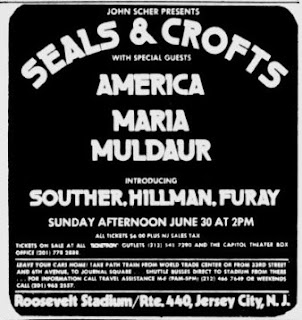 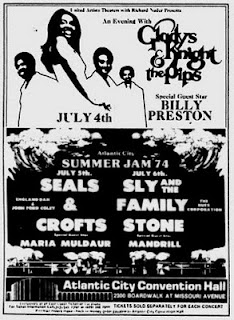 (an ad from the June 20, 1974 Village Voice for a concert at the Atlantic City Convention Center on July 5, 1974, featuring Seals & Crofts and Maria Muldaur. h/t Streets You Crossed for the clips)

(Note: My lengthy series on John Kahn's live performance history is only on Part IV, but for research reasons I am jumping ahead to do this piece now. Eventually Parts V-VIII will appear and complete the story up to this point)

By mid-1974, Jerry Garcia and Merl Saunders were a regular attraction in Bay Area nightclubs and concert halls, yet they were little more than a rumor elsewhere. In fact, the Garcia/Saunders aggregation had made their East Coast debut the year before, playing a private party on September 5, 1973 and the Capitol Theater in Passaic, NJ the next night, but they still had not played New York City proper. Rather oddly, they played a three night stand at Manhattan's Bottom Line club on July 2, 3 and 4, 1974. These three dates have always glared out at me as a strange anomaly, but a closer look at newly discovered evidence makes the Bottom Line shows seem fairly logical.

I had always vaguely assumed that Garcia, Saunders and their group had been flown to New York for some kind of showcase, but I could never figure out for what. Thanks to the exhaustive chronicling of Tri-State Area rock ads in the wonderful All The Streets You Crossed blog, however, it is clear that only one person--Merl Saunders--needed to be flown in for the Bottom Line shows. I had known that the Grateful Dead were ending their tour in Springfield, MA on Sunday, June 30. However, I did not realize that not only was John Kahn on tour with Maria Muldaur during this period, it appears that the Muldaur tour had a break between Sunday, June 30 and Friday, July 5.

Given that Monday night (July 1) was "musician's night off," when clubs are closed, Tuesday through Thursday (July 2-4) was a prime opportunity for Garcia and Kahn to book a show and make a little money. By using Bill Kreutzmann on drums, and with Garcia crew members  Ramrod and Steve Parish already on the tour, the four of them could meet Kahn in New York. All that would have been required was Merl, and he must have been flown in for the shows. An organ would have been rented, and since the Garcia-Saunders band did not use their own PA, save for Jerry's guitar and amp and Billy's drums, the Dead's equipment could begin the long journey home to California. 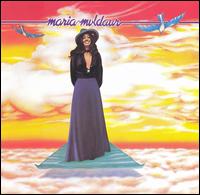 Maria Muldaur On Tour
Maria Muldaur had released her self-titled debut album on Reprise Records in late 1973. However, the album did not really take off until some months later, when the David Nichtern song "Midnight At The Oasis" became a hit single. The song peaked at #6 in April, 1974, spending 14 weeks on the Billboard charts. As I discussed in Part VII of this series (not really--I haven't written it yet), Maria Muldaur had been touring in support of the record since at least October 1973, and John Kahn had been a member of her band since December of that year. Muldaur had had an engagement at the Boarding House in San Francisco from December 27-31, 1973, and not only had headliner Country Joe McDonald canceled due to an accident, but her bass player got food poisoning, so Kahn had been drafted at the last second. Kahn learned "20 songs in an hour," according to Muldaur, and saved the day with his exceptional bass playing.

In the 1970s, the record business was extremely profitable, and both companies and artists focused on touring as a means of increasing record sales. The Grateful Dead were a dramatic exception to this, and never more so than in the 1970s. As the 70s dawned, FM radio featured somewhat quieter music, and the most successful albums were by "singer-songwriters," a euphemism for melodic, mellow music that was shorter and more accessible than the harsher, longer and louder music of the 60s. While Crosby, Stills and Nash kicked the trend off, the Dead themselves benefited, in that the "country-rock" sounds of Workingman's Dead and American Beauty received more FM radio airplay than either their previous or future efforts.

In the early 1970s, solo artists tended to be more prominent than new bands, all of them singers if not actually songwriters. While these solo artists toured with full electric backing bands, few of them had a permanent working band. The few that did have a regular working lineup, like Bruce Springsteen and Bob Seger, tended to be on the harder rocking side. Most artists toured intermittently and hired sidemen for each tour, or each leg of the tour. The band members received a weekly wage while on tour, but had no equity stake in the success of the album. This suited artists and record companies, since profitable bands wouldn't break up because the drummer was mad at the organ player, or other such "creative differences." Backing musicians had greater freedom to pick and choose their opportunities, but they had fewer financial and creative chances to hit it big. As a result, most 70s solo artist worked with a rotating cast of players, adding and subtracting different musicians as circumstances warranted.

When John Kahn had joined Maria Muldaur's band, it had featured guitarist David Nichtern, who had written "Midnight At The Oasis," pianist Jeff Gutcheon and drummer Bobby Mason. I do not know who Kahn replaced as bassist. As I discussed in Part VI (pretending, for a moment, that I have already written it, ha ha), Kahn had met Maria when he had played on the 1972 Pottery Pie album recorded with her then-husband Geoff Muldaur. However, Geoff Muldaur had been the driver on that project, and Maria and John seemed to have had little contact. Once Kahn joined the band on an emergency basis at the end of 1973, however, he seemed to take over as the regular bassist for her group.

Unlike "road dog" aggregations like Bruce Springsteen And The E Street Band or the Grateful Dead, who toured constantly, Maria Muldaur seems to have focused on playing periodic engagements in key markets. She headlined a week in Denver from January 29-February 2, 1974 at the Ebbetts Field club, and seemed to have played a few other engagements too, but she does not seem to have been on the road continuously. Thus while Kahn would have been busy dividing his time between Maria and Jerry, the conflicts would not have been insurmountable. In any case, if Kahn had not been available for a date or a leg of a tour, another bassist would have simply substituted for Kahn, possibly the same one that he replaced in the first place.

By mid-Summer of 1974, "Midnight At The Oasis" was a sizable hit, and Maria Muldaur's management would have been looking to cash in somewhat on her success. Thus Maria performed as part of multi-act shows at some more sizable venues. On June 30, 1974, while the Grateful Dead were in Springfield, Maria Muldaur was on the bill in Jersey City at Roosevelt Stadium, where the Dead would play five weeks later. Seals & Crofts ("Summer Breeze") headlined, with America, Maria Muldaur and the newly-minted Souther Hillman Furay Band filling out the day. After the Bottom Line shows on July 2, 3 and 4, Muldaur was second on the bill to Seals And Crofts at the Atlantic City Convention Center on Friday, July 5, along with openers England Dan & John Ford Coley. All of the artists on both shows were on record labels associated with Warner Brothers, yet another marker of the prevalent promotional strategies of the time.

I have yet to uncover any performances by Maria Muldaur between July 5 and July 21, and I doubt that there were any. Per the practices of the day, Muldaur's touring would have been financed by advances from her own future royalties, so essentially she would have been loaning money to herself in order to perform live, so exposure was more important than merely playing lots of shows. On July 21, 1974, however, she opened for the Grateful Dead at the Hollywood Bowl, and a fine audience tape exists. Her band for July 21, besides Kahn (whom she introduces as "The Captain, John Kahn") and pianist Gutcheon, features guitarists Amos Garrett and Stephen Bruton, and a drummer whose name I didn't catch. The band plays excellently, but rather sloppily, not at all like a road-hardened band who has been knocking it down night after night. Was this the same lineup that played the East Coast earlier, or were Garrett and Bruton last second replacements for David Nichtern? Either possibility would be par for the course.

Thus the Garcia-Saunders show at the Bottom Line in Manhattan was perfectly logical from the point of view of the musicians. John Kahn was going to be in the New York area the entire week, and Garcia was already on the East Coast. Since Kreutzmann, Ramrod and Parish were already there too, and everybody's instruments, all that was required was Merl Saunders and a rented organ, and the gig was on. Under the circumstances, its not surprising at all that Maria Muldaur made her first guest appearance with Jerry Garcia on July 2. Singer Ellen Kearney, a friend of Muldaur's, also dropped by. Another guy dropped by one night, a guy named John Lennon, to thank Merl for being the first to record "Imagine." He was invited back to the next night's soundcheck to rehearse a few songs, but he did not show. Garcia had speculated that the Hell's Angels hovering around the backstage area may not have seemed welcoming, but a forthcoming book promises to identify Lennon's activities in great detail, so maybe we will know what took precedence over  sitting in for "Money Honey" or something similar.

Update: it seems that the actual dates for the Garcia/Saunders Bottom Line shows were July 1-3, rather than July 2-4. As definitive proof, thoughtful reader Paul sends in his ticket stub from July 1, 1974


Appendix: The Bottom Line
The Bottom Line was on 15 West 4th Street in Greenwich Village. It had opened in February, 1974, right in line with other rock clubs around the country that were nicer and more attractive than the sawdust covered dumps where bands had usually played. This reflected both a more serious attitude towards the music by rock fans and a gradual shift to an aging, more well-to-do audience willing to pay a little more money and buy drinks in return for a nicer concert experience. During this time, record companies were focused on showcasing their new acts, so playing clubs like The Bottom Line or The Roxy in Los Angeles were essential for creating a "buzz" that would increase FM radio airplay and thus record sales. Like most big city nightclubs, The Bottom Line tried to stay open most nights of the week, and given that it was New York, almost all the performers were "name" acts with albums to their credit.

Despite the Grateful Dead's growing popularity on the East Coast, Garcia and Saunders only played single late shows on each of the three nights. The early shows featured Steeleye Span and Pousette Dart Band. Steeleye Span were an English folk-rock band, then on Chrysalis Records, broadly in the vein of Fairport Convention, while the Pousette-Dart Band was, at the time, a string band from Cambridge, MA (they would later release soft-rock albums in the mid-70s). None of either the groups' members would likely have been in the club when Garcia and Saunders performed, since touring musicians would not waste a night in Greenwich Village sitting around the place they were playing. Manhattan stays open late, however, so Garcia, Kahn and the rest of the gang probably did not reach the stage any time before midnight, still free to take their time to give the Village their first taste of Keystone Berkeley.
Posted by Corry342 at 4:53 PM