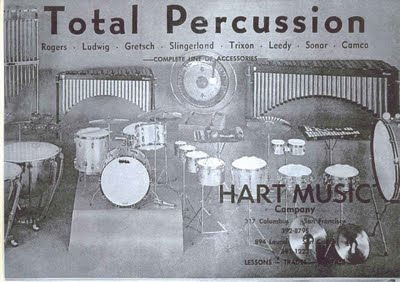 This is an ad for Hart Music, the drum store Mickey Hart managed along with his Father Lenny Hart, at 894 Laurel Avenue in San Carlos. I have speculated elsewhere about whether Mickey was playing with any bands while managing the store from 1965 to late 1967, when he joined the Dead after jamming with them at The Straight Theatre on September 29.

The source of the ad is a book called The SF Band ID Book, an effort to provide a sort of "phone book" for agents or others looking to hire bands. The book, about 40 pages long, features pictures, profiles and contact addresses for San Francisco and Bay Area bands circa Fall 1966. The most well-known bands, such as The Dead, Big Brother or Quicksilver have been profiled many times, but the Band ID book is one of the few sources for photos of groups like The Canadian Fuzz or The Generation.

There are also a few ads from various purveyors of goods and services. Its a nice irony that Hart Music is advertising in the book, but its also good business, since many of their clients would have been in the book also. I do note from the ad that Hart Music seems to have a San Francisco address also, at 317 Columbus, as I have never heard anything about a San Francisco branch of the store. It is interesting to note the display in the ad, as well, as it does remind me of the Grateful Dead drum-percussion set up of the late 1970s--all that's missing is a kit for Billy.
Posted by Corry342 at 11:50 AM