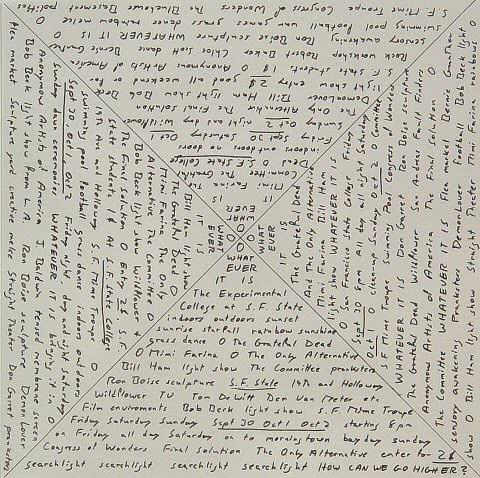 A partially successful attempt at a three-day multi-media event 48 years ago was also the last of the Acid Tests (albeit a subsequent “Graduation” was held).  The campus of San Francisco State College became hosts to the Merry Pranksters, the Grateful Dead and a number of other performers that weekend. Without going in to any great detail here, the likely most significant point about the following list is the demystification of what the Grateful Dead were doing that weekend. There are three separate confirmed performances not properly documented elsewhere (as far as I know).


International Room:  Grateful Dead, The Only Alternative and His Other Possibilities with Mimi Farina, The Light Castle


Men's Gym: The Merry Pranksters, Don Buchla. A planned Jefferson Airplane and Paul Butterfield Blues Band after midnight performance in the Men’s Gym was never held due to Police intervention.


Common's Lawn: Grateful Dead, The Only Alternative and His Other Possibilities with Mimi Farina, The Committee, Congress Of Wonders 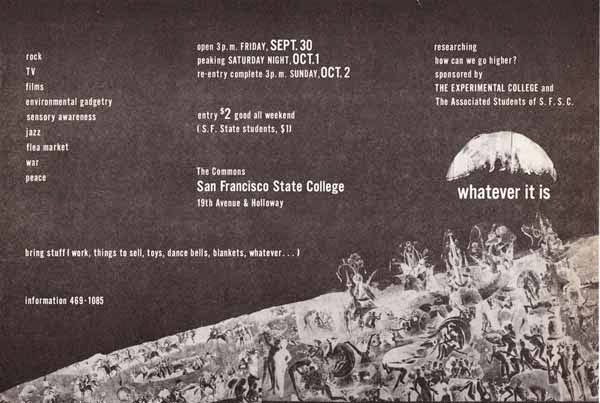 [
The 2013 release of Dave's Picks Volume 6, featuring a performance by the Grateful Dead at the Old (original) Fillmore on Saturday, December 20, 1969, was very well received. A bonus disc, with additional material from the next day's show on Sunday, December 21, 1969, added to the feast. It was a reminder of how many shows the Grateful Dead played back in the day, a hard working band always ready to put out. Amazingly enough, however, the Grateful Dead not only played a hot weekend at the Old Fillmore, they were scheduled to play an outdoor benefit show on the Monday after the weekend. Did the Grateful Dead really play a Monday afternoon show in an empty field in Napa, on December 22, 1969? They certainly advertised the show, and there is no reason to think they didn't play.

The Scenedrome entertainment listings of the December 19, 1969 Berkeley Barb yielded the unexpected information that the Grateful Dead would headline a benefit concert on Monday, December 22 in  the Napa Valley. In its entirety the listing (above) says

[This is a re-post of a long-ago entry]

The Dead had played The Old Fillmore on December 19, 20 and 21 (Friday, Saturday and Sunday), and did not have a gig until Texas on December 26. While non-Californians may wonder at an apparently outdoor concert on a Monday in December, remember that many people are on holiday during Christmas, and daytime winter temperatures in Napa are about, oh, 65 degrees or so. This show would be very plausible in terms of the Grateful Dead touring schedule as known.

As near as I can tell, the location would have been in between Napa and Sonoma, and somewhere in the vicinity of Napa Road and Burndale Road, probably near the current location of the Homewood Winery. In those days, Napa was fairly rural and agricultural, so while hippies may not have been entirely welcome, they would have been mainly only bothering cows (and the occasional race car at Sears Point International Raceway, just a few miles South).

What is particularly rare about this show is that it may represent a 1969 show by Quicksilver Messenger Service. There is no good Quicksilver tour history on the Web yet, but this would be only the 8th known show of 1969. The band definitely included John Cipollina, Nicky Hopkins, David Freiberg and Greg Elmore. Dan Healy occasionally played guitar and bass on stage with them during this period, as well. Gary Duncan and Dino Valenti would rejoin the group on New Year's Eve, though perhaps they used this as a warmup gig. Their album Shady Grove had just been released in December.

People! were a San Jose band, although they had not achieved much beyond their 1968 hit single "I Love You." People! did have some South Bay connections with the Dead, as bassist Geoff Levin had played bluegrass with Jerry Garcia and David Nelson around 1964 (check out photo # 1/22 on Levin's site). Rejoice is a common band from bills at the time, and The Loading Zone were old friends from the early days of The Fillmore.

The Yellow Shark was on the case, as always:


The show was actually a benefit for St. Mary's College High in Berkeley, and possibly other high schools that were responsible for sponsoring the event. I have a handbill somewhere - but have not seen it for years. Whilst it was common for high schools to sponsor shows in the 60s (proms, fundraisers etc.) they were generally held at the school itself or somewhere reasonably near by. What seems odd here is that the event was being held 40 miles away from Berkeley - which leads me to think there may have been other schools or colleges involved. A snippet appears in the December 13, 1969 Oakland Tribune: "St. Mary's College High in Berkeley is participating in a high school-sponsored rock festival to be held Dec. 22 at the Napa Valley Sports Camp. The 40-acre site is located about five miles west of Napa on Highway 12 in Brown's Valley. Groups scheduled to appear are The Grateful Dead, Quicksilver Messenger Service, Rejoice, The People and The Loading Zone. Booths selling food and merchandise will be located throughout the site for the duration (9 a.m.- 5 p.m.) of the festival. Tickets are now available at St. Mary's."

What Was The Napa Valley Sports Camp?
Based only on the thin evidence that I have uncovered here, it appears that the Napa Valley Sports Camp was an outdoor area for some affiliated urban private high schools to use for athletic activities. I have no idea what they actually did there--does anyone play Capture The Flag anymore? In any case, I suspect that whatever casual athletic activities were undertaken would no longer be allowed. Not that it would matter, since land in that part of Napa Valley is so valuable it would never be rented as a relatively empty field. Today, the area is vineyards, farms or expensive homes, but no large, empty fields, that's for sure. Napa County was an agricultural area in 1969, with only the faintest hints at the wine and hospitality mecca that the area has become today.

The connection between private East Bay high schools and psychedelic Fillmore bands seems odd as well. Nonetheless, I do know that by 1969, many high schools had regular dances where Fillmore rock bands appeared. The Grateful Dead, for example, had played at Campolindo High School in Moraga in May of 1969. Further south, in the Fall of 1968, Quicksilver Messenger Service and Santana played the same dance, incredible as it may seem, at Los Altos High School. St. Elizabeth's High School in Oakland, high in the hills, and very likely to have been a co-sponsor for this event, had a surprising number of pretty hip bands that played dances there, so the connections ran deeper than we may think.

I have to think that the schools were looking to have a joint fundraiser, and turned to the bands to help out. I suspect the bands took a reduced rate, possibly just some sort of expenses. Since it was a Monday afternoon, none of the groups would have been working. If the Dead were willing to bring their sound system, having just unhitched it from the the old Fillmore the previous night, everything would have sounded pretty good.

It's a strange thought--the Monday afternoon before Christmas, a bunch of high school kids in a mostly empty field, in a bucolic setting, goofing off while Fillmore rock legends are jamming away. I checked out the weather, and it reached 55 degrees, with only the slightest hint (0.01 inch) of rain. So it was probably a pretty good day for a concert, as December days go.

Did it actually happen? The high school kids were probably too busy chasing each other, and the Dead and Quicksilver didn't seem like that big a deal to them, since they played high school dances on occasion. I don't know of any eyewitness account. Of course, a tape might be definitive, but none has surfaced yet. One of America's leading scholars suggested that an undated fragment could belong to this date, so perhaps there may be some lost piece of tape waiting to surface, a memory of a multi-school dance on a December afternoon in a distant rural county.
Posted by Corry342 at 6:00 AM 3 comments: