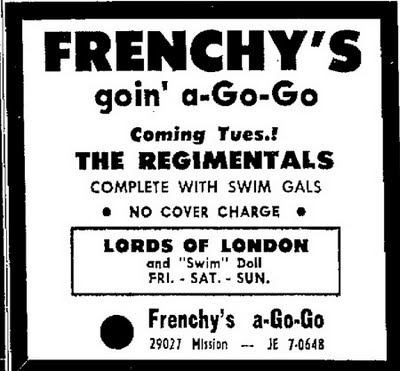 The first gig of The Warlocks was May 5, 1965 at Magoo's Pizza in Menlo Park. They played every subsequent Wednesday in May. It rapidly became clear to other band members that bassist Dana Morgan, Jr had to go, and Jerry Garcia invited his friend Phil Lesh to join as bassist. Lesh saw the band at Magoo's (probably May 26), and he was in. Never mind that Lesh didn't play bass--Garcia showed him the notes, and Lesh figured out the rest.

The first gig of The Warlocks with Phil Lesh--the original Grateful Dead quintet of Garcia, Lesh, Bob Weir, Bill Kreutzmann and Ron "Pigpen" McKernan--was at a Hayward club called Frenchy's. Frenchy's (at 29027 Mission Blvd in Hayward) was an oddity, the hippest club in an unhip area, which I have written about elsewhere. According to legend (Dennis McNally and Phil Lesh tell the same story), the fledgling Warlocks were hired for a three-day engagement at Frenchy's, and after a night of weird, stiff rhythm and blues they came back the next evening to discover they had been replaced by an accordion-and-clarinet duo (McNally, p.84). The Warlocks retreated to rehearse and lick their wounds, and began their assault on the Peninsula and the World in August, 1965.

I had hoped that I would find some trace evidence in the local papers of The Warlocks gig, but so far I have found none. This ad is from the June 18, 1965 edition of The Hayward Daily Review, the main local paper, in which Frenchy's had a prominent ad every week. As you can see, the featured act is a group called Lords Of London. Given that Frenchy's was the sort of venue that was open early and late, my guess is that The Warlocks and the "accordion-and-clarinet duo" were in effect opening acts. As a practical matter, they may have alternated sets or something with the headliner, but an unknown band from Palo Alto probably did not ad any value to the marquee, and in any case may have been added too late to promote.

I do not know who the Lords Of London might have been. There was a somewhat popular Canadian band called Lords Of London, who had a 1967 Canadian hit "Cornflakes And Ice Cream." Based on the biography, however, the band broke up before they could tour California. The members later morphed into Nucleus and then A Foot In Coldwater, who had a few Canadian hits in the early 1970s. The group would still have been in High School in Ontario in 1965, and a stealth tour would seem out of the question.
Posted by Corry342 at 5:57 PM