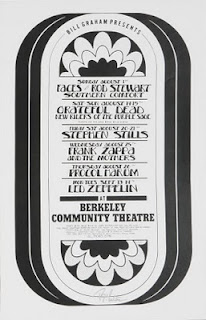 Back before Deadbase and the Internet, one of the few ways to learn about Grateful Dead historical events was chatting up strangers between sets at shows. While I heard many tall tales, I also heard many things that turned out to be true, and at times it gave me a clue to know what I was looking for when more sophisticated research became possible. I particularly recall chatting with someone in the lobby of Marin Veterans Memorial Auditorium in San Rafael in 1983 or '84. He told me about seeing the Grateful Dead at Berkeley Community Theater in August 1971, and seeing a piano player sit in for most of the show. He concluded by saying "the next year, I realized it was Keith Godchaux." He was very clear eyed and convincing eyewitness, not one of those people who told stories like "my brother said he saw Jerry jamming with Frank Zappa and Pink Floyd at a bar on 46th Street!"

I pursued this for a few years, but I largely reached a Dead end. As the whole story of the Godchauxs became clearer by the mid-80s, it became plain that the mystery piano player wasn't Keith. A knowledgeable person suggested that it very well might have been Vince Guaraldi, a San Francisco jazz pianist whose wife worked in the Grateful Dead office in the early 1970s, and I cherished this theory for a while. Then I was left stumped when I finally heard some tapes, and I couldn't hear any piano. Was my informant deluded? I had talked to plenty of goofy stoners, and he didn't seem to be one of them.

Ultimately, a David Gans interview broadcast on KPFA (on February 3, 2001) solved the mystery. It had been long-time Dead associate Ned Lagin on electric piano at Berkeley. Gans's interview revealed that not only had Lagin sat in with the Dead numerous times in the early 1970s, he was never plugged into the PA, so while his piano was audible to the musicians and the audience, it was not present on any soundboard tapes. I do not know enough about gear and recording to say whether this was a typical configuration or a specific choice by Lagin, but it means that a number of Grateful Dead performances need to be viewed in a different light. This post will attempt to document which shows might need reconsideration, although more focused ears than mine will need to provide the analysis (you know who you are).

Ned Lagin
Ned Lagin was a trained jazz musician raised in New York City. While going to college at MIT, training to be a biologist, he attended a Grateful Dead concert (probably at either The Ark or Boston Tea Party, which were actually the same place) and was duly impressed. He wrote a letter to Jerry Garcia, as had so many others. Unlike the rest of us, however, when the Dead came to MIT in May, 1970 the Dead were looking for him and so Jerry, Phil, Pigpen and Mickey spent an afternoon hanging out in Lagin's dorm room prior to the concert (the dream of all college-age Deadheads from 1967 to 1995, but I digress).

As a result of his MIT meeting, Lagin was invited out to San Francisco, and that Summer he played on American Beauty. Ned Lagin is best known today for his Seastones project with Phil Lesh, a unique electronic music experiment. There were two local concerts that I am aware of (Palace of Fine Arts in San Francisco November 28, 1973 and Dominican College, San Rafael June 6, 1975), both of which featured Jerry Garcia and others as special guests. From June 1974 onwards, Lesh and Lagin would appear between sets at Grateful Dead concerts, playing their unique brand of music on the "Wall Of Sound," sometimes joined by other members of the Dead. On occasion, Lagin would remain on stage playing electric piano as the band morphed from electronic music to regular Dead material. To my knowledge, Lagin's playing was not recorded on the circulating board tapes (although I will defer to experts as to whether that was always true).

Gans's 2001 interview was wrapped around a broadcast of a studio recording from Ned Lagin's birthday party on March 17, 1975, featuring Lagin, Garcia, David Crosby, Lesh and Bill Kreutzmann, jamming on the chord changes to some David Crosby tunes. This tape had circulated in various forms, but this was far and away the best version. Lagin had been making his living via means other than music (he was an MIT trained biologist, after all), and he had been largely invisible musically since 1975. Gans's interview, however, revealed that Lagin had played at considerably more Grateful Dead concerts than had been realized, and I will attempt to document those appearances here.


The first time I performed with the Grateful Dead, was at Boston University in 1970. That is true, I can’t be heard and that is because while I was heard onstage and in the immediate present, I was not plugged into the P.A.


That was a concert that was in a gymnasium at Boston University, and there had been counterfeit tickets sold. So before the concert started, as they just started letting people in, it was realized that there were more people than there was room in the hall, and a short riot ensued, where the band was trapped onstage and people were basically running amok. And, in fact, the Boston Tactical Squad – the riot squad – was called out to straighten things out.

Presumably Lagin was playing a Fender Rhodes electric piano, itself probably a first for the Dead. Since there is only a brief (21 minute) soundboard and no audience tape, Lagin's performance at this show remains a mystery.


There were several other times where the same thing is true – that I can be minimally heard or not heard ‘cause I wasn’t plugged into the P.A. The times that the band returned to Boston in ’71, I played or sat in at the Music Hall.

Spectacular Betty boards exist of these shows. Was Ned Lagin on stage playing Fender Rhodes electric piano for some of it? April 8, 1971 has a particularly spacy second set beginning with Dark Star. Was the band responding to an added yet unheard to us musical voice?

The Dead returned to the Boston Music Hall on December 1 and 2, 1971, and its possible that Ned Lagin made an appearance. In the Gans interview, however, he says "this was in the period of time when T.C. had left the band and it was before Keith had joined the band," so it seems less likely. Nonetheless, the second set of December 1, 1971 begins with "spacey jam"--a Lagin marker, perhaps?

Gans and Lagin have resolved my Berkeley Community Theater mystery, and my original interviewer did not have a brain fade, even if the piano player did not turn out to be Keith Godchaux.  However, this does put the tapes in a different light. Based on my eyewitness and general comments from Lagin, Ned's contributions were focused on numbers with a heavy improvisational component, like "The Other One" or "Dark Star". Some of the most interesting jamming on these two nights may in fact be only a partial document of what was heard in the crowd, but without an audience tape its impossible to say.

Lagin's remark about coming to the Bay Area and playing in 70, 71 and 72 suggests that he made intermittent appearances at various concerts at Fillmore West and Winterland as well, presumably even with Keith on stage.


I had an interesting and close relationship with Pigpen, which has never really much been talked about. Pigpen has this aura of the blues musician and the Hell’s Angel relationships. But he was a very, very interesting and interested person. And as I said, when we were hanging out at MIT Pigpen was there hanging out. He thought I was like the Mr. Wizard science kid. But he read a lot and knew a lot, and we hung out together. And he – like at Berkeley Community Theater and at Portchester and other places – if I was standing next to him on the organ and they were gonna go into “The Other One,” or “The Eleven,” or some of the other larger, longer jams, he would have me sit down at the organ or he’d push me into the organ. A lot of times I was in the shadows.

This quote offers some tantalizing evidence, and further mysteries. It appears that Lagin may not have been very visible at all from the audience, even when playing piano. More interestingly, it seems that Pigpen would invite Lagin to play organ on some of the more improvisational numbers. This means that Lagin may be quite audible, as Pigpen's organ was not separated from whatever feed went to the soundboard.

I have a laser-like focus for buildings, addresses and calendars, which is why my blogs focus on them. I find great music so powerful, however, that whenever I listen I am transported. As a result, I am America's worst comparer of tapes, since I get carried away and can never remember what I was listening for. Thus, I can only wonder if anyone else has noticed some exceptional organ playing on some of the big jams at the following shows, which might indicate an audible Ned Lagin performance.
Unlike the other dates, where we have to wait in vain for audience tapes to surface, many of the shows listed above do have circulating board tapes, and a good listener might find persuasive evidence that Ned Lagin was playing organ instead of Pigpen at certain times.
Posted by Corry342 at 10:08 AM