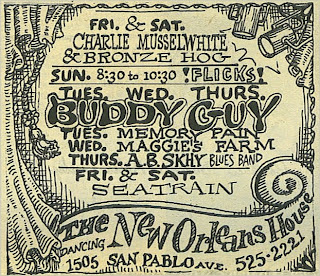 (a scan of the Berkeley Barb ad for The New Orleans House in Berkeley, from June 7, 1968, featuring a June 11 appearance by Memory Pain)

I have been working on a series of posts detailing bassist John Kahn's live performance history separate from his work with Jerry Garcia. In my first installment, detailing Kahn's move to San Francisco in late 1966 and his subsequent activities through the end of 1968, I mentioned that Blair Jackson had learned that Kahn played in two original rock bands during that period, The Tits And Ass Rhythm and Blues Band and Memory Pain. I recited what little information I was able to learn about both those groups, which was meager indeed: a single surviving ad for each band, and a few vague details about who might have been in the groups.

Fortuitously, however, I was contacted by Bob Jones, a long-time Bay Area musician who was in both T&A and Memory Pain with Kahn, and he was kind enough to share considerable details about those bands. Rather than expand the previous post beyond its current bloated size, I felt that Jones's information was worthy of a post of its own, before we move on to Kahn's work in 1969, when the fun really begins. I will recap a little of the previous post for context, but for a fuller picture of John Kahn up to 1968, readers will need to review the previous post.

The Tits And Ass Rhythm and Blues Band
In 1967, John Kahn had switched from playing electric guitar and string bass to playing electric bass in a cover band. Like most creative musicians, however, it appears that he was more interested in playing music of his own choosing, even if it included a share of cover versions. Somewhere, Kahn met Bob Jones. Even Jones doesn't remember where, although he thinks it may have been at a 1967 jam session held by the Anonymous Artists Of America, where Mike Bloomfield was also present. The AAA were a Santa Cruz Mountains band who moved to San Francisco in mid-1967 (and are worthy of a series of posts on their own terms, but on another blog).

By 1967, Bob Jones had already been in a successful band called The We Five, best remembered for their folk-rock hit "You Were On My Mind." They toured and recorded successfully from about 1965-67, but their sparkling harmonies and short song were engulfed in a wave of bluesy psychedelia. Jones played guitar and sang harmonies, and played a critical role in the band's arrangements. He promptly formed another group. Jones (via email):


After We Five, John Chambers ( We Five's Drummer ) and I were determined to only play Stax Volt style R&B.  We first formed "The Mystic Knights of the Sea", an R&B horn band.  This did not go that well, but did have Ron Stallings as the tenor player and one of the singers.  Ron and I did a lot of Sam and Dave material because, well, we could actually do the harmony.  The band lived with their old ladies and children on 17th street in the Haight.

This morphed into the T&A Band.  At this point we had added John as the Bass Player.

At any rate, we got John in the band and we all moved into a flat on Oak Street, just east of Haight.  So, John, me and my wife and kid, Ron Stallings and John Chambers and his wife and kid all lived in the same flat.  Believe it or not, a racially mixed band was still a hard thing to do in those days.

Anyway, I played guitar, Kahn bass, Chambers Drums and Stallings Tenor.  Me and Ron sang.  We did other gigs especially a lot at the Sausilito Ferry club, the Charles Van Damme.

Deadheads and 60s music fans may recognize a few of these names. Drummer John Chambers was a touring member of We Five (they did not change their name to We Six), and would later play in The Loading Zone and then the Elvin Bishop Group, among others. Ron Stallings (1946-2009) had been in the San Francisco Mime Troupe in the mid-60s, and in 1979 he would turn up playing tenor sax in Reconstruction, with Jerry Garcia and John Kahn. He also was part of the horn section for latterday lineups of Huey Lewis And The News, and played in many Bay Area aggregations throughout his life.

The Charles Van Damme was a grounded Ferryboat in Sausalito harbor, known under various names, but most famous in the 60s as The Ark. I had thought that the 'T&A' name was a reference to playing strip clubs, but Jones says the name was just an effort to stand out amongst the numerous cleverly named groups of the time. However, the only actual advertised date I have been able to recover for the T&A band was at Berkeley's New Orleans House, on December 15-16, 1967. It's worth noting that even in liberal Berkeley, advertising in the radical Barb, the club chose to bowdlerize the name to 'T&A,' a sign that even the 60s had limits.

Over time, however, the Tits And Ass Rhythm and Blues Band fell apart. Jones:


Eventually Chambers did not see eye to eye with me and Kahn about material and arrangements and the group broke up.  Kahn started taking me to jams at the Heliport on the condition that I borrow some of Chambers' drums and play drums.  I protested "but I'm not a drummer".  John kept saying "I've heard you play and you play just like Al Jackson ( Booker T's Drummer )".  You don't overplay like everyone else but you just groove."  So I went to these Jams where it was Charlie Schoning on organ, Kahn on Bass, me on drums and Fred Burton ( later Southern Comfort's guitarist and co-leader of SC with me ) on Guitar.  Somehow this band changed into Memory Pain because I wanted to do so much Percy Mayfield material.  Ira Kamin became the organ player.

During this time and well into "Live at Bill Graham's Fillmore West" John and I got together a lot, played scales(!) and wrote songs.  Many of them ended up on the SC album.  We were very close and thought alike on many things both musically, politically and socially.

I think it might be a little inaccurate to describe T&A and Memory Pain as "lead" by John.  We were hippies and doing our best to have bands be democracies ( which lead to a lot of problems and resulted in a lot of inaction ).  Because we were both quite opinionated, John and I had the most influence on what, how and where we played.

Fans of the Jerry Garcia Band know that John Kahn found and hired the musicians--with Jerry's approval, of course--and it is telling that Kahn liked a spare, swinging pulse long before he found Ronnie Tutt. Although Tutt was the archetype for a Jerry Garcia drummer, in general the band favored versatile drummers who tended to underplay rather than overplay, a distinct (and intentional) contrast to the double drum assault of the Grateful Dead. It's particularly revealing that Kahn's ears were sharp enough to recognize a great drummer even before the player himself did, since Jones initially saw himself as a guitarist who was just fooling around on the drums.

Charlie Schoning was the keyboard player for The Anonymous Artists Of America. He had a very interesting history as well, coming to the Bay Area in 1965 from Tacoma as a member of The Frantics, who evolved into Luminous Marsh Gas (a Moby Grape precursor). Schoning would go on to play in groups like Quicksilver Messenger Service under the Nom Du Rock Chuck Steaks.I have only been able to identify a single advertised Memory Pain show so far, on June 11, 1968 at The New Orleans House, opening for Buddy Guy (the Barb ad is up top). It seems that the eventual iteration of Memory Pain was
I don't know anything about Ira Kamin's background, beyond his association with the Bloomfield/Gravenites axis.

Without getting too far ahead on the John Kahn story, Jones and Kahn became the primary rhythm section for Mike Bloomfield and Nick Gravenites, who limited their playing to the Bay Area, and organist Ira Kamin was usually part of the Bloomfield band as well, at least in 1969 and early 1970. In mid-1969, Jones and Burton formed the group Southern Comfort, who released an album on Columbia in 1970. The Southern Comfort album was John Kahn's first producer's credit on an album. Kahn co-produced the album with Nick Gravenites, and the band recorded some songs written by Kahn and Jones during 1969. Southern Comfort's lineup was
Kahn was the producer of Southern Comfort, and played keyboards on a few tracks, but the bass chores on the album were handled by Bob Hubermans. Art Stavro seems to have replaced Hubermans, and then Karl Severeid replaced him.

John Kahn and Bob Jones 1969
Mike Bloomfield, despite having walked away from the Butterfield Blues Band, Super Session and the Electric Flag, was still a big star. Great guitar players were bigger than ever, and Bloomfield was as good as it got. I also think that Bloomfield owed albums to Columbia as a result of how he departed Electric Flag in mid-1968, but Bloomfield's management situation was very tangled and can't be addressed here. In any case, Bloomfield was planning to record with Columbia, with Nick Gravenites acting as producer. Bloomfield did not like to leave home much, so his early 1969 shows were generally limited to The Fillmore West. Kahn and Bob Jones became the rhythm section for Bloomfield, and it seems that Memory Pain evolved into Southern Comfort. The exact timing of this evolution is uncertain.

Southern Comfort bookings start appearing in September 1969, so presumably Memory Pain ground to a halt sometime before. I am still working on this angle of the saga, but I will try and give a substantial picture of John Kahn's live activities with Mike Bloomfield in the next installment.

Bob Jones, meanwhile, continued working with Mike Bloomfield long after John Kahn had switched his primary attention to Jerry Garcia. Jones also had a substantial performing and recording career throughout the 1970s. He cut back somewhat on music in the 1980s, though not entirely, and ultimately returned to Oahu, where he was born, and he continues to perform regularly in Hawaii. Jones's most recent production is a tribute to Michael Bloomfield by his band Bob Jones And The Drive, and Jones is ideally equipped to know how Bloomfield liked it to sound.