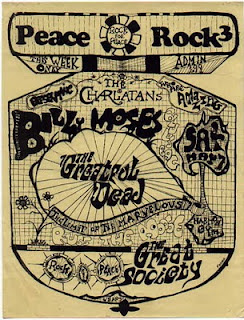 (a poster for the Grateful Dead's May 7, 1966 concert at UC Berkeley's Harmon Gym, home court of UC's California Bears)

Some methodological tracks lead down a distant spur to an isolated railhead, but that doesn't mean the view still isn't nice from there. I looked into the history of the Grateful Dead playing the home arenas of various college basketball home courts. This revolutionary and sophisticated interdisciplinary methodological research approach revealed nothing. Oh well. This post features a list of the times that the Grateful Dead played the home basketball courts of the Pac-10 Conference schools. I don't know what purpose this serves, but here it is--maybe if you are stuck on your NCAA brackets in March, this will help you make random selections.

Some Ground Rules
I looked at Grateful Dead appearances at the home basketball courts of schools in the Pacific 10 Conference. Up until 1978, the conference only had 8 teams, and the conference was known as the Pac-8. I am only looking at primary home courts. I realize that many college basketball teams play occasional "home" games at the arenas of nearby big cities (e.g. University of Washington playing a game at Seattle Center), but I was not pursuing that line of research. There are some unique aspects with respect to the University of California, but I address those below.

This line of research, unproductive though it was, was about basketball conferences and not universities per se. I am aware that the Grateful Dead played these campuses many times in non-basketball facilities, but I was not attempting to analyze that information. 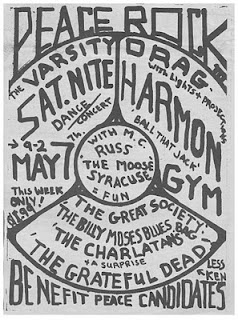 (an alternative flyer for the May 7, 1966 Harmon Gym show (h/t Yellow Shark). Note that the Grateful Dead's appearance says "Less Ken," presumably indicating that Ken Kesey would not appear)


University of California at Berkeley-Cal Bears
Harmon Gym (14 Frank Schlessinger Way, Berkeley, CA)
May 7, 1966
UC Berkeley's Harmon Gym was built in 1933, and it felt like it. The facility had a basketball capacity of about 6,000. For the benefit of foreign readers, when rock concerts are held in basketball arenas, the stage is generally at one end of the court. Fans are allowed on the court in front of the stage, but the seats behind the stage are usually blocked off to create a backstage area. Thus the basketball capacity of a facility generally roughly equals the concert capacity, even though the configurations are different.

Harmon Gym was used for concert events up until about mid-1967. Bill Graham used it a few times, when he was blocked out of the Fillmore out of consideration of the synagogue next door. The Dead played Harmon on May 7, 1966, along with The Charlatans, The Great Society (with Grace Slick) and The Billy Moses Blues Band. The show was a campus event entitled "Peace Rock 3." After 1967, the campus stopped using Harmon Gym for rock concerts. I actually think that the principal reason for this had to do with the lack of on-campus parking (at UC Berkeley, only Nobel Prize Winners are guaranteed parking--true fact). The campus itself, along with the surrounding neighborhood, was pretty rock and roll friendly, but a large event would create a serious parking issue South and West of campus. The campus community accepted that a certain number of home basketball games would create a parking problem, but I doubt they were anxious to compound the issue with additional events.

Over the years, the Cal Bears periodically played games at Oakland Coliseum Arena, about 5 miles South, as it had over twice the capacity and better parking. In fact, when Harmon Gym was renovated from 1997 to 1999 (it is now called Haas Pavilion), the Bears played their home games at the Coliseum and Kaiser Convention Center in Oakland, both long-time Grateful Dead strongholds. However, since the Grateful Dead were emeritus by 1997, I don't consider the band as having played Cal's "home" arenas when they played those venues. Of course, since this post has no point, it wouldn't be hard to assert the opposite. 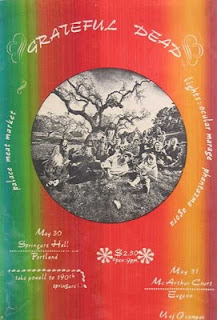 The Grateful Dead were always immensely popular in Oregon, whether due to mystical connections through Ken Kesey and their road crew (three of whom were from the tiny town of Hermiston, OR) or just because Oregon liked the Dead. In any case, when the Dead headlined McArthur Court on May 31, 1969, it was one of the biggest rooms that they had headlined up until that time. The show appears to have been scheduled for the track stadium (Hayward Field) and moved indoors, but in any case it was a sign of the Dead's status in Oregon.

The January 22, 1978 show at McArthur achieved legendary status due to the "Close Encounters" jam, another in a long line of sensational shows in Oregon. After the 1981 show, the Dead were so big in Eugene that they started playing the football stadium. Given the relative lack of population in Oregon compared to, say, New Jersey, the fact that the Dead were playing the football stadium was a remarkable indicator of Oregon's enthusiasm for the band.

The Dead regularly played in Portland and Eugene, and as a result they only played once in Corvallis. Corvallis was not so far from Eugene or Portland, so Beaver fans were not excluded, but Corvallis was the Engineering and Ag school, and had less of a hippie vibe than Eugene. Both times that the Dead played Gill Coliseum, it was probably too big a room for them to fill, but the fact that they were booked there at all was yet another indicator of their popularity in Oregon.

If I had been able to draw a plausible connection to the Grateful Dead's touring history and Pac-8 Basketball, it would have centered around Pauley Pavilion. Both the Dead and Pauley got their starts in the Fall of 1965, and an Acid Test was even scheduled for the Pavilion in March 1966, although it was moved elsewhere at the last minute [update: scholar Douglas reports that the Acid Test was not actually scheduled for Pauley, but rather the Grand Ballroom of the Student Union, across the street. In any case, it was canceled and moved]. Both the Dead and UCLA went from strength to strength in the late 1960s, and in my opinion at least the Dead peaked from 1972 to '74, just like UCLA. The Dead's first show there in November 1971 was still a bit large for the band, but the November 17, 1973 show was one for the ages. I have been told that the band soundchecked "Dark Star" at Pauley on December 30, 1978, as a prelude to the closing of Winterland, but I have never heard the tape.

Bill Walton, one of the biggest Deadheads ever, and certainly the best defensive Deadhead ever, was the anchor of the 1972-74 UCLA team. When I was a freshman at Berkeley in 1975, Southern California Deadheads explained to me that the first thing they did at a general admission show was spot Walton. This wasn't hard, as he was a 7-foot plus redhead (you would never mistake him for Swen Nater). Then, like every player in the Pac-8 or the NBA, they had to decide where they wanted to be in relation to Walton. Believe it or not, a school of thought held that being close to Walton was prudent because you could get behind him for some clear air to breathe (no one could see over him, so there was always empty space behind him).  However, by the time the Dead returned to performing in 1976, Walton was a regular backstage and such strategies were moot.

The anchors of the 72-74 UCLA teams were Bill Walton and Keith (Jamaal) Wilkes. Walton went from Pauley to Portland Memorial Coliseum, another Grateful Dead stronghold, and would lead the Trailblazers to a 1977 title. If I were Thomas Pynchon, I could draw a V from Pauley to Portland to the Oakland Coliseum, where Jamaal Wilkes helped lead the Warriors to their only title in 1975 at the Oakland Coliseum. The Walton connection to the Dead circled back to the Coliseum like a V2 rocket, as Chris Mullin, Sarunas Marciolunis and the Dead supported the Lithuanian Olympic Basketball Team, but I simply lack the analytical or literary skills to do more than allude to the connections.

The Grateful Dead only played one show at Maples Pavilion, but what a show it was. It was the debut of certain parts of the future "Wall Of Sound," and while the band complained from the stage about their various sound problems, I was there and it sure sounded good to me. Since it was my second Dead show, I took it for granted that I did not recognize most of the songs. Only much later did I discover that this was the ne'er to be repeated "Night Of Seven Breakouts," when the band debuted 7 new songs on the same night.

With no seats on the basketball court, when the band got to rocking the entire floor would bounce because everyone was jumping up and down. The extra springiness had the surprise effect of bouncing Keith's grand piano up and down. If his playing on "I Know You Rider" sounds a bit basic to you, I can assure you that it was because the entire instrument was moving in front of him, as was his piano bench, and he was just trying to keep his hands on it.

As a footnote, Stanford's mascot was the rather embarrassing "Indians." In the early '70s, the administration took steps to change the name. Rather than take the preferred student choice of "Robber Barons," recalling founder Leland Stanford's history as a railroad magnate--can you imagine how much merch the Stanford Robber Barons would have sold behind Andrew Luck?--the school chose the bland "Cardinal" as a nod to the team colors of red and white.

The Grateful Dead were extremely popular in Seattle from the very beginning, but not that many concerts have been held in Edmundson Pavilion over the years. The Dead's 1974 appearance seems to have been one of the few shows at the venue.

The Los Angeles Sports Arena was simply too large for the Grateful Dead for most of their career. Also, its location near the USC campus was not hippie central, and was not a likely candidate for the traveling circus of Deadheads. It is thus ironic that of all the Pac-10 arenas, the Grateful Dead ended up playing the Sports Arena more than any other. This realization undermined any vast metaphor I was going to draw about the supposed interaction between the Grateful Dead and college sports.

Arizona State University-Arizona State Sun Devils
Activity Center (634 E. Veterans Way, Tempe, AZ)
October 6, 1977
It may seem that the Grateful Dead played the home court of a Pac-10 team when they played the Activity Center on October 6, 1977. I was surprised to find out, however, that according to my own criteria, that was not the case. The ASU Sun Devils were in the Western Athletic Conference at this time. ASU and U. of Arizona joined the Pac-8 in 1978, making it the Pac-10.

The Activity Center was constructed in 1974, and has a basketball capacity of 10,700. It is now called the Wells Fargo Arena.

Courts Never Played
University Of Arizona-Arizona Wildcats (McKale Center, Tucson, AZ)
Washington State University-Washington State Cougars (Beasley Coliseum, Pullman, WA)
The Grateful Dead played the Phoenix area many times, but never the basketball arena. Washington State, meanwhile, is the most rural of Pac-10 campuses, so it is the one region where the Dead never played at all (the nearest they got was Spokane, WA, 75 miles to the North).

University of Colorado-Colorado Buffaloes
Events Center (Kittredge Road Loop, Boulder, CO)
December 9, 1981
Since CU will not join the newly-named Pac-12 until next year, the Dead's performance at the Activity Center on December 9, 1981 falls into the same category as the Oct 6 '77 show at ASU. Fortunately, however, this post doesn't really have a point, so I can include the information I found anyway.