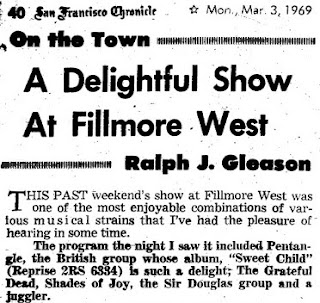 The Grateful Dead's four night stand at The Fillmore West from Thursday February 27 through Sunday March 2, 1969 stands as one of the premier events in Grateful Dead history. For once, The Dead played at their creative best when state-of-the-art recording equipment was hooked up and rolling, and we have been savoring the results ever since. The weekend stand was the heart of the seminal 1969 Live/Dead album, and the entire run was released this century as Fillmore West 1969. The Dead capitalized on the home court advantage and played some shows for the ages.

Fantastic as the Dead's performance was, however, the weekend had even more resonances. One of the opening acts, the English group Pentangle, had a profound effect on Jerry Garcia, which he commented on at various times. In a past blog post, I discussed how in the midst of playing some of the finest music of his career, Garcia found the time to listen to Pentangle's unique configuration and adopt it for his own approach to live acoustic music. Pentangle, their musical talents notwithstanding, had discovered the value of two amplified acoustic instruments supported by a tasteful rhythm section, and Garcia consciously adopted it as the approach to the acoustic Grateful Dead, as well as other ensembles, like the Garcia/Grisman band.

As if stunning live electric music and a transformational acoustic opening band weren't enough, a close look at Ralph Gleason's Chronicle review the Monday afterward reveals yet another amazing fact about the weekend. On one night, The Shades Of Joy, an additional opening act, featured future Legion Of Mary member Martin Fierro on saxophone and vocals, years before he would play with Garcia and Merl Saunders. Garcia very likely didn't even see the set, but it's yet another sign of what a portentous weekend it was that the local act opening the show included a player who would be a big part of Garcia's sound a few years later.

The Shades Of Joy
The Shades Of Joy were a familiar name on bills at rock clubs in the Bay Area from 1969-71, but I don't know much about them otherwise. They did release a self-titled album on Fontana Records in 1969. The band members on the album were
Fiero was from El Paso, TX, and in early 1969 he would have been relatively newly arrived in San Francisco. Around this time he had been working with the Texas musicians in the group Mother Earth, but I do not know if he was a regular member of that band. Fierro (1942-2008) apparently met Garcia while jamming with conga players in Golden Gate Park (per Blair Jackson's liner notes to the Legion Of Mary cd), but no date was given.

The only other name familiar to me in The Shades Of Joy was Jymm Young, who played keyboards with various Bay Area groups in the early 70s, including Boz Scaggs and Santana. Young was also known as Joachim Young, and his most heard contribution is the B3 organ work on the Steve Miller Band's "Fly Like An Eagle." I don't know where Young came from or how he ended up in San Francisco in 1969 in the Shades Of Joy.

Fillmore West 1969 Configuration
Although the Fillmore West typically advertised three acts in 1969, they often had four acts on Friday and Saturday nights. While the three acts "on the poster" would do three rotating sets (with the headliner playing, essentially, 3rd and 6th), on weekend nights an additional act would play a single opening set. This served to extend the show, encouraging people to come early and buy more popcorn and soda.  Many of the openers were discovered at the Tuesday night Fillmore West "auditions." The mostly forgotten practice of adding a fourth act accounts for the numerous bands who describe opening shows at the Fillmore West whose names never appeared on a poster.

Given that Gleason's review was published on a Monday (March 3), I think he was reviewing the Friday, February 28 show, because there was an additional act. An eyewitness to the March 1 show reported that Frumious Bandersnatch had replaced the Sir Douglas Quintet, so I think the review was more likely of the Friday show than the Thursday one (Feb 27). update: A Commenter makes a good case for Gleason having seen the first set of Thursday, February 27 rather than Friday.

Gleason's review of every act for the evening is quite enthusiastic. About the Shades Of Joy, he says


Shades Of Joy is a local group (a spin-off of several other local units) which features wild free form modern jazz saxophone playing by Martin Fierro, a roaring R&B rhythm section and two voices, Martin and Millie Foster, who is much better in this role than as a pure jazz singer. It's an exciting and interesting group.

Sir Douglas is really delightful. He got everybody dancing for for once (just as Pentangle had all the musicians listening) doing his standards "Mendocino" and "She's About A Mover" and merging his regular group with some members of Shades Of Joy.

It is rather a wild experience to see a group featuring a saxophone soloist who looks like the leader of a Third World Student picket line accompanied by a drummer who looks like he just got in from the cattle drive. Is there still hope?

It's interesting to see that Gleason noticed that all the musicians were paying attention to Pentangle. Elsewhere in the review, Gleason says "when [the acoustic guitars] are heard over the loudspeakers, there is no distortion, just a huge guitar sound," articulating what I believe to be the sound that captured Garcia's attention. For the Shades Of Joy, who probably came on at 7:00pm or so, it is Fierro that captured Gleason's attention. Fierro and others appear to have joined Doug Sahm on stage, prefiguring how he would join Sahm's band within a few years, and indeed share the stage with the Grateful Dead on some September 1973 shows when Sahm opened for the Dead.

Those who saw the Friday night show were probably so overwhelmed by the Dead (not to mention Pentangle) that they probably forgot Shades Of Joy earlier in the evening. Some of those people must have seen a Garcia/Saunders show a few years later, when Fierro was a member of the band--I wonder if they remembered then, or if there memories were permanently deleted?

Some Doug Sahm Apocrypha
Doug Sahm was a brilliant musician and a character-and-a-half, but he could be exasperating. Our eyewitness to the Saturday March 1 show reported that Doug Sahm was announced as being "sick" and his place on the bill was taken by Lafayette's finest, the Frumious Bandersnatch. Perhaps. Elsewhere, however, Doug Sahm has claimed that he was once fired by Bill Graham for bringing a 13-piece band onstage without asking. Sahm was a great teller of tales, so there's no telling how much of that story was true, and since Sahm (who died in 1999) is no longer with us, it's hard to know for sure what he may have been referring to.

Nonetheless, I can't help but connect the dots here. It appears that Sahm opened at least one night, and probably two, but was not present on the Saturday night. We also know from Gleason's review that several members of the Shades Of Joy were onstage with him. Perhaps inviting the extra musicians on stage disrupted some protocol, and Graham pushed Sahm off the bill? Its entirely possible. Given the number of amazing things that happened at the Fillmore West this weekend, perhaps this obscure bit of Sahm storytelling was part of the saga as well.

Appendix: Gleason On The Dead
By request, here are Ralph Gleason's comments on the Dead's performance: 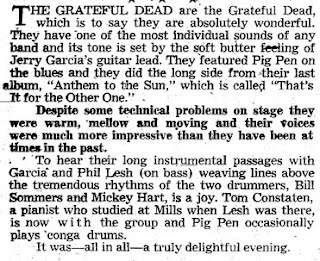