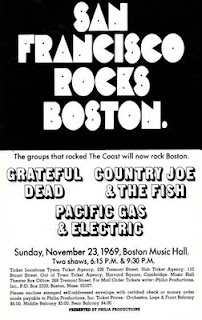 (A handbill advertising two shows at The Boston Music Hall on Sunday, November 23, 1969, featuring The Grateful Dead, Country Joe and The Fish and Pacific Gas & Electric. The show was probably canceled)

Periodically the Universe brings forth strange artifacts for our contemplation. A recent auction for a handbill for this hitherto unknown handbill for two Grateful Dead concerts at the Boston Music Hall on November 23, 1969 raises a host of questions. The most important question is whether the shows took place at all. My assessment is that they did not, which is why the handbill is so rare--it's an advertisement for a show which was ultimately canceled. However, while I would love to be proved wrong and discover that the shows did actually occur, the fact that the shows were ever planned at all sheds some interesting light on the Dead's late November 1969 plans.

The Handbill
The handbill advertises two shows at The Boston Music Hall on Sunday, November 23, 1969, featuring The Grateful Dead, Country Joe and The Fish and Pacific Gas & Electric. The ad says "The groups that rocked The Coast will now rock Boston." Both the Dead and Country Joe and The Fish had played Boston numerous times and would have been very popular. Both also had current albums, and the just-released Live/Dead was probably getting heavy play on WBCN-fm, Boston's leading rock station. Pacific Gas & Electric was a Los Angeles band, with a new album on Columbia.

The handbill advertises two shows, at 6:15 pm and 9:30 pm. With three bands, even a short set by the opening act would insure that both the Dead and CJF would play about 45 minute sets. Outside of hippie enclaves like the Fillmores, shorter performances were common, even for San Francisco bands.

The venue is now known as the Citi Performing Arts Center.

The Planned Concert
The Boston Music Hall was a reserved seat show, and a close look at the handbill shows that seat prices ranged from four to six dollars. Six dollars was a lot for a rock show in the 60s, even with the guarantee of good seats. Two shows of 3600 plus at high prices was a substantial booking indeed. While rock shows at the Boston Music Hall in the 60s were not typical, they were not unheard of. Just a few weeks after this scheduled show, Janis Joplin and The Butterfield Blues Band played the Boston Music Hall. Janis and Butter played on Thursday, December 11, another sign that weekends were typically reserved. I would note that Janis was a huge rock star in 1969, and Butterfield wasn't small, so it gives some idea of the scale of the intended rock concert. Two shows on a Sunday night in Boston was intended as a major booking, well worth flying out for.

In late 1969, Country Joe and The Fish were as big or bigger than the Grateful Dead. Their first two Vanguard albums (Electric Music For The Mind And Body and I-Feel-Like-I'm-Fixin'-To-Die) had been huge hits on the underground and in the early days of FM radio. Country Joe and The Fish were front and center at every anti-war protest and political rally, and that endeared them to many people who found it attractive that a band they really liked shared their political views. The group's fourth and current album, Here We Are Again, had not had the impact of the first two, but it was still a good record. The band had undergone numerous changes (see here for a better picture of the dizzyingly complex story of Country Joe And The Fish), but Joe McDonald and Barry Melton still lead the group and were as engaging performers as ever.

The Grateful Dead had been famous, or infamous, since well before they released an album. However, that had not translated much into record sales. Their first three albums had found their adherents, but only those lucky enough to see the band had really been drawn to them. This was starting to change with the release of Live/Dead, giving every FM radio listener in the country a taste of what they had been missing. The album had just been released in November 1969 (60s release dates are murky), so in an odd way the Dead's popularity as a band was just starting to catch up with their fame. Since both the Dead and CJF were longstanding San Francisco legends, it made sense to pair them up. 7200 plus tickets was a lot of tickets, particularly at high prices, so two headliners would be needed to make it happen. Note that neither band's name is higher than the other on the handbill. The bands probably didn't care, but I'm sure their booking agents did.

I don't know why there was a third band on the bill, but I think Pacific Gas & Electric may have touring with Country Joe and The Fish, so they needed to be booked as well.

We can be confident that the Friday, November 21 event occurred. It was mentioned in the SF Chronicle, and a tape endures. The Family Dog appearance by the New Riders Of The Purple Sage was recently discovered, but I had wondered why the Dead did not play anywhere on a Saturday night (November 22), after they had saddled up the horse the night before.

Country Joe And The Fish Touring Schedule
Country Joe And The Fish's touring schedule for November 1969 was murky, but there were definitely booked shows throughout the country. They had played Cal Expo themselves on November 15, and they had booked a show in Kansas City on November 29, followed by an appearance at a rock festival in Palm Beach, Florida. So national touring was at least contemplated for that week, whether or not it actually happened.

Summary
Pending further evidence, here are some propositions for what may have happened. I have no more evidence than I have presented here, and that ain't much, so any other suggestions or long-ago memories from Bostonites are very welcome.

Hypothesis #1
The show was booked, and both the Dead and Country Joe and The Fish planned to fly East and play other shows during the weekend, not necessarily together. However, the Boston show fell through due to poor advance ticket sales, and any shows surrounding the Sunday night show were canceled.

Two big shows in Boston would have been well worth flying out for. However, if the Dead were going to fly out for a Sunday night show, they would surely play a weekend show somewhere on the East Coast, albeit not too near Boston. Country Joe and The Fish would have done the same, albeit most likely in a different city, and the bands would have convened in Boston. However, once the Boston Music Hall dates fell through, the financial justification for flying East fell through as well, and wherever the Dead had planned to play that weekend fell through as well.

The cancellation left a hole in the Dead's touring schedule for the weekend of November 21-23. They seemed to have managed to hook onto the KZAP Birthday party in Sacramento, but weekend activities for Saturday, November 22 would already have been planned and the Dead could not find a paying show. The last-second booking of the New Riders at the Family Dog was a low risk, low reward event to keep the compulsive Garcia busy as much as anything.

Hypothesis #2
Here's an alternative proposition. The Grateful Dead were scheduled to play three nights at the relatively small Boston Tea Party on December 29, 30 and 31. This would have been a big event in Boston. The booking at the Boston Music Hall may have violated the contract with the Boston Tea Party, so the show at the Music Hall was canceled. Although Country Joe And The Fish were popular, they could not have carried two shows at Boston Music Hall by themselves, so they dropped out as well.

The net result for the Dead's touring schedule would have been the same, as it would have created an opportunity for the band to play Sacramento on Friday, November 21, but too late to find a Saturday night show.

If the Grateful Dead did play two shows at the Boston Music Hall on Sunday, November 23, it has escaped our notice until now. I find it extremely unlikely that there was no tape, review or ad of the show, and that the band just flew home the next day. But hey--it's my blog and I can hope.

Conclusion
I personally find Hypothesis #2 the most likely. The show was booked, and handbills were printed, though possibly never circulated, but the show was blocked by a conflict with the Boston Tea Party New Year's Eve event. Any interesting speculation or long-buried memories are more than welcome in the Comments.

Update
Better to be lucky than good. Hypothesis #3 seems to be the most likely answer, thanks to some excellent research from the Lone Star Dead Research Institute. Someone remembers it, and even has a ticket stub. So I guess NRPS didn't play Family Dog that night, and probably not the night before either (Nov 22).

Update 2
The show took place, but the Youngbloods replaced the Grateful Dead, per the Boston Globe. This confirms the report of an Anonymous commenter.