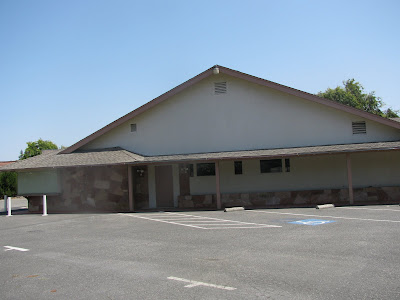 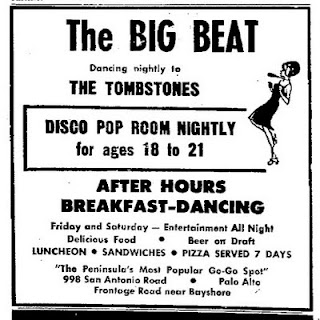 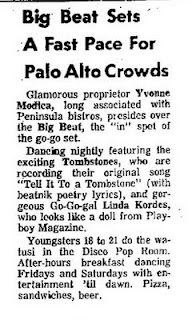 One of the principal events in the founding of the Grateful Dead was Ken Kesey's Acid Test at the Big Beat Club in Palo Alto on December 18, 1965. Tom Wolfe wrote about it in Electric Kool-Aid Acid Test, and among many other remarkable events it was where Owsley Stanley introduced manager Rock Scully to the Grateful Dead, and where Hugh Romney--known today as Wavy Gravy--first got on the bus, too. However, the location or even the nature of The Big Beat club remained shrouded in mystery. As a Palo Alto native, I found it odd that such a seminal location had gotten lost in the mists of time. A search of the regular sources (Dennis McNally, Rock Scully, etc) did not reveal the location, and indeed there were many contradictions. I have been in email contact with people who attended the event, and they themselves could not recall the exact location of The Big Beat.

Determined newspaper research finally revealed the location of The Big Beat (the article and ad above are from the June 24, 1966 edition of the San Mateo Times). I was even more startled to go to the actual site and discover that the building at 998 San Antonio Road, Palo Alto, pictured above in my photo (from August 7, 2009), apparently remains intact. While the well-kept building is now vacant, it still looks very much like the 1960s pizza parlor and dance club where the Dead played an acid test. As a result of my research, the history of The Big Beat and its peculiar relation to the Grateful Dead can now be clarified.

The Big Beat was the San Francisco Peninsula's first "rock" club, modeled somewhat on the style of venues like the Peppermint Twist in New York City. Owner Yvonne Modica, quite an interesting figure in her own right, had been a succesful restaurant and night club entrepreneur in the Bay Area since the 1950s. California liquor laws allowed restaurants to serve beer and wine, so by serving pizza the club could offer beer, without having to have a full liqour license. Another California anomaly allowed 18 year old adults in such establishments, although the drinking age was 21 (essentially to allow College Juniors to bring Freshman dates), and in any case the 25-and-under audience for The Big Beat was mostly a beer-drinking crowd anyway.

San Antonio Road was in the far Southeast corner of Palo Alto, quite far from Stanford University and the bohemian downtown scene that had spawned Jerry Garcia, Joan Baez and others. In fact the location of the club, in a then deserted industrial district near Highway 101, insured that most of the customers probably came from Mountain View, Los Altos and Sunnyvale as much as Palo Alto. The groups featured were local combos who played dance music, probably with a mixture of British Invasion, Surf and R&B (i.e. Motown) covers. The focus would have been on dancing and meeting members of the opposite sex, with beer and music for lubrication.

According to Yvonne Modica's obituary, one of the innovations of The Big Beat was a "breakfast show" from 2 to 6 am on Saturday and Sunday mornings, where no liquor was served. Apparently musicians would finish their other gigs, and come to jam and hang out until the early hours. Breakfast shows were a regular feature of Jazz clubs in San Francisco and later there were a number of rock or soul breakfast shows around the Bay Area, including at Winchester Cathedral in Redwood City, Frenchy's in Hayward or Modica's other club, The Trip in San Mateo, which opened later in 1966.

Ironically enough, The Big Beat's lasting fame came the weekend before it opened, when Ken Kesey's crew rented the place for a party, and The Grateful Dead played at The Acid Test. Hard as it may seem to grasp today, LSD was perfectly legal, and people drank electrified kool-aid and raved the night away. The cops did not like Kesey's Pranksters, and when they found out about an event they hovered around, hoping to bust people for pot (then a serious felony), but LSD use was legal and open.

Interestingly, someone who attended recalls two stages on opposite sides of the building (a common arrangement, making it easy to switch over to a new band) and an all-girl band who alternated with the Dead. The identity of this girl group remains a mystery, and my eyewitness readily concedes that his memory may be faulty and he simply could have imagined the other group. Anyone with foggy memories or insights about the identities of this all-woman should contact me or post in the comments (and to answer the first question, the Ace Of Cups, the legendary all-female psychedelic band, had not formed yet).

Since December 18 was a Saturday, presumably The Big Beat opened on Monday (Dec 20) or Tuesday (Dec 21). I know the club was open at least until Spring 1968, as I have seen a poster (advertising Charlie Musselwhite on March 24, 1968). Until Tom Wolfe published Electric Kool Aid Acid Test, the Big Beat Acid Test was known only to those who were there and a few other friends. However, although The Big Beat continued to exist, it dropped completely off the psychedelic radar.

According to one of the members of the downtown proto-hippie crowd, a club like The Big Beat was not only far from downtown--meaning you had to have a car to get there--but the beer drinking, go-go dancing scene was for twenty-somethings who worked at Lockheed, not budding artists who wanted to drop out of society. As a result, while The Big Beat seems to have been a popular enough establishment in 1966-67, people who went to The Big Beat didn't go to the Fillmore, and people who went to The Fillmore didn' t want to see anyone who played at The Big Beat.

The Big Beat seems to have closed around mid-1968, and its sister club, The Trip, in San Mateo (at 4301 El Camino) was open for about a year from mid-1966 to mid-1967. As Fillmore groups became more popular in the suburbs, going to a faux psychedelic nightclub to buy drinks became less appealing. The Big Beat receded into history, but the building remarkably remains intact.

Googling "Palo Alto" "The Big Beat" and other relevant terms will turn up a variety of incorrect locations for the club. The building that used to house the Keystone Palo Alto (a former supermarket at 260 South California) has been identified as the Big Beat, and a now demolished building on Homer Lane has been identified as the Big Beat also. I have gotten to the bottom of the story of the latter building, and there are reasons to confuse the Homer Lane building with The Big Beat, but that is the subject of another project. The actual Big Beat club remains intact in Southeast Palo Alto, a peculiar beacon to a distant past.

Crossposted at RockProsopography101.
Posted by Corry342 at 8:54 AM