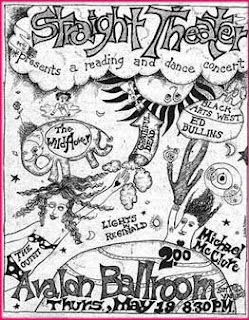 (a scan of the Straight Theater Benefit held at The Avalon Ballroom on May 19, 1966, featuring the Grateful Dead, The Wildflower and The Outfit. h/t Ross for the scan)

The Straight Theater, 1702 Haight Street, San Francisco
The Straight Theater was an old movie theater in the heart of the Haight Ashbury, at 1702 Haight on the corner of Haight and Cole (another entrance seems to have had the address of 1748 Haight). In early 1966, some local hippies decided to convert the old theater into a hippie arts center that would present musical and other performances as well as act as a sort of Hip Community Center. The complete story of The Straight on The Haight is quite interesting and detailed, and is best told on founder Reggie Wiliams's site, but for narrative purposes I will provide a brief summary here.

The old theater required a lot of work inside, and also required a lot of work to achieve the necessary Permits to present live shows. However, the theater immediately became a clubhouse of sorts, and was initially the rehearsal hall for a group called The Outfit. At some point in 1967, the theater also became a rehearsal hall for the Grateful Dead. It is very hard to pin down Dead rehearsal hall dates (there being few obvious anchors like posters or reviews), but I believe it was in between the band's time at the Sausalito Heliport but before the Potrero Theater.

The Straight was an important Community cause in the Haight. A benefit featuring the Grateful Dead and The Wildflower was held at the Avalon on May 19, 1966 (the poster is up top) to raise funds, and another was held there on March 5, 1967 (featuring Country Joe and The Fish, Big Brother, Moby Grape and The Sparrow). Its interesting to see that Chet Helms allowed the Avalon to be used to raise funds for a potential competitor, but such was San Francisco at the time. Most people forget that the Fillmore and Avalon were about 3 miles from the Haight, and many if not most hippies did not have direct access to cars. Thus many hippies saw the two main ballrooms as venues largely directed at the suburbs (rightly or wrongly), and the Straight seemed to seemed to solve that problem.

By June 1967, the physical work on the Straight Theater was complete, and only a Dance Permit was required to pave the way for the opening of the new venue. Dance Permits were a strange holdover from the Prohibition Era, in which the San Francisco got to determine which establishments could allow dancing. This made mid-60s San Francisco a sort of alternative universe Footloose-By-The-Bay, where dancing was mostly illegal but LSD was not. The struggles over a Dance Permit were a significant problem for the Straight, but that is a lengthy (if fascinating) story for another time.

The Straight Theater Christening, Thursday, June 15, 1967
The "Straight Theater Christening" was a private event--thus not requiring a Permit--to celebrate the opening of the Straight. In fact, the Straight would not open for over a month (July 22, 1967) and various Permit related problems continued to interfere, but that would have lain in the future. The two acts performing at the event were Oakland's Wildflower and a neighborhood band, the Grateful Dead (it was that kind of neighborhood).

The night of June 15, 1967 was particularly momentous. The hugely anticipated Monterey Pop Festival would begin on the next evening (Friday June 16), in which numerous local San Francisco underground bands, most without even records, would share the stage with major acts from Los Angeles, New York and London. The Who were playing the Fillmore of June 16 and 17, and heading down to Monterey for their Sunday (June 18) show. Most of the famous Haight Ashbury bands still lived in the Haight, for the most part, so the Straight Theater Christening was apparently the coolest of the cool parties, and in some ways the last night before Monterey Pop irrevocably expanded the San Francisco scene beyond the City's borders.

I have never doubted that the Grateful Dead were expected to be the featured attraction at the Straight Theater Christening, nor have I doubted that the band members were in attendance. However, most of the references to the party have usually been second or third hand, and the few who have recalled attending it seem somewhat foggy (ahem). The Dead were just getting back from their first Eastern tour, and had a Southern California show on Friday night (June 16), so there were some logistics involved. There could have been--may have been--a rolling jam session in which Dead members participated, but that was no guarantee of a Dead concert.


In this unique instance, the Grateful Dead lived in the neighborhood, and many if not most of the party guests knew the band members personally. Thus someone who may have recalled chatting with Phil Lesh and vaguely recall Jerry Garcia on stage would not have been focused on whether the Dead per se actually performed, as the Straight Theater Christening was more like a block party than a concert.

However, Ross spoke to Stephen Ehret of the Wildflower, and Ehret recalls the Dead's performance, so that puts the show into the confirmed cateogory. As to what they may have played, or how long, or any other details, no one may ever know, but at least we know for sure about the best neighborhood block party we wish we attended.
Posted by Corry342 at 8:50 PM