Ross unearthed a clip from the Berkeley Barb that sheds some light on a hitherto very obscure event. A tape endures of the Grateful Dead at UC Berkeley's Pauley Ballroom from June 21, 1970, but other than the vague assertion that it was an "American Indian Benefit," I knew nothing about it. The tape is quite short, about an hour, and Deadlists speculates that the show may be longer. However, given the reality of the concert, it now seems that the tape is probably complete save for a song or two. The listing for the show would be

The Barb clipping has a picture of a guitar player, and the caption suggests that it is Jerry Garcia. Although the photo is grainy, it doesn't look like Jerry to me. Any ideas on who it might be? Harvey Mandel, maybe? The photo caption says


JERRY GARCIA and The Grateful Dead will join half a dozen other bands and performing groups in a benefit this Sunday (June 21) at 8:30 pm for the Legal Defense Fund of the Pit River Indians who are fighting to regain their lands in the Shasta area and have been arrested trying to reclaim camp grounds now being trespassed upon by P, G & E. The contribute-what-you-can benefit sponsored by The Hog Farm and Native American Studies will be held at UC Berkeley's Pauley Ballroom. Groups lined up each day (and more are coming in each day) include The Dead, the New Riders of The Purple Sage, Osceola, The Hog Farm, Sandy Bull, Indian Pudding And Pipe and Fananang.


I'm trying to find out, if this show was opened by Sandy Bull, and The New Riders of the Purple Sage. someone was handing out lsd and doobies at the door. Wavy Gravy was the m.c. If it was, I was there, and sat and rapped with Jerry, outside, on the veranda. Please, help me here, as my memory is a little jaded, and dates are vague to me! Doctor R.O'C.

Doctor R.O'C surely attended this show, and its not surprising that Wavy Gravy was the MC, if "The Hog Farm" were listed as "performers." Wavy was probably the connection to the Grateful Dead, also. At this time, I don't think Wavy and the Dead were particularly connected, and this may have been one of their first of many collaborations. I'm sure that Hugh Romney (Wavy) and the band had met, but Garcia had said in the past that most of the benefits they did were because they met someone with whom they got along, rather than a devotion to specific causes. 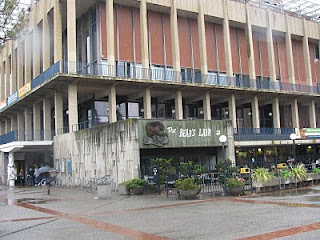 This photo from March 12, 2009 shows the ASUC Building at the back of Lower Sproul Plaza. Pauley Ballroom fills the rear (nearest to the camera) half of the second floor, with the 30-foot windows. The Bear's Lair coffee shop is in the basement. The ASUC Building was built in the mid-1960s, and its basic layout remains the same today as it was then. Pauley Ballroom is a 9000 square foot ballroom, used by the University of California for a variety of events (for internal pictures, see here; in a concert configuration, the shades would be drawn, and I'm not certain where the stage had been located). The university rates it as a capacity of 999, so probably a few more than that could be squeezed in.

The Grateful Dead had played Pauley Ballroom once before, on December 2, 1966, sharing the stage with Country Joe and The Fish. However, both such groups had long since outgrown this relatively modest venue. I have not tried to do an exact analysis, but other than unadvertised "stealth' shows, such as at The Matrix or Great American Music Hall, the Pauley Ballroom was not only the smallest venue they had played in some time, but the Dead never played an advertised show at a venue this small ever again. Even if we can find an exception, the band was long past such modest venues. Wavy Gravy must have given a heck of a pitch for the band to go for it.

I'm intrigued also by the phrase "contribute-what-you-can benefit." Did this mean people could get in for free if they wanted to? Wavy snuck a fastball past the University of California if that was the case. The co-sponsors of the event along with the Hog Farm was the Native American Studies department. A University organization would have been required to get access to the building, but the University would not want to sanction an almost-free concert by a Fillmore West headliner. My suspicion is that the concert was booked in advance, but the Dead were added relatively late, which would account for the tone of the caption in the ad.

The Concert
Whatever the caption may say, I'm inclined to believe Doctor R. O'C. and think that only the Grateful Dead, The New Riders of The Purple Sage and Sandy Bull performed. Its possible that Doctor R.O'C. arrived late and other acts had already played, but I don't think so. According to the caption, the benefit began at 8:30 pm, and a Sunday night Campus event had to end at 11:00 pm (I'm sure that's still true today). An opening set by Sandy Bull, followed by the New Riders and then an hour or so by the Dead would put the concert at around 2 1/2 hours.

There's an equipment issue as well. I can't even figure out how the Dead got their 1970 rig into Pauley Ballroom in the first place. However, Sandy Bull was a solo performer (albeit with multiple guitars and electronic effects) and the New Riders and the Dead would have used the same rig. Thus however difficult it was to muscle the Dead's equipment into Pauley, Sandy Bull could set up in front of it, play his set and then the Riders could step up, followed by the Dead. If there were a couple of other bands, I don't see how their equipment could have fit in, even if there was time.

For what its worth, Osceola was a familiar band at the Family Dog, although I know nothing else abut them,  and Indian Puddin and Pipe and Fanangang (usually spelled Phanangang) were from Seattle and Boston respectively, and were associated with former Moby Grape manager Matthew Katz.
Posted by Corry342 at 2:38 PM