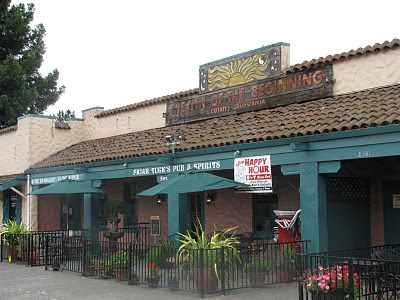 It is often a tricky enterprise attempting to photograph the sites of old venues. Addresses change, buildings are torn down or remodeled, roads and sight lines change, and what might be the site of an old venue may turn out to be misleading or mistaken. Not so with the Inn Of The Beginning in Cotati, California, where Jerry Garcia and The New Riders of The Purple Sage played at least four low-key shows in late 1969. Although the venue closed many years ago, the sign for the old club hangs proudly above the entrance, no doubt in the interest of aiding Rock Prosopographers everywhere.

The Inn Of The Beginning
Cotati was a sleepy, iconoclastic community that dated back to the 19th century, and a generally interesting place, for a rural area. As development expanded beyond Santa Rosa, the largest city in the County, Cotati was in danger of being annexed by Rohnert Park, a growing suburb of Santa Rosa. As a result, the town incorporated as a city in 1963 to control its own destiny.

As part of the dramatic expansion of state-funded education in California, Sonoma State College was founded in Santa Rosa in 1960 (taking the faculty, staff and facility of San Francisco State’s Santa Rosa Center, founded in 1956). However, by 1966 the entire Sonoma State campus had relocated to a new site in Rohnert Park. Calling the campus and the county “bucolic” does it a cruel injustice; year-round balmy weather and a beautiful setting made Sonoma State a desirable campus immediately. Eccentric Cotati, just next to Rohnert Park, immediately became the ‘college town’ associated with the Sonoma State campus.

The free-thinking history of Cotati made it a nice fit with the newly expanding Sonoma State campus. The Inn of The Beginning was founded in 1968 as a coffee shop and bar that provided both a  watering hole and a venue for local groups. The opening night band on September 28, 1968 was Bronze Hog, featuring guitarist Frank Hayhurst. Hayhurst, at one point, became co-operator of the Inn, and now owns a music store in Cotati.  The Bronze Hog played The Inn Of The Beginning in all its incarnations for decades, and the band still plays around the city periodically, and that sums up Cotati in a nutshell (for more on Cotati in the 1960s, see here).

Cotati’s friendly atmosphere and convenient location of The Inn made it an attractive place for the many world-class musicians who lived in Marin to use the Inn of The Beginning as a venue to work on new material or try out a new lineup. Over the decades, the likes of Van Morrison and Jerry Garcia played there many times, often with very little publicity. Ironically, this has led to an expansion of the legend beyond its actual width; the New Riders of The Purple Sage played there in 1969, but this has led to the unsustainable story that the Grateful Dead used to play there “every Tuesday.” Janis Joplin is reputed to have joined Big Brother there one night in 1970, and it is impossible to say whether she did for certain.

In 1969, however, after many major San Francisco rock luminaries had moved to Marin County, a show at the tiny Inn Of The Beginning in Cotati was an easy drive from both San Francisco and Marin. Thus the venue was an extra booking for working bands, and a chance for higher profile bands to play for a friendly audience without a lot of pressure. Jerry Garcia and his new band The New Riders of the Purple Sage took advantage of the Inn Of The Beginning to play 4 (or possibly 5) shows there:

September 18, 1969
A tape circulates from this Thursday night performance. It is unique in that Garcia shares the vocals with John Dawson, and he does not just la-la along on the background vocals. Since we have no other tapes until 1970, its impossible to say how typical this was(all clips are from Ralph Gleason's San Francisco Chronicle columns).

November 6, 1969
Yet another Thursday night. During this period, acts that played San Francisco clubs (like Elvin Bishop or Dan Hicks) mostly played weekends, so I presume local groups played on other nights. It seems that these discreet shows were effectively "extra" nights for the Inn Of The Beginning, when San Francisco club headliners weren't usually playing.

The New Riders were booked to play a show at The Inn Of The Beginning on March 12, 1970, another Thursday. After an exhaustive discussion on this blog, we decided that it was extremely unlikely that the group actually played the show. 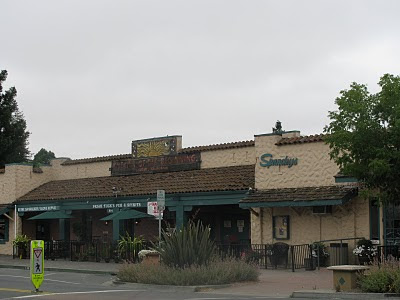 The Inn Of The Beginning may have had a slightly different configuration in 1969 than it does now. There is a bar "Spancky's" at one end, and a small leather repair shop at the opposite end, all at the same address of 8201 Old Redwood Highway. I suspect that the 60s era club extended throughout the whole building, but as you can see it is not a large place. Thus I find it unsupportable that the Grateful Dead proper ever played there, charming as the idea might be. I would find it plausible, however, that the "acoustic" Grateful Dead played a show there in 1970, as it would be a good place to try out new equipment or material. If such a show took place, it was probably on a weeknight around either April or July 1970, and there was probably no publicity.

Aftermath
The Inn Of The Beginning lasted through the mid-70s in its original incarnation. It re-opened in the early 80s under the name The Cotati Cabaret At The Inn Of The Beginning, when it merged with an establishment across the street. The Inn remained a venue at least into the 1990s, but I'm not certain when it turned into an Irish Pub. Cotati and Sonoma remains as beautiful as ever, although the wine business has made the price of property formidable indeed, in return for which it has made the County a destination for food and drink of all types.
Posted by Corry342 at 1:54 PM