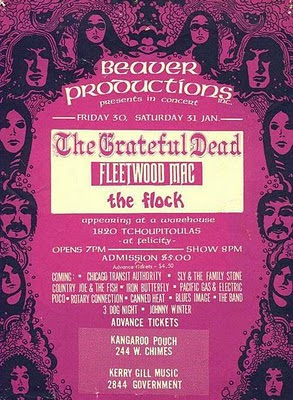 I have been constructing tour itineraries for the Grateful Dead for brief periods of their history. There is so much information circulating on websites and blogs (including my own) that go beyond published lists on Deadlists and Dead.net that these posts make useful forums for discussing what is known and missing during each period. So far I have reviewed
Rather than go in strictly chronological order, I am focusing on periods where recent research has been done by myself or others. Over time I hope to have the entire 1965-70 period. My principal focus here is on identifying which dates have Grateful Dead shows, which dates might have Grateful Dead shows, and which dates are in dispute or may be of interest. Where relevant, I am focusing on live appearances by other members--mostly Jerry Garcia, as a practical matter--in order to get an accurate timeline.

What follows is a list of known Grateful Dead performance dates for January 1970. I am focused on which performances occurred when, rather than the performances themselves. For known performances, I have assumed that they are easy to assess on Deadlists, The Archive and elsewhere, and have made little comment. As a point of comparison, I am comparing my list to Deadlists, but I realize that different databases may include or exclude different dates (I am not considering recording dates, interviews or Television and radio broadcast dates in this context).

My working assumption is that the Grateful Dead, while already a legendary rock band by 1968, were living hand to mouth and scrambling to find paying gigs. Even by 1970, most paying performances were on Friday and Saturday nights, so I am particularly interested  in Friday and Saturday nights where no Grateful Dead performances were scheduled or known.

In January 1970, the Grateful Dead were starting to reap the benefits of their great new album Live/Dead, released in November 1969, which was receiving plenty of airplay now that FM rock stations were all over the country. One interesting note about the month of January 1970 was the fact of only one scheduled show by the New Riders of The Purple Sage, and no guest live appearances by Jerry Garcia. Given the surprisingly numerous NRPS shows in November, I cannot think this was simply a coincidence. We have discussed possible reasons for the paucity of NRPS shows between December 1969 and April 1970 elsewhere, so I will not recap it except to say that it appears the Riders did not have a bass player.

I have linked to existing posters where available.

January 2-3, 1970 Fillmore East, New York, NY: Grateful Dead/Cold Blood/Lighthouse
The Grateful Dead finished their brief, if lengthy National tour with a weekend at the Fillmore East. They played early and late shows on both Friday and Saturday night, which was the standard arrangement there.

Cold Blood was booked by Bill Graham's Millard Agency, as were the Dead. Lighthouse were a Canadian group who played a sort of orchestral pop, similar in some ways to Blood, Sweat & Tears.

January 10, 1970 Golden Hall, Community Concourse, San Diego, CA: Grateful Dead/Sons Of Champlin/AUM
The Grateful Dead returned to the West Coast and played a Saturday night in San Diego. San Diego was not a big enough market for the Dead to play two nights, but it seems surprising they did not wedge a Friday night show (on Jan 9) somewhere in the Los Angeles area. Of course, the band had just been there the previous month, but they played a small venue in Hollywood (The Thelma, Dec 10-12) and one in distant San Bernardino (The Swing on Dec 13).

The San Diego Convention Center was at 202 C Street. A former San Diego resident explained it to me


San Diego Convention Center consisted of 2 concert venues:   Golden Hall and Exhibition Hall.  Only a lobby between the 2 rooms. Golden Hall had seats, auditorium style with a rise and a high roof. Exhibition Hall was a low roof, no seats, concrete floor affair.  Community Concourse was another earlier name for the entire building including both halls

The Sons Of Champlin actually substituted for Savoy Brown at the last minute. The Sons road manager recalled that the stage had an Vaudeville-style platform that could be raised and lowered. The Sons went on too long for the promoter's liking, and when they launched into another number--"Turn On Your Lovelight," amusingly enough--the promoter lowered the stage as a warning, and The Sons descended out of sight, rocking away. At this time, "Lovelight" was a popular nightclub cover version, and had been since Bobby "Blue" Bland had a great hit with it in 1961. Both the Dead and the Sons (and a thousand other groups) had been performing it live for some time.

January 15, 1970 [venue], Seattle, WA: Grateful Dead [unconfirmed]
Another blogger pointed out that Tom Constanten mentions the Dead playing the Aqua Theater in Seattle on January 15, 1970. While this is clearly a spurious venue--the Dead had played the final show at the Aqua Theater on August 21, 1969--I wouldn't discount the date. Constanten has clearly been using a diary or some other form of reference, and some of his most interesting dates fit very clearly into the Dead's touring schedule, even though they are unremarked elsewhere (for example, September 16, 1967 in Las Vegas).

Although January 15, 1970 was a Thursday, I would not at all rule out that there was at least a show scheduled in Seattle, even if it wasn't played. 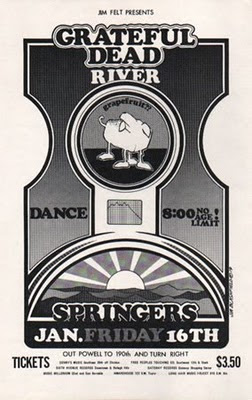 January 16, 1970 Springer's Ballroom, Gresham, OR: Grateful Dead/River
Springer's Ballroom was apparently the ballroom in an old resort. It was in suburban Gresham, about 15 miles East of downtown Portland. I have written about this venue at length elsewhere, to the extent that  that I could find out about it. The building was located on West Powell Boulevard (US 26) at SE 190th Avenue. There has been considerable development since then and no trace of the building appears to remain.

River was a Portland band.

January 17, 1970 Gill Coliseum, Oregon State University, Corvallis, OR: Grateful Dead
Gill Coliseum was the basketball arena for Oregon State. Built in 1949, the venue has a current capacity of 10, 400. I do not know what its capacity was in 1970, but even so it must have been one of the larger places that the Dead headlined in those days.

January 18, 1970 Springer's Ballroom, Gresham, OR: Grateful Dead
The Dead returned to Springer's two days after their previous appearance. Bob Weir's comment from the stage about the sparse crowd shows why the band didn't add casual dates more often. Gresham was in the suburbs, and underground word-of-mouth wasn't as effective as it might have been in Manhattan or San Francisco.

January 19, 1970 Pauley Ballroom, UC Berkeley, CA: New Riders Of The Purple Sage/Cleanliness and Godliness Skiffle Band Benefit For Center For Educational Change
Joe discovered this obscure show quite recently. There are many strange things about it, not least a Monday night show after the Dead had just returned from Portland. Nonetheless, it is the only booked New Riders show between November 1969 and March 1970, and if it was played it was the only one played between November and April 1970.

I asked Brian Voorheis of The Cleanliness and Godliness Skiffle Band if he recalled the show, and he didn't, but of course CGSB played Pauley many times, so that's hardly definitive either way. The bigger question about a January New Riders show remains who might the bass player have been, or is supposed to have been. It does appear that after steadily playing around through November, Phil Lesh simply lost interest. If there was a one-off show, perhaps there was a one-off lineup of the New Riders as well.

January 23-24, 1970 Civic Auditorium, Honolulu, HI: Grateful Dead/The Sun And The Moon/September Morn/Pilfredge Sump/Michael J Brody
Some lists include the Jefferson Airplane on the bill, but I am reliably informed that they were not part of the show. I don't think the Dead could really have filled two nights at the 8,800 capacity Honolulu Civic, but of course Hawaii was different than every other state for many obvious reasons, so its tough to generalize. I have seen a number of Hawaii bills from the 60s where there was a major headliner and a series of local bands.

January 30-31, 1970 The Warehouse, New Orleans, LA: Grateful Dead/Fleetwood Mac/The Flock
The Warehouse was a recently opened venue that created a Southeastern stop on the "Fillmore Circuit," which had hitherto been focused more on the I-80 route through Chicago and the Midwest. The Warehouse, at 1820 Tchopitoulas St. (at Felicity), was an old railroad storage warehouse, generally lacking in ventilation (in the Summer, ice trucks would be lined up next to the building, spraying cool air into the second story windows to be fanned out into the auditorium).

Fleetwood Mac had been pals with the Dead since early 1969. Much of the weekend is described in great detail from by Mac soundman Dinky Dawson in his fine book Life On The Road (Billboard Books, 1998, p. 121-124), although fortunately the Mac missed the notorious bust after the second show.  As if getting busted didn't make the weekend momentous enough, the Dead decided to fire Tom Constanten as well, and his last official show with the band turned out to have been January 24, although I believe he "sat in" (in a sense) on some numbers in New Orleans.

The Flock were an interesting band from Chicago that featured electric violinist Jerry Goodman. Goodman, a tremendous player, used his violin as the lead instrument in the horn section, an approach borrowed (consciously or not) from Texas Swing music but applied to a hard-driving "soul-rock" sound. Goodman later played in the first Mahavishnu Orchestra and a later lineup of Dixie Dregs.

February 1, 1970 The Warehouse, New Orleans, LA: Grateful Dead/Fleetwood Mac Bust Benefit
After the bust, the Dead are out of cash, a clear sign of the hand-to-mouth life of a touring band in those days. They add an extra show at The Warehouse on Sunday night. Fleetwood Mac agrees to play as well, as they do not have a show until February 5 in Boston (The Flock had to move on, according to Dawson). The show is well attended, thanks to the local FM station. Unlike suburban Portland, word travels fast in a City.

According to Dawson, although the New Orleans cops are out in force looking to bust pot smokers, buckets are passed around for people to drop money in to help the Dead, and in thanks the band passes around bottles of Cold Duck (a cheap champagne-like concoction). They announce from the stage "its Electric Duck, so only take a few sips," and the New Orleans police, used to 200 years of vice, somehow miss the reference. Peter Green, and probably other members of Fleetwood Mac, end up on stage during "Turn On Your Lovelight" (and who does that strange rap at the end?).

Since the Grateful Dead's next show was in St. Louis on Monday night (February 2), I have always wondered how they got the sound system 700 miles North in time for the show. My theory is that the equipment truck left New Orleans Sunday morning (February 1) and the Dead played on Fleetwood Mac's sound system. The Dead and the Mac were among the first two bands to tour with their own PAs, and Dinky Dawson and Owsley were good friends and professional peers. Expedience notwithstanding, the Dead would have known they could put on a quality show using the Mac's equipment. I'm assuming that the band members themselves were going to fly to St. Louis in any case, so their plans would not have changed.

Anyone with updates, corrections, insights or other valuable information should Comment or email me.
Posted by Corry342 at 7:23 PM