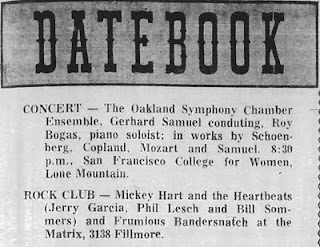 (a clipping from the San Francisco Chronicle Datebook section from Monday, February 24, 1969)

The performances of Mickey Hart and The Heartbeats (not sic) at The Matrix on February 24 and 26, 1969 are "known" because they have been listed on Deadlists and elsewhere for some years. Their listing is a result of being publicized in the San Francisco Chronicle, the primary source for research into 60s Grateful Dead performances in the Bay Area. With that being said, nothing else is known about these concerts. Since I have uncovered the actual listings, I thought I would post them and speculate a little about what they may or may not mean. In the event that some reader actually recalls these events or has some access to a recording, then we perhaps may learn something about the shows beyond mere speculation.

San Francisco Chronicle Datebook Conventions
Each day in the San Francisco Chronicle Entertainment section, there was a Datebook box (excerpted above) that listed events that were opening on that day. While one function of the box was to highlight events that were opening on that evening, it also provided a space of flexible size that could be modified based on how many column inches were filled by articles or ads. While the box favored major events or events that were promoted by Chronicle advertisers, it could be expanded as needed with press releases when an extra inch or two was needed. Although The Matrix was no longer a Chronicle advertiser by 1969, the paper would often list the club's bookings to fill space, as Matrix listings made for more interesting reading than most clubs. This was particularly true on days of the week where there wasn't much happening, such as Mondays.

The Matrix Datebook listing for Monday, February 24 (above) says
ROCK CLUB--Mickey Hart and The Heartbeats (Jerry Garcia, Phil Lesch and Bill Sommers) and Frumious Bandersnatch at the Matrix, 3138 Fillmore

Monday night was usually "jam night" at The Matrix, so it is not so far fetched that members of the Grateful Dead were apparently hosting some sort of relaxed jam session at the club. Although The Matrix wasn't a Chronicle advertiser, there wasn't much else happening that night, so it's not surprising the Chronicle listed the Matrix event. Where, however, did they get the name "Mickey Heart and The Heartbeats?"

The Chronicle, like all papers, got most of its material from press releases issued by the venues or promoters. Thus, the spelling of the listing must of come from The Matrix itself. Given the contrary spelling of "Heartbeats" (as opposed to "Hartbeats"), the misspelling of "Lesch" and the use of "Bill Sommers," it opens some odd papyrological questions that I will parse here.

Mickey Hart and The Heartbeats
When the group members agreed to this gig, they must have told the name to the Matrix booker. However, although the person seems to have known how Mickey Hart spelled his name, the band or their manager probably did not specify the spelling of "Heartbeats." It probably never occurred to anyone. It's worth noting that at the prior incarnation of this lineup, in October 1968, the "group" was billed as "Jerry Garcia and Friends" and the name "Mickey Hart And The Hartbeats" comes from some onstage banter by Garcia, and no one had thought twice about how the name should be spelled.

It does beg the question of why the band wanted to play a show without Weir, Pigpen and TC. In Fall '68, there had been some tension in the band, but it had clearly been resolved. However, it's important to remember that the Grateful Dead had a big weekend booked at Fillmore West in the coming weekend, and may not have been able to play under their own name. Certainly, Graham's standard contract would have prevented any "Grateful Dead" booking. It's possible, then, that the Matrix show was a full band performance, or close to it, and the booking was just a polite dodge to honor the Graham contract.

I think the band was recording Aoxomoxoa at this time, and I wonder what their motives were for having band members perform (in any configuration) prior to a Fillmore West gig, in the midst of recording session. One possibility is that the band simply wanted to perform in public prior to recording live. Given how well we know they played that weekend, if the full band played at The Matrix, they must have rattled the walls.

Phil Lesch
I'm sure this is just a misspelling, but it leads me to believe that someone at The Matrix took information over the phone.

Bill Sommers
Seeing Bill Kreutzmann's name listed as Bill Sommers is in many ways the most curious item. This can't be sloughed off to a misunderstood conversation, like the spelling of "Heartbeat" or "Lesch." When The Warlocks first started, Weir and Kreutzmann were too young to play in bars. Kreutzmann somehow obtained a draft card with the name "Bill Sommers," so some early Grateful Dead publicity lists Bill Sommers as the Grateful Dead's drummer. This peculiarity probably accounts for Kreutzmann being listed as "Bill The Drummer" on the first Grateful Dead album.

By 1969, however, Kreutzmann's name was known and he was over 21 years old. Why was he listed as "Bill Sommers?" Honestly, I think this was some kind of in-joke, but this pranksterish naming convention leads me to wonder what this booking was all about.

Adding to the confusion, in Ralph Gleason's Monday Chronicle Ad Lib column, he doesn't mention The Heartbeats playing The Matrix. Now, he didn't have any obligation to do so, and he probably wrote up the column on Sunday afternoon, so maybe he didn't have access to the press release announcing the performance at The Matrix on Monday. Still, note that Gleason does mention the upcoming Matrix bookings, saying "at The Matrix tomorrow night through Thursday: Frumious Bandersnatch," with no mention of the Wednesday Heartbeats show (Johnny Cash at Chico State sounds like it would have been fun, by the way).

Come Wednesday, however, Gleason mentions the Heartbeats show (above, from February 26, 1969). We can tell by the spelling that Gleason has access to the same press release, since "Sommers" and "Heartbeats" are giveaways. He has spelled "Lesh" correctly.

Until we get either eyewitnesses or tapes, we are left with a variety of fascinating unanswered questions:
Of course, I can add yet another strange twist to these shows. One of the most perpetually fascinating Garcia tapes is a 1969 tape with Garcia at The Matrix playing banjo with the bluegrass group High Country. The tape has it's own history which I won't detail, but it's excellent traditional bluegrass, featuring David Nelson on guitar (who was an "adjunct" member of High Country) and band founders Butch Waller and Rich Wilber.

Traditionally, the Matrix tape was dated February 19, 1969, but it has since been shown categorically that the Grateful Dead were playing the Fillmore West on Wednesday, February 19. This begs the question of what the actual date of the Garcia/High Country bluegrass show might be. The subject of dating Matrix tapes is a difficult subject in its own right, but in general, while every Matrix show was taped, nowhere near every recording was kept, due to expense. Tapes were constantly recorded over. The limited evidence suggests that dates on Matrix tapes were more like approximations, since an original tape label may have listed a show that was taped over in succeeding nights.

What is lost amidst these papyrological ramblings was the Grateful Dead would spend the weekend at the Fillmore West, playing epically memorable shows that would form the basis of the band's iconic Live/Dead, and all of which would be archivally released by the band in the next century. Even the Frumious Bandersnatch, who were either playing with the Dead at The Matrix, or on alternate nights (depending on how you read this), ended up replacing the Sir Douglas Quintet at the Fillmore West and opening some of the classic shows.
Posted by Corry342 at 8:17 PM