(a newspaper ad from late January 1980 for the Keystone family of clubs: Keystone Berkeley, Keystone Palo Alto and The Stone. Note that Jerry Garcia Band shows are listed as "Jerry Garcia")

In a recent post, I discussed at length Jerry Garcia's unique and lengthy professional relationship with the Keystone Berkeley. Over the course of 12 years (1972-84), Garcia played the club at University and Shattuck Avenues an amazing 206 times, in numerous different aggregations. Uniquely, Keystone Berkeley shows never had advance tickets, and often didn't sell out, so Garcia managed to retain one place where he was just another local player, even after he was a worldwide rock star.

The Keystone Berkeley was owned and managed by partners Freddie Herrera and Bobby Corona. Bobby Corona's son (Bobby Corona Jr.) was also an important part of the partnership. John Kahn had played regularly with Mike Bloomfield at the Keystone Korner, a San Francisco club founded by Herrera. I believe Kahn's connection to Herrera was instrumental in getting Garcia to switch his "home base" to the Keystone Korner in 1971, after The Matrix (his prior base) closed. However, Garcia's commitment to working with Herrera and his partners extended for another 16 years. It must have been no casual thing, and yet that relationship was never publicly discussed by Garcia, to my knowledge.

Not only was Garcia a mainstay of the Keystone Berkeley, but at various times the Herrera/Corona team operated 4 different clubs, and Garcia played steadily in all of them. On top of that, and more significantly, after 1972, when the Keystones had a club in a city, with few exceptions Garcia generally did not play other venues in or near that city. The Grateful Dead were a separate business entity from the Jerry Garcia Band, and that restriction did not apply to the Dead, and there were occasional exceptions for Garcia, but most of those exceptions involved benefits rather than competing clubs. The particular significance of Garcia's loyalty is that his commitment to Herrera and the Coronas meant that he generally did not play for Bill Graham in cities where there was a Keystone. Bill Graham Presents was the dominant promoter in the Bay Area, and Graham and Garcia were personal friends, but Garcia's pattern of performances demonstrates an unmistakable commitment to Graham's competitors.

Let me say at the outset of this analysis that I am not suggesting some secret animosity between Graham and Garcia, or shadowy dealings with the Keystone owners. However, while Bill Graham is rightly revered as a key figure in San Francisco rock, and his business relationship to the Grateful Dead was an essential part of their story, the Jerry Garcia Band and Garcia's associated ventures were a distinct entity. Garcia and his manager Richard Loren obviously found a comfortable niche in their original setup with the Keystone Berkeley, and seemed to have felt it served their ends better. This, too, seems to have been a business decision, but at the very least it shows that Garcia's relationship with Bill Graham was considerably more nuanced than it may have appeared from the outside.

Overview of Garcia Keystone Performances
The breadth of Garcia's relationship to the Keystones can be seen by the number of performances he made for them (note: I have not reconciled these counts with disputed shows, etc, and your own exact count may vary).

Keystone Berkeley, 2119 University, Berkeley
First and Last Garcia Shows: March 8, 1972 (Garcia-Saunders)>March 22, 1984 (JGB)
Total Garcia Performances: 206
Bands: Garcia-Saunders,  Old And In The Way, Great American String Band, Legion Of Mary, Jerry Garcia Band, Reconstruction
Other Dead spinoffs who played there: Kingfish (70s), Keith and Donna, Toulousse To Truck, Robert Hunter and Comfort, Bob Weir Band, Robert Hunter, Bobby And The Midnites, Healy-Treece Band, High Noon, Bill Kreutzmann's All-Stars
Note 1: Garcia-Saunders played 4 shows at the venue in June, 1971 (Jun4>June 27) when it was still called The New Monk. The shows were probably booked by Freddie Herrera, who bought the club a few months later.
Note 2: There was a Keith and Donna show at Keystone Berkeley on August 18, 1975 that may have featured Garcia, which I have not counted in the totals. 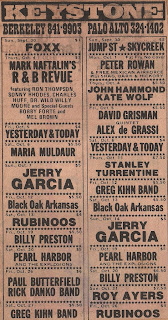 (a scan of the newspaper ad for the Keystone Berkeley and Keystone Palo Alto, just before The Stone opened. Note the wide variety of acts at the two clubs)

It's revealing to compare these numbers to the only comparable Garcia venue, The Warfield. The Warfield, at 982 Market Street in San Francisco, had originally been called The Fox-Warfield when Bill Graham started putting on shows there in 1979. The Grateful Dead had a famous 15-night stand there in September and October 1980. At the time, the Fox-Warfield was a restored theater from the 1930s, with 2,200 reserved seats on a main floor and a balcony. The Warfield was in a very seedy part of the City, however, and the rock market expanded beyond such a small place. After a 1983 Rex Benefit, the Dead were simply too large for the room.

The Jerry Garcia Band did play a show at the Fox-Warfield, on June 26, 1981, and that event is worthy of a post in itself. The show was sold out, or close to it, and it was a regular Bill Graham show, so it demonstrated that the Jerry Garcia Band could have done a lucrative business with BGP had he so chosen. While it's true that Garcia might have preferred the frequency of shows at the Keystone, the Warfield was only used on weekends, and not all of those, so he could have played as many dates at the Fox-Warfield as he wanted. In about 1982, BGP took over San Francisco's leading rock nightclub, The Old Waldorf--it, too, another story--and while Garcia played a couple of shows to inaugurate the takeover (Jan 11 & 13 '82), he promptly returned to The Stone.

The Jerry Garcia Band did not return to the Warfield until late 1987, after The Stone had closed (Garcia, Weir and Mickey Hart had played a benefit for Jane Dornacker at The Warfield on November 22, 1986). (update: I had this wrong. Herrera and the Coronas operated The Stone until 1989, but it seemed that the combined pressures of the Dead's expanding popularity and Jerry's iffy health, the permanent availability of the Warfield trumped The Stone). With the Keystone family closed for good, and the Grateful Dead bigger than ever, Garcia started to play regularly for Bill Graham, both in the Bay Area and around Northern California. Garcia played a few shows at the Warfield in the late 1980s, but once the 90s beckoned the remodeled and renamed Warfield became the new home base for the Jerry Garcia Band.

By my count, Jerry Garcia played 99 shows at The Warfield between 1981 and 1995. 90 of them were from 1990 onward. By 1990, the Warfield had changed significantly as a venue. At some point in the 1980s, Graham had lost the lease to a European group who wanted to open a Euro-style disco nightclub there. They sunk a significant amount of money into the club, which immediately bombed, and Graham took over the lease again, benefiting from their upgrades and re-naming the club "The Warfield" (as opposed to Fox-Warfield). Only complete trainspotters like me ever called it "The Fox Warfield" anyway.

The most significant difference between the 90s Warfield and the early 80s Fox Warfield was the main floor. The balcony still had comfortable reserved seats with nice sightlines, but the main floor had a dance floor near the stage and rows and rows of tables and barstools on raised platforms in the back. All of these changes were designed to insure that the Warfield made its money at the bar rather than exclusively on ticket sales. The tendency of Jerry Garcia Band fans to show up early, along with the tendency of Garcia to start late and take long breaks, all made for excellent bar receipts. Garcia and the Dead were huge by the 1990s, and they could hardly have played a club without causing a ruckus, so the Warfield was as small a place as they could manage. The economics of the Keystone were in play again, with a more relaxed setup that encouraged hanging out, in a still-seedy part of town where Deadheads actually improved the neighborhood.

Even so, Garcia's 99 shows at the Warfield is less than half of what he played at Keystone Berkeley, and a quarter of what he played for the Keystone family. Without trying to count every show, I would speculate that Garcia played 200-250 shows for Bill Graham Presents (including the Warfield), and he played 410 for the Keystone, so it's hard not draw the conclusion that Garcia's personal and business interests were well served by the Keystones. Based on the Jerrysite's total of 1624 shows, fully one quarter of Garcia's shows were at Keystone family clubs. Of course, the Dead played 400-500 shows for Bill Graham, but they were a separate business entity with separate needs and musical goals.

Jerry Garcia expended considerable effort to make sure that the Jerry Garcia Band was a thriving musical entity. The Grateful Dead were a full time obligation, and yet Garcia kept up a huge touring schedule with the Garcia Band, and other occasional side projects, year after year. A cursory analysis of these statistics suggests that the Garcia Band would not have been viable without a home base, initially the Keystone Berkeley, then the Keystone clubs as a whole, and ultimately the Warfield. Many musicians had spent years working the same clubs until they got famous, and Garcia bore the rare distinction of playing the same clubs after he became famous.

I would be surprised if there were another major rock star who had played the same venue 99 times after he was famous, and I feel confident that there were none who played the same venue 206 times after they no longer "had to." Art and Commerce are always in conflict and in cooperation, and Garcia's need for a home base in his own endeavors was crucial both for his financial well-being and his musical goals, and it remains a largely unexamined part of his legacy.
Posted by Corry342 at 8:44 PM