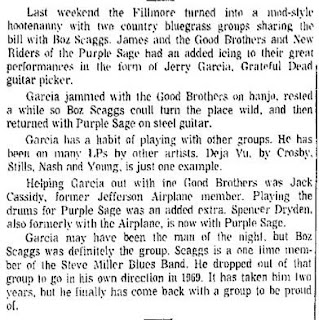 The New Riders of The Purple Sage, with Jerry Garcia on pedal steel guitar, headlined four nights at The Fillmore West (25,26,27,28 February 1971), supported by Boz Scaggs and James and The Good Brothers. The poster is well known and tapes of some of the Riders shows circulate widely.

However, Kathy Staka and George Mangrum’s weekly rock column in the Hayward Daily Review from March 4, 1971 (above) reveals that on one night at least, Garcia played banjo with James and The Good Brothers. I have inferred from the column that it was Saturday, but it could have been any night (and all nights, for that matter). Airplane/Hot Tuna bassist Jack Casady also seems to have played along with the trio, who generally featured two guitars and an autoharp as well as three-part harmonies.

James and The Good Brothers were a Canadian trio (James Ackroyd and twins Bruce and Brian Good). They made contact with the Dead on the infamous “Festival Express” train trip, and were invited to San Francisco. They recorded an album for Columbia (NRPS’s label), produced by Betty Cantor-Jackson, with Bill Kreutzmann on drums, and possibly an uncredited Jerry Garcia. A live KSAN broadcast of the trio (with no guests) from the Record Plant (Sep 5, 1971) circulates on Sugarmegs.org, personally a bit too folkie for me, but I do not know if it was representative or typical of their live show.
Posted by Corry342 at 11:54 AM