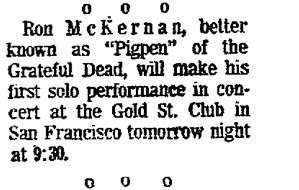 A remarkable listing in the September 8, 1971 Oakland Tribune says “Ron McKernan, better known as “Pigpen” of the Grateful Dead, will make his first solo performance in concert at in the Gold St. Club in San Francisco tomorrow night at 9:30.”

I wonder if this even happened, as I have never even heard a rumor about Pig playing solo. I wonder if there is even a rehearsal tape, even if he never played. I know nothing about the venue either.

Gold Street in San Francisco is in North Beach, near Jackson between Montgomery and Sansome.
Posted by Corry342 at 9:40 AM