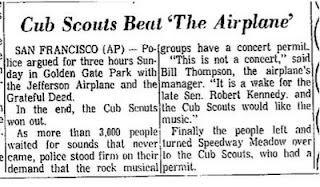 This brief article from the June 10, 1968 Hayward Daily Review describes an attempt by The Grateful Dead and The Jefferson Airplane to hold a free concert the previous day (Sunday June 9) at Speedway Meadows, in honor of Robert F. Kennedy. Kennedy had been assassinated in Los Angeles on the morning of June 6, 1968, and it was a shattering event for the nation.

However, it must also be conceded that the Dead and the Airplane liked to play for free, over the objections of the city of San Francisco, and may have relished the confrontation. The show could not have been formally publicized, since its lack of a permit notwithstanding, even by 1968 The Dead or The Airplane (much less both) would have flooded the park with people if a free concert had been announced. The Dead and The Airplane had been playing The Carousel, and the previous week the Dead had played the park somewhat unnanounced, to publicize their last show of their previous stand.

Nonetheless, at this distant remove it does present an interesting vignette: equipment on stage, the Dead and Airplane milling around, 3,000 eager rock fans, a bunch of Cub Scouts, and some cops.
Posted by Corry342 at 8:29 PM