In a prior post, I was very pleased to find the earliest known 1970 show by the New Riders of The Purple Sage, on March 12, at the tiny Inn Of The Beginning in Cotati. Since that was the day before  a pair of weekend shows at Berkeley's New Orleans House (March 13 and 14, 1970), I drew an elaborate conclusion that the New Riders were testing Dave Torbert as a bassist. I posited that he presumably passed, and that would have set the stage for the New Riders surfacing in late April.

That was yesterday. I am now rethinking the whole concept. Maybe the shows never took place at all, so my logical deductions about the New Riders bass player had a foundation in empty air. First, the new evidence, via Ross: 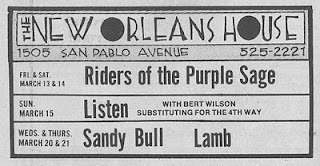 The weekly Berkeley Barb display ad for the New Orleans House (for the week of March 6-12, 1970) shows the New Riders as appearing on Friday and Saturday, as has been advertised for some time. 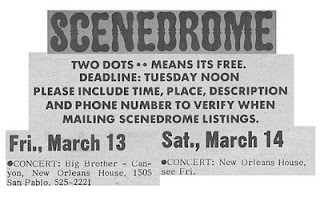 However, Ross also sent a clip from the Barb entertainment listings of the same week, and it shows Big Brother as appearing at the New Orleans House. Now, the display ads were often prepared some time in advance, not surprisingly, but the Scenedrome entertainment listings were much more current, often updated by phone. Its hard not to draw the conclusion that Big Brother seems to have replaced the New Riders at the Boarding House.

Whatever the story--and I'll speculate on that in a minute--Big Brother and The Grateful Dead had been good friends for many years, and David Nelson and Peter Albin were even better friends, so the substitution seems likely. During this period, Big Brother was getting back into performing without Janis Joplin, so headlining a small venue (or a large club, depending on your point of view) like The New Orleans House made business sense. Ross reminded me of another New Riders booking: 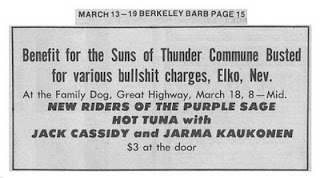 The next week's Barb (March 13-19, 1970) advertised a benefit at San Francisco's Family Dog On The Great Highway, featuring the New Riders of The Purple Sage and Hot Tuna. I had long dismissed this as a valid New Riders date, since the Grateful Dead were in Buffalo the night before (March 17), and it seemed unlikely that Garcia and Hart would fly back for a benefit. I have always presumed that Hot Tuna played the show, but that the New Riders did not.

However, the new evidence from Ross and the Comment thread on the March 12, 1970 post has led me to re-think my entire view of the evolution of the New Riders in Spring 1970. In contravention of everything I wrote yesterday, I am going to suggest that
I tend to be narrowly focused on live performance dates, but one of the themes of the Comment thread was the amount of stressful activity going on in the Grateful Dead universe in February and March 1970. To note some important highlights, for which my primary source is Dennis McNally (p. 360-363)
I believe the New Riders of The Purple Sage shows scheduled for March were booked in February, but they were never actually played. The Inn Of The Beginning did not have "headline" acts on weeknights, so the New Riders did not have to be "replaced." The New Orleans House would have needed a headliner, but Big Brother must have done the Dead a favor, and in any case they were re-establishing themselves. I wouldn't be surprised if Big Brother replaced the Riders at the Family Dog on March 18 as well.

My old reason for rejecting the New Riders date on March 18 was thinking that since the Dead were in Buffalo the night before, it seemed unlikely that Garcia and Hart would fly back for a benefit. Ironically, I actually think Garcia may have flown back anyway, in order to mix Workingman's Dead. However, McNally dates the Dead's discovery of Lenny Hart's perfidy to early March, and I think a big barrier to any New Riders shows was asking Mickey Hart to play. Mickey couldn't not play Dead dates, as the band needed the money too desperately, but the New Riders shows were a different proposition. A few New Riders dates had been booked, but the turmoil surrounding the Dead meant that the shows were never played.

The Dave Torbert Question
Despite my clever line of reasoning in my prior post about the March shows, I had wondered how the Riders had found time to rehearse Dave Torbert enough to get through three nights as a headliner. Looking at Garcia and the Dead's activity level and problems for February and March, I don't think it would have been possible. I think Phil Lesh was still on board as the New Riders bass player, as the band would have had no time to rehearse. The only alternative was that Robert Hunter was going to make his live debut as the Riders bassist, and since these shows were never played, it never occurred.

Whatever Garcia, Nelson and Marmaduke's plans for the New Riders in March 1970--an interesting if only hypothetical question--they were thrown over by chaos in the Dead organization. Thus Dave Torbert's hiring probably did not take place until April of 1970. That would suggest that the first Torbert show as April 17, 1970 at The Family Dog on The Great Highway, presumably after some intensive rehearsal.
Posted by Corry342 at 10:01 AM