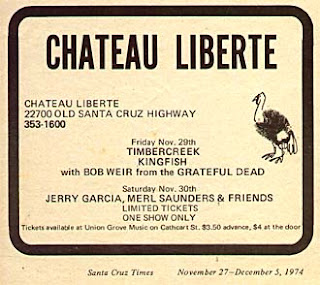 Kingfish was a popular rock band from 1974 through the end of the 20th century, but never more so than when it included Grateful Dead guitarist Bob Weir. Since the early period of Weir's involvement with Kingfish, starting in 1974, mostly consisted of local Bay Area gigs, it has been hard to track the history of the band. Also, the inevitable result of focus on Jerry Garcia has made Kingfish easier to dismiss, particularly at the time. Having seen Weir and Kingfish four times, I can assert that they were an exceptional live rock band in concert. While they tended to similar performances that do not lend themselves to obsessive tape collection--most of the arrangements of the songs never changed--they were a swinging band, and the dynamic of Weir and the great Dave Torbert as front man made them a great bar band who also sounded good in larger places. This post is the first of three attempting to chronicle the known performance history of Weir and Kingfish in 1974-1975.

Kingfish was founded by harmonica player Matthew Kelly in 1974. There is some chance he had performed under the name as early as 1973, but the band officially formed in 1974. Kelly formed the band with former New Riders of The Purple Sage bassist Dave Torbert. Torbert had left the Riders at the end of 1973, for reasons that have never been made clear to me, just as the band was starting to taste some real National success. The original lineup was

All of the band members had many past connections. Torbert and drummer Chris Herold had been in a legendary Palo Alto blues band called The New Delhi River Band (with David Nelson), from 1966 to 1968. In early 1968, Kelly joined NDRB, and after a few personnel changes (Nelson left, for one thing) the group changed its name to Shango. After modest success in the South Bay, Shango was signed by White Whale Records. White Whale changed the band's name to Horses, and after more personnel changes, a very obscure album was released in late 1968 (since re-released on cd).

After Horses disintegrated, Herold's drumming career was constricted by obligations caused by his Conscientious Objector Status (he avoided the draft by driving a hospital truck). Kelly went to England, where he joined a band called Gospel Oak, while Torbert went to Hawaii. On his way from Hawaii to England to rejoin Kelly, Torbert stopped in California and got a fateful call from old pal David Nelson, who invited him to join the New Riders of The Purple Sage, which Torbert did around Spring 1970 (replacing Phil Lesh, who was always a temp).

When Kelly returned to the Bay Area, he worked with a songwriter called David Rea, and performed in Rea's band Slewfoot, along with Herold. Bob Weir, a childhood friend of Kelly's, produced the album, and many of the Riders and the Dead performed on the record (also called Slewfoot). In the meantime, Kelly and Herold intermittently worked with a sort of "Top-40 Jazz Fusion" band--whatever that means--in the Santa Cruz Mountains, called Lonesome Janet. Englishman Mick Ward (possibly "Nick", not Mick, I have heard both) was the pianist, and Robbie Hoddinott was the guitarist and Patti Cathcart (later half of Tuck & Patti) was the vocalist.


In 1973, Matt Kelly was working on a harmonica instruction album with many Bay Area musicians (released finally in 1987 as A Wing And A Prayer). Kingfish apparently arose out of that project, after Torbert left the Riders. Kingfish debuted at the Foothill College Gym in Los Altos on June 7, 1974 (advertised as Torbert's new band),  and then went to Juneau, Alaska and stayed all Summer. Alaska, particularly then, was the Wild West, and there was a lot of oil money, weed and 23-hour days, so the band played numerous gigs and got really comfortable with each other. Kingfish returned home after the Summer ready to conquer, but Ward abruptly died in an auto accident.

According to numerous interviews I have read over the years, mostly in Relix, Kingfish continued to play without Ward, and Weir began to sit in. Weir and Kelly had been childhood friends, but up until the early 1970s they had not played music together, only sports. Kingfish's sound had been designed around having a piano player anchoring the middle, and Weir's unique rhythm guitar style was a perfect fit. What few Kingfish gigs there were must have been pretty low key and probably confined to Marin. In any case, once the Grateful Dead "retired" from performing after their October 1974 Winterland gigs, Weir needed something to do, and Kingfish seemed to fit perfectly. The new band lineup was

November 8, 1974 Boots And Saddle, La Honda, CA Kingfish
[update] It appears that the first public performance by Bob Weir with Kingfish was at a legendary Santa Cruz Mountain hangout called The Boots And Saddle, at 1829 La Honda Road. I only recently discovered this date, on a thread about a long-ago band from that area called Timber Creek (nee Mose). The venue has since burned down.

November 17, 1974 The Lions Share, San Anselmo, CA Kingfish/James and The Mercedes
Prior to my discovery of the Boots And Saddle show, the earliest known Weir performance with Kingfish was not coincidentally the earliest known Kingfish tape. The Lions Share was a musicians hangout at 60 Redhill Drive in San Anselmo. The setlist (available at the fine Weirworks site) shows that no Weir songs were performed, suggesting that Weir was just sitting in.

Kingfish's style mixed Chicago Blues, rockabilly and Bakersfield country, and included many songs known only to people with long memories or big record collections, such as Johnny Horton's "Battle Of New Orleans."  Torbert sang a few originals, but they came from Horses ("Asia Minor" and "Jump For Joy") and Lonesome Janet ("Hypnotize"). Lead guitarist Robbie Hoddinott sometimes sang lead on Junior Walker's "Shake And Fingerpop." With Hoddinott's stinging Telecaster solos, Weir's drive in the middle, the swinging, bluesy feel of Torbert and Herold, along with Kelly's harmonica and guitar colors, Kingfish played in a style that would be called 'Roots Rock' today, but at the time was just called "Rock and Roll."

November ?, 1974 Alpine Hills Country Club, Portola Valley, CA Kingfish
[update] In a post for a nostalgic Facebook group about Palo Alto, a member recalls that Bob Weir played with Kingfish at his wedding reception at the Alpine Hills Country Club in Portola Valley. There is every reason to believe the post. According to him (an old Palo Altan himself), Kingfish rehearsed in a house in Palo Alto on Ramona Street, near the old Palo Alto Times building (at the corner of Hamilton and Ramona). Torbert and Kingfish soundman Tim Hovey lived in the house at the time. Portola Valley was a wealthy community, so the country club was probably a pretty nice place for the reception.

November 29, 1974 Chateau Liberte, Los Gatos, CA Kingfish/Timbercreek
Chateau Liberte was a legendary joint in the Santa Cruz Mountains, hard to find and harder to get to (at 22700 Old Santa Cruz Highway in Los Gatos). It was known as a biker gang hangout (supposedly the Gypsy Jokers), and was apparently not for the faint, but all who recall it think of it fondly. The Doobie Brothers got their start as the house band there around 1970. A flyer survives for this show, also advertising Jerry Garcia and Merl Saunders the next night (the ad above is from the weekly newsaper). The Chateau Liberte show must be the first gig where Weir is an advertised member of Kingfish.

Thanks to a kindly soundman who let people plug into the board, a setlist survives. Weir and Torbert share the lead vocals now, with Weir singing songs like "Mona, " Big Iron" and "Youngblood." The only whiffs of Grateful Dead material are covers of Chuck Berry's "Promised Land," and "Around and Around," both of which fit well into Kingfish's style.

December 13-14, 1974 Chateau Liberte, Los Gatos, CA Kingfish
Kingfish, still working out their sound, returned for a weekend at the Chateau.

December 29, 1974 Keystone Berkeley, Berkeley, CA Kingfish
The Keystone Berkeley was one of the Bay Area's premier rock clubs (I still miss the sawdust filled dump), so a Sunday night performance there was a sign that Weir and Kingfish were serious about their partnership. The clipping above is from the December 27, 1974 edition of The Hayward Daily Review.

December 31, 1974 Stanford Music Hall, Palo Alto, CA Kingfish/Osiris
This show was heavily advertised around Palo Alto (I wish I still had the flyer). The Stanford Music Hall was a movie theater built in 1925 that was refurbished as a kind of mini-rock palace. It was a nice place to see a show (I saw Kingfish there a year later), but too small to make money for a place that did not have a bar. Interestingly, The Stanford Music Hall was at 221 University Avenue, just a few blocks from Dana Morgan Music (at 536 Ramona), where Garcia and Weir met, and two blocks from the Top Of The Tangent (at 117 University) where Mother McRee's Uptown Jug Band Champions evolved into The Warlocks. This show would have been Weir's first paying gig in downtown Palo Alto since those days.

Osiris was a Palo Alto band featuring Kevin McKernan, Pigpen's younger brother. He looked eerily like Pig--once he passed me by on his bicycle, and a friend pointed him out, and it was like seeing an album photo come to life.

next: Kingfish performance history from January through June of 1975
Posted by Corry342 at 5:24 PM