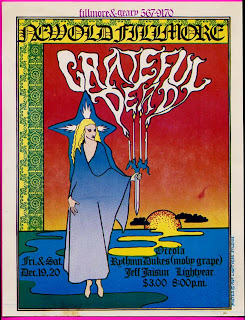 A run of the mill pair of shows – nothing obviously notable except the support acts. My Grateful Dead list (and I guess we all have one of those) also shows a performance at the same venue on December 21, the Sunday. But without the means to check (given I am writing this from 38,000 feet over Canada), I am assuming that this was an entirely separate event.

I want to concentrate on a couple of the support acts, but following Corry’s template I shall briefly review all of the performers.

Grateful Dead: From what little evidence exists, they were a popular music combo based in San Francisco. By all accounts they had quite a keen following.

Osceola: Sometimes found as Oceola – a Family Dog at the Beach (660 on The Great Highway) favourite that first appeared around October 1969. I should probably know way more off the top of my head, but sadly don’t.

Rhythm Dukes: This really is off the top of my head, but as I recall: (a) Matthew Katz laid claim to the name Moby Grape and the remnants of the band took on the name Rhythm Dukes, (b) at some point they pulled in John “Fuzzy” Oxendine and John Barrett from local “filler” band Boogie, (c) they played the Second Sky River Festival, and (d) Oxendine kept on working with Jerry Miller in later years.

Jef Jaisun: Ah, El Jefe. Multitalented Jef Jaisun – artist, lover, pop singer, journalist, photographer, memory man – first showed up at the Jabberwock on June 3, 1966. Jef’s real claim to fame is that Richie Unterberger accused him of being the janitor at the good old ‘Wock – and that may be how he goes down in history. But we know better. I would like to quote now from those nice folk at www.chickenonaunicycle.com: This is the night that twenty year old aspiring musician and photographer Jef Jaisun first walks in to the Jabberwock. It was 1:45 am and Perry Lederman is playing a guest set which consists of a half-hour raga like piece on electric guitar. Lederman, though little known now, was widely regarded by local musicians at the time. He was a solo guitarist somewhat in the John Fahey mode, but more influenced by Indian music. His only known recording was on an Arhoolie sampler. He was also a seeker-out of vintage 3/4-size Martin guitars, which he continued to favour throughout his life. Lederman died at the age of 52 in 1995. Jaisun will become immortal in the Bay Area for producing the much-played and fondly remembered record “Friendly Neighborhood Narco Agent”. This record, independently released as a 33 RPM EP by Jaisun in 1969, was later picked up Dr Demento, and the song reached an audience outside the Bay Area. See http://www.eljefe.net/fnnafaq.html for the hilarious and unbelievable story of this song. Jef recalls "The entire package was patterned after Country Joe's Rag Baby EPs, right down to using Sierra Sound as the recording studio. I figured if it worked for him, well... not to mention that people in the Bay Area, and Berkeley in particular, had become accustomed to that type of EP packaging, thanks mostly to Joe. Several other folkies released similar EPs about the same time". Jef also has another significant link to the Grateful Dead as he was later a member of Phoenix – who with their co-conspirators and predecessors (Universal Parking Lot, Bluehouse Basement and Mount Rushmore) appear as support to the Dead on many occasions. This is a show probably of transition. We saw a year or so gap between the last Phoenix show and a flurry of shows in San Francisco. The “imposter” Phoenix (who had a couple of albums on ABC) were unlikely to have been responsible for these shows, but the mid decline appearance of a JJ show sort of hints that the efforts made to figure out the history of Phoenix were probably correct.

For his great sense of humour, fabulous recollections and for being an all around good egg, Jef remains on the good guy list to this day. I dropped the ball over completing the Phoenix/Mt Rushmore tree (due to work commitments) and then went off at a tangent – but by the end of the year we will be back on track.

Lightyear: The clue for me here is in the poster. I don’t know of Lightyear at all but the poster is credited to Lightyear Studios. I am going to go out on a limb and suggest that Lightyear were a lightshow/art group. Little has been written to recognise the light shows and the work they did – eventually receiving billing and payment in line with some of the bands. So (a) we should perhaps make a little more effort in documenting the light shows, and (b) we would be really appreciative of knowing more about Lightyear.
Posted by The Yellow Shark at 8:55 AM