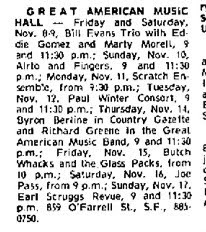 Deadbase and The Jerry Site list Jerry Garcia and Merl Saunders as playing The Boarding House in San Francisco on December 12 and 13, 1974 (Thursday and Friday), just prior to a weekend trip to Oregon for gigs in Portland (December 14) and Eugene (December 15). The Boarding House was an intimate theater on 960 Bush Street (near Taylor), a lovely venue that mostly featured acoustic or songwriter type acts rather than loud rock. Old And In The Way, for example, performed there in 1973 and the tracks were used for their album. Rock wasn't unknown: Garcia-Saunders played there regularly in 1973, and I saw The Tubes play some memorable gigs there in 1975, and I saw Carlene Carter play with The Rumour in 1978 and Clover in 1979. However the ambiance of the little theater was more oriented towards listening than rocking.

The top listing, from the music section of the December 6, 1974 Hayward Daily Review, however, showing Maria Muldaur and The Great American Music Band playing the Boarding House from Thursday December 12 through Sunday the 15th insures that Garcia-Saunders did not play. Maria Muldaur was a more typical act for The Boarding House, and she had a hit single ("Midnight At The Oasis") and could have easily sold the place out, so there would have been no need or point for Garcia-Saunders to make a surprise appearance.

Nonetheless, given the naming of her band as "The Great American Music Band," and the fact that Maria Muldaur made a guest appearance with the Great American String Band, featuring Jerry Garcia and others, on April 20, 1974 (at The Pilgrimage Theater in Los Angeles), it is deeply tempting to suggest that Garcia showed up to the Boarding House anyway. John Kahn was Maria's boyfriend, after all, and she even ended up as a temporary member of The Jerry Garcia Band in 1978. Much as I wish to be able to list "December 12-13, 1974/Boarding House/JG guests on banjo with Maria Muldaur," I don't think the facts support it.

The original source of the date was almost certainly Dennis McNally's list (which he kindly passed on to me in the 1980s). Many of his listings came from Musicians Union records or advertisements, and while they are often the only reference, they are surprisingly accurate. Nonetheless, for obvious reasons Garcia and Saunders changed their local schedule around often, and a tentative booking for a gig could easily have been replaced by a more lucrative gig for the bass player's girlfriend. The fact that the listing exists at all is the sole hope that Garcia made some kind of appearance.

With all that being said, knowing that Garcia wasn't playing, it seems pretty plausible that he did show up to see his bass player's girlfriend strut her stuff on one of those nights--wouldn't you, particularly if your bass player was dating Maria Muldaur?--but I suspect he just hung out rather than played. Outside of the context of this blog, there does seem to be some interesting continuity between The Great American String Band, a group formed by David Grisman, David Nichtern and others to do for all American music what Old And In The Way had done for bluegrass, and the Great American Music Band, but that is a topic for a different blog.
Posted by Corry342 at 11:07 AM