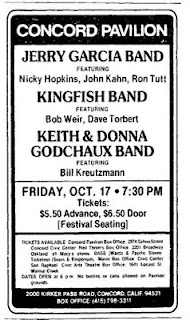 After the Grateful Dead "retired" from performing in October 1974, Bob Weir started to play some gigs with his friend Matt Kelly and former New Rider Dave Torbert in their band Kingfish. After a few late 1974 gigs, Weir became a member of the band, and the group started to learn new material and gig seriously around the Bay Area. This post covers the period from August to December 1975. The Grateful Dead were working on the album in Weir's home studio that would become Blues For Allah, but save for a few stealth dates they were not a performing entity. Weir and Kingfish performed steadily however, and I suspect the dates listed here are only partially complete.

This is the third installment on Kingfish's performance history (for the first two, see here and here). The sources from my dates include Deadbase IX (to which I was an initial contributor), the fine Weirworks site, some contemporary newspaper archives and a few other sources. I believe there are still many dates to add to this list. If you know of one from this period, please Comment or contact me, and I will add them to the list.
(note: dates added to the original post are shown as added).

August 9, 1975 Frost Amphitheatre, Stanford University Eric Clapton/Kingfish
I am aware of no Kingfish gigs between June 20 and August 9, and there are almost no Jerry Garcia gigs for that period also. I have to assume Garcia and Weir were focused on finishing off Blues For Allah. Although Kingfish had its own throwback sound, they communicated well as a conventional rock band, and opened a number of big shows around the Bay Area. Stanford University, after some bad experiences with Frost Amphitheatre in the early seventies, still alllowed the occasional rock show. Eric Clapton had only returned to performing the year before, and this was a very big deal of a show.

I attended this show, and Kingfish absolutely knocked me out. I had seen the Dead a few times, and I understood they weren't the Dead, but Kingfish managed to get a lot of motion out of a very few notes. Weir and Torbert's experience in larger venues really showed. Torbert was a terrific presence, too, for those who weren't lucky enough to see him, and his Cowboy Surfer cool made a nice contrast to Weir's dynamic presence (I'm pretty sure the girls really liked him too).

Clapton and his band were great, and Carlos Santana showed up to jam on the encore, but that's for another blog.

There are probably a number of gigs I am missing from this period.

Fleetwood Mac, newly-reconstituted with Lindsay Buckingham and Stevie Nicks, had just released their Fleetwood Mac album. The band had been very well-received at an Oakland Coliseum Day On The Green on August 3. They were now playing shows around California. Mick Fleetwood had jammed with the Dead a few times in 1970 (the other band members who had played with them were no longer with the group).

The Olympic Gold Ice Arena had opened in Modesto in 1972, and was used for occasional concerts. It burned down in 1976. The site is currently a parking lot for Modesto Junior College. [added]

August 31, 1975 Alpine Meadows, Lake Tahoe, CA: Boz Scaggs/Kingfish
Alpine Meadows was a ski lodge in the Lake Tahoe area. In the summer it was used for the occasional concert. Boz Scaggs was a big star in the Bay Area at the time, and played with an orchestra (local string players playing charts). Kingfish opened the show. Some photos have recently surfaced. Looks like a nice day outdoors...[added]


September 13, 1975 Stanford Music Hall, Palo Alto Kingfish/Link Wray/Barry Melton
Kingfish returned to the Stanford Music Hall, where they had played the previous New Year's Eve. This was the second time I saw them, and they played a lengthy, dynamic show. It is easy to listen to old Kingfish tapes and shrug that their playing seems rather simplistic, but it had a very powerful effect in concert.

Barry Melton was added to the bill at the last minute, and opened the show with a solo performance.

October 4, 1975 Winterland Kingfish/Sons of Champlin/Keith and Donna
Kingfish was a terrific live band, but many California Deadheads had seen them a number of times by now. One friend of mine who attended the concert said that while Keith and Donna and The Sons were great, he felt that Kingfish wasn't playing anything new. In that respect Kingfish was acting like a normal rock band, but Deadheads were used to constant variation, even at the cost of sloppinesss.

October 17, 1975 Concord Pavilion Jerry Garcia Band/Kingfish/Keith and Donna
I attended this show, and once again Kingfish played great, although even I noticed that I was starting to become awfully familiar with Kingfish's material on only my third show. Even though Jerry Garcia was the advertised headliner (the ad above is from the October 5, 1975 Oakland Tribune), Kingfish closed the show. In the Bay Area, at least, when Kingfish and the Garcia Band shared the bill, Kingfish usually closed.

Although the show was well attended, it was nowhere near sold out. Garcia and Weir were so omnipresent in the Bay Area that there wasn't an air of specialness to their performances. For Bay Area fans, that lead to a relaxed atmosphere at local shows.

November 6, 1975 Elting Gym, SUNY, New Paltz, NY Kingfish/Keith and Donna
Kingfish and Keith and Donna toured the East Coast in November. In the Bay Area, with Jerry Garcia a regular in nightclubs since 1970, Deadheads were very casual about the opportunity to see Grateful Dead spinoffs. In the East, however, the chance to see 4 members of The Dead (Weir, Kreutzmann, Keith and Donna) plus an ex-New Rider (Dave Torbert) in the same night was somewhat of a big deal. The Kingfish/Keith and Donna bill played medium sized theaters that neither band could have played at home. I have to presume that the bands also only used one crew and one sound system, another efficiency.

November 9, 1975 Pritchard Gym, SUNY, Stony Brook, NY Kingfish/Keith and Donna
We only have scattered dates from the East Coast tour, mostly based on what tapes have survived. The Beacon show was on a Friday, and the Stony Brook show was on a Sunday. I have to believe the bill played somewhere in the Tri-State Areaon Saturday night. I don't think the tour played every night, but most tours make sure they fill in their weekends.

November 10, 1975 War Memorial Auditorium, Trenton, NJ Kingfish/Keith and Donna
Kingfish returns to Trenton. The small auditorium is only two-thirds full (per a review), but that's pretty good for a Monday night. A Commenter reports that there was an early and a late show. [added]


November 12, 1975 New Century Theater, Buffalo, NY Kingfish/Keith and Donna
The tour hit Buffalo on a Wednesday night. Thanks to commenter David for tracking this down. Also, he found excellent photos of the show.

November 22, 1975 Masonic Temple, Scranton, PA Kingfish/Keith and Donna
I do know a Scranton native who attended this show, and it was a very big deal for any Grateful Dead related bands to play in Scranton. He had nothing much to compare it to, but he thought it was a terrific show (and he went to Harvard).

November 24, 1975 Palace Theater, Albany, NY Kingfish/Keith and Donna
This was a Monday night show, which suggests that the tour played a lot more than just weekends.

November 25, 1975 Student Union, U Mass-Amherst, Amherst, MA Kingfish/Keith and Donna
There were early and late shows.

Somewhere between Nov 22-29, 1975, Kingfish & Keith & Donna played a small college (Thiel Coll) in rural western PA. And for our little coterie of Deadheads adrift in northeast Ohio at the time, it WAS A BIG DEAL! We showed up expecting a Dead show type crowd experience but instead were greeted by a practically deserted sleepy college town and equally sparsely populated theatre! We have an amazing story surrounding this adventure, perhaps for another time...It DOES get stranger

I have assumed that the date was Friday, November 28, although I don't know that for certain. A correspondent adds


The show was in a (small) theater, probably in the student center (it definitely was not in a gym).  I'm not sure if the Passavant Center on campus was there in 1975 (2,000 seat) but if it was the venue, it would have been (way) less than 1/4 filled for that show.

This hitherto forgotten event serves as a nice reminder that when a band featuring a member of the Grateful Dead came to a smaller city or a more out of the way place, it was still a memorable event for those in attendance. Deadheads lucky enough to live in the Bay Area or New York City could be casual about regular Deadheads and accessible Garcia appearances, but part of the Dead's magic was their relentless journeying to unconquered territory (added).

November 29, 1975 Tower Theater, Upper Darby, PA Kingfish/Keith and Donna
This was the Saturday after Thanksgiving.  Once again, a Friday show somewhere seems likely.

December 6, 1975 My Father's Place, Roslyn, NY Kingfish
I assume we are missing numerous dates from the East Coast tour.

Kingfish continued to tour throughout 1976, and they also recorded an album at Weir's studio, released on Round/UA in March of 1976. However, once the Dead returned to action, it was clear that Weir's role in Kingfish was part time at best. Weir stayed with Kingfish until August of 1976, when his Grateful Dead schedule took over permanently. Weir would continue to guest periodically with Kingfish over the next few decades.


Until I complete my research on 1976 Kingfish dates, the best source is Weirworks, which I have not yet been able to improve on.
Posted by Corry342 at 7:46 PM