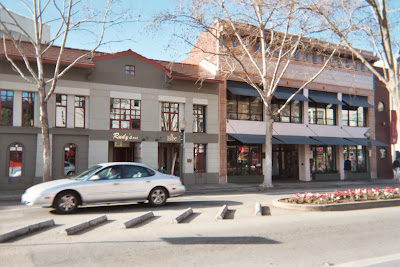 The Tangent looms large in Grateful Dead history. In 1962, two bored doctors at Stanford Hospital had decided to open a folk club in Palo Alto. Dennis McNally tells the story in some detail (p47). The  young doctors, Stu Goldstein and David Schoenstadt, decided to open a folk music club based on a Pete Seeger book called How To Make A Hootenanny. An establishment called The Palo Alto Deli, at 117 University (owned by Max and Bertha Feldman), had an extra room upstairs, and that turned into The Tangent. If I understand correctly, The Tangent was a sort of pizza parlor, and the room above it was "The Top Of The Tangent," the little folk music place. It apparently seated about 75 people.

The club opened in January 1963, and it instantly became the Folk Music hangout for Palo Alto bohemian folkies. Jerry Garcia and The Wildwood Boys were known to have played there as early as February 23, 1963, although no doubt Jerry had already played there by then, at hoots if nothing else. The club was also the birthplace of Mother McRee's Uptown Jugband Champions. By 1965, Garcia and Bob Weir worked a few blocks away at Dana Morgan Music (on Ramona), and Bill Kreutzmann worked at Swain's (on Hamilton).

In March 2006 I was in Palo Alto and I took a picture of the building as it stood, and more or less stands as recently as last year. The building housed a pub named Rudy's, as well as a German restaurant called Elbe. Elbe has sinced closed, and seems to have become an adjunct to Rudy's. Downtown Palo Alto since the 1960s has become an extraordinarily upscale dining Disneyland, and apparently Rudy's remains one of the last "dive bars" in Palo Alto, where non-rich people can hoist a few and have a burger.

The building to the right of 117 University is 135 University, which used to be the home of Palo Alto's second and last "psychedelic" venue, The Poppycock. I have written about The Poppycock elsewhere. The Tangent remained an active folk club until at least 1969, possibly later, although it may have changed its name to The Trip Room. The room was not without history after Garcia went electric, however. A local engineer named Chris Lunn started a series of open mike songwriter's workshops at The Tangent. The best of these players played around Bay Area clubs under the name Folk And Blues Workshop. Lunn ultimately moved to Tacoma, WA, where he continued his program, which ultimately lead to a long running organization called Victory Music.

The Poppycock burned down in early 1971, and the building was substantially remodeled. I have to imagine that the building housing The Tangent was remodeled too. I do not know (nor recall) what was in 117 University between then and the 21st Century. Nonetheless, this photo gives a glimpse at the tiny size of The Top Of The Tangent, a little acorn where a mighty oak would grow.
Posted by Corry342 at 3:50 PM