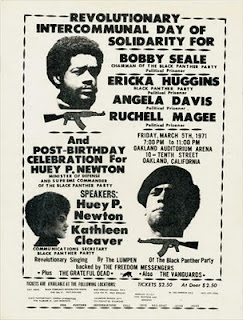 Oakland Auditorium Arena, at 10 10th Street right near Downtown, looms large in Grateful Dead history. After Winterland closed in 1978, the Auditorium became the Grateful Dead's "Home Court," and there were many great shows there. The building was remodeled and renamed the Henry J. Kaiser Convention Center, and much improved, but the Dead were still its most memorable tenant throughout the 1980s. In many ways the Grateful Dead can get credit for showing that the venue was a viable concert venue after all, since it was hardly used for rock music between 1967 and 1979, and the city of Oakland was the beneficiary.

One Grateful Dead show at the old Auditorium that is generally missing from most chronologies (including Deadlists) was the band's appearance at a Black Panther Benefit celebrating Huey Newton's birthday, among various other things. The Black Panther Party were a crucial cause celebre in the East Bay and throughout the Nation, and Oakland Auditorium was about a mile from the Panthers birthplace just across the Grove Shafter freeway. The story of the Black Panthers and their complicated relationship with hippies and liberals is well outside the scope of this blog, but suffice to say that the normally non-political Grateful Dead could feel comfortable supporting the Panthers since they were seen as trans-political: supporting the Panthers at the time was like opposing the Vietnam War or being pro-Ecology, a moral position that superseded any immediate political issues.

I do not know what the social connection between the Grateful Dead and The Black Panthers might have been. Nonetheless, there they are on the flyer, effectively headlining the party. The Black Panthers were always under heavy police pressure, and they responded to it by being heavily armed. For most white hippies, even the most liberal, a trip into Oakland to attend a Panther event would have been daunting indeed. Its not surprising there are no audience tapes or reviews of the event, to my knowledge. Given the number of speakers and the 4 hour running time, the Dead would not likely have played a full show.

The only thing I ever heard about this show, 10 years later and about fourth hand, was that "it was strange" (I'll bet) and "some member of the Dead didn't show up." I later realized that Mickey Hart had just left the band in New York, so a fan who showed up at the Oakland show would simply have perceived at as Mickey not being present. I realize there was apparently a Fillmore West show two days earlier, and Mickey wouldn't have played there either, but without an Internet it took a long time for that kind of information to circulate widely.
Posted by Corry342 at 8:35 AM