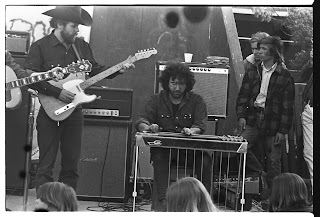 I have written recently about the Grateful Dead and Jerry Garcia's unexplored relationship to Menlo Park. In particular, New Riders of The Purple Sage songwriter John Dawson had graduated 8th grade from a progressive (and still thriving) establishment called Peninsula School, founded in 1925, and still located at 920 Peninsula Way, and as a result the New Riders played the school 3 times. Palo Alto resident Michael Parrish attended the second of these shows, on Tuesday April  28, 1970. He was kind of enough to send along a photo for my previous post, and he has been even more gracious to send some additional photos.

In April 1970, the New Riders of The Purple Sage had existed in some form or other since May of 1969, but had been confined to occasional Bay Area club performances when the Grateful Dead were not performing. The sole exception to that had been a few shows in the Pacific Northwest in August of 1969, where the Dead seemed to have tested the concept of bringing their opening act with them. In May of 1970 the Grateful Dead set off on a famous tour of Eastern Colleges, and the New Riders would open most Dead shows for the next 18 months.

Update: we have now determined that the show was Tuesday, May 19, 1970, thanks to a note in the Stanford Daily newspaper. I have left the language here intact, however, as save for the date it is generally correct. 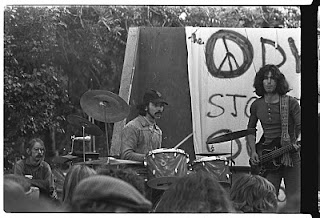 By the time of the National debut of the New Riders, while Dead drummer Mickey Hart remained on drums, Dead bassist Phil Lesh had been permanently replaced by Dave Torbert. Torbert had played with Nelson in the New Delhi River Band from 1966 to 68. Dead lyricist Robert Hunter and soundman Bob Matthews had rehearsed with the Riders in the meantime, but were apparently never considered as regular members.

The New Riders played the Peninsula School afternoon show on Tuesday, April 28 and then played The Matrix in San Francisco two nights later (April 30). The Dead/NRPS tour began in Alfred, New York on May 1. I am assuming that the Riders played this casual gig--apparently some sort of benefit, according to Parrish, but I can't read the sign behind them--as a sort of dress rehearsal for their upcoming tour. 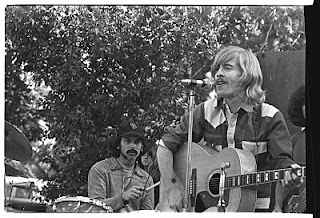 I used this photo in my previous post. However, viewed as a set, these three photos illustrate what a casual, fun gig the New Riders were for Jerry Garcia. Although the Grateful Dead were in dire financial straits in Spring 1970 (as they usually were), they were still legitimate rock stars. They had a huge, Owsley-designed sound system (even if Bear's travel with the band was restricted), a substantial road crew, and every show had the usual assortment of hangers-on, wannabes and would-be groupies. Yet while I am no expert on equipment, it looks to me to be a pretty casual setup. Mickey Hart seems to have no drum mikes whatsoever, and it appears there is nothing for amplification except the guitarist's amps. The Riders seem to have a "classic rock" set-up: Fender pedal steel and amps for Garcia, Fender Telecaster and Marshall for Nelson, and some sort of Fender bass for Torbert and an unidentifiable (to me--Blair J, are you out there?) bass cabinet. Presumably John Dawson's (miked) acoustic guitar and vocal mic are run through one of the speakers. Note also that we can see no other mikes for the harmonies, and Nelson and Torbert probably just stepped up to Dawson's mike like they were in a bluegrass band.

A sunny Tuesday afternoon in April, the Dead ready to leave on a National tour two days later. John Dawson agrees to a gig at his old school, and the band shows up with their rehearsal equipment. A few awed teenagers are around (one taking the photos, another visibile stage left behind Garcia), but otherwise just another nice Spring day in California, long ago.
Posted by Corry342 at 7:59 PM