I recently wrote an extensive post detailing known information about Grateful Dead and Jerry Garcia performances in September and October 1969. I have found some new information, so I thought I would create a separate post (I will update the previous post, too, in order to maintain continuity). This post only addresses New Riders of The Purple Sage performances for October 1969.

October 9, 1969 Inn Of The Beginning, Cotati, CA New Riders Of The Purple Sage
In the previous post I discussed the New Riders appearance at the tiny Inn Of The Beginning, at 8201 Old Redwood Highway in the college town of Cotati, on Thursday, September 18, 1969. That show was known from a surviving tape, and I confirmed it with a listing in Ralph Gleason's SF Chronicle column. I speculated that there were likely to be more New Riders shows at the Inn Of The Beginning, and I found one for Thursday, October 9 (the admittedly hard-to-read listing is from Gleason's Chronicle column of Wednesday, October 8).
From what I have been able to determine, during late 1969 The Inn Of The Beginning had relatively well-known club bands on Friday and Saturday nights (on the order of, say, Dan Hicks And The Hot Licks or The Bronze Hog). I have to assume they had lesser known local bands or solo performers on other nights. Thus it makes sense that Garcia and company could quietly book a Thursday night, probably with relatively little notice, because they weren't disrupting the club or changing another band's plans.
October 14-16, 1969 Mandrake's, Berkeley New Riders Of The Purple Sage
I discussed the band's 3-night stand at this little Berkeley pool hall (at 1048 University) in the previous post.

October 17, 1969  Student Union Ballroom, San Jose State College, San Jose New Riders Of The Purple Sage/The Fourth Way
In the previous post I speculated on the idea that this vague date represented a New Riders performance rather than a Grateful Dead show. This listing from Gleason's column on Friday, October 17 confirms it. I had assumed that where Gleason says "Student Union Ballroom" he is referring to the Loma Prieta Room, where the Grateful Dead would perform exactly two weeks later. However, Michael Parrish explained that the Student Union Ballroom (now called the Ron Barrett Ballroom) was a larger configuration of the room that included the Loma Prieta Room. The Student Union Ballroom had a capacity of only 728 (officially), so it means the New Riders actually played a larger venue (or a larger configuration of the venue) than the Dead would just two weeks later (Loma Prieta Room officially holds 588).
Another interesting note here is the opening act, The Fourth Way. The Fourth Way were an electric jazz rock band, originally formed to back John Handy. When Handy was unable to work with them, the band chose to continue on their own. The group were regulars at The New Orleans House in Berkeley, and ultimately released three albums on Capitol. The band consisted of New Zealander (via Boston) Mike Nock on electric piano, Ron McClure on bass, Eddie Marshall on drums and Micheal White on electric violin. In another post I had posited that White had joined the Dead for a few numbers at the Family Dog on August 3, 1969. The Fourth Way's presence at this San Jose show a few months later proves exactly nothing, but its the kind of tenuous link I find intriguing nonetheless. 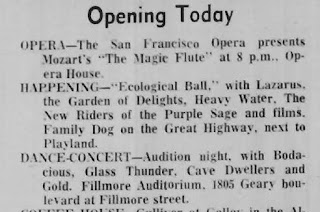 October 22, 1969 Family Dog on the Great Highway, San Francisco "Ecological Ball" with Lazarus/Garden Of Delights/Heavy Water/New Riders Of The Purple Sage and films
This show had been known from an obscure flyer, but this listing in the Wednesday, October 22 Chronicle sheds slightly more light on the event. Only the Riders and Lazarus were rock bands, as Garden Of Delights and Heavy Water were light shows. The evening sounds like what today would be called a "multi-media" event. The Riders probably played one set.

Lazarus was a popular Berkeley band, although they were not well known outside of the East Bay.
Posted by Corry342 at 5:14 PM