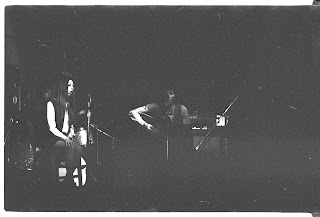 Jacqui McShee and Bert Jansch of Pentangle, on stage at the Fillmore West, March 1, 1969 (photo by and courtesy of Michael Parrish)

The Grateful Dead's monumental 4-night stand at the Fillmore West from February 27-March 2 passed into legend long ago, as the primary source material for Live/Dead. The tapes circulated for years, but any speculation about the power of the band at their best was put to rest when the entire run was released as a 10-cd set in 2005 (Fillmore West 69: The Complete Recordings). This was the Grateful Dead playing at their best in a comfortable environment, and recorded by state-of-the-art equipment. Its hard to think there would be more to say about the Grateful Dead's music that weekend, but there was another very critical musical event during that weekend that had a profound influence on the Grateful Dead's music, namely the revelation of hearing the opening act Pentangle.

Pentangle, who only existed from 1967-73, is mostly forgotten these days by all but their fervent fans--of whom there are quite a few--and in any case they are fairly or unfairly lumped together with English folk-rock bands like Fairport Convention or Steeleye Span. Much as I love the Fairports, Pentangle doesn't sound like them or anyone else. However, the band's relevance to the Grateful Dead is that they apparently dramatically influenced Jerry Garcia and the Dead's interest in performing acoustic music live. Pentangle had a unique lineup for the time, with two phenomenal acoustic guitarists and an amplified rhythm section, underlying the brilliant vocals of singer Jacqui McShee. Pentangle played disciplined arrangements and yet improvised freely, seamlessly merged numerous styles of music, performed brilliant originals and surprisingly arranged cover versions--does this sound like a band we like?--and did it all sitting down, with two acoustic guitarists.

It would take almost another year before the Dead broke out their acoustic format, with Garcia and Weir playing acoustic guitars and singing over an amplified rhythm section, but according to various references the band got the idea from hearing Pentangle. One thing about the Fillmore West shows that seems to have been forgotten is that the format in the 1960s was very different than today. Most rock concerts, and all Fillmore West shows, had 3 or 4 bands. At the Fillmore West, all three acts played a set, and then all three acts played another set, so the Dead would have performed third and sixth (last). The audience would sit through all the sets (if they liked the bands), but the business of the Dead playing a few long sets in a row did not come in until early 1970. One of the byproducts of this arrangement was that the headline act had to be "in the house" when the other bands where going through their second round, so musicians had little choice but to hear each other play.

Pentangle would have played 8 sets at the Fillmore West, and while Garcia and the boys may or may not have seen the first one, I'll bet they didn't miss the rest of them. I don't usually link to concert recordings, but hearing Pentangle live is a revelation (Berkeley Community Theater May 29, 1970). They are impossible to quantify, and bassist Danny Thompson (later better known for working with no-relation Richard Thompson) and drummer Terry Cox are as much a part of the music as acoustic guitar giants Bert Jansch and John Renbourn, and McShee (and Jansch) provide perfect vocals without drowning the band. They can cover old folk songs ("Sally Go Round The Roses"), jazz standards (Mingus's "Goodbye Pork Pie Hat") and originals (the twenty-minute opus "Pentangling"). Pentangle's song "Cold Mountain" is done to the tune of "Dark Hollow", and even includes the "I'd rather be in some dark hollow" verse," and save for McShee's angelic vocals its pretty close to what we recognize as the Dead's arrangement.

So if one of the best recordings of one of the best runs by the Grateful Dead wasn't enough, a fantastic opening act had a big effect on the future of Grateful Dead music, showing them that improvised acoustic music with a rhythm section was viable in a concert setting. Pentangle reforms once in a while for a few concerts, most recently in 2008, to a rapturous reception, fitting for what I believe to be the only rock band that can be creditably certified as having influenced both the Grateful Dead and Led Zeppelin.

Oh yeah, by the way--the Sir Douglas Quintet opened the show (a tape floats around from Feb 27), and they were really good too.
Posted by Corry342 at 1:11 PM