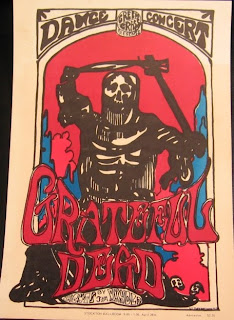 The Grateful Dead concert at the Stockton Ballroom, in Stockton, California on Friday April 28, 1967 has always had an air of uncertainty to it. The concert had originally been known from a poster advertising the show (above). However, over the years there had been some question about the provenance of the poster as an artifact (copies may have been made after the fact, apparently) so the existence of the show couldn't be confirmed. Nor did there seem to be evidence of a tape or a review confirming the event.

On the other hand, a Friday night show in Stockton, a small but important city in the Central Valley, about 80 miles East of San Francisco, seemed like a very plausible 1967 venue. On dead.net, commenter Ernie Reed had said


I remember Viola Lee, Golden Road and Cream Puff War because I knew them from the 1st WB album. My ear was still commercially tuned but remember being floored by Viola Lee...Jerry with no beard, talking with folks in the lobby...

Eventually, I found a reference from Jerry Garcia about the show, in an interview with Ralph Gleason in the May 14, 1967 San Francisco Chronicle, so it seemed fairly certain that the Stockton show took place.  Nevertheless, an intrepid researcher finally found a reference to the show in the April 26, 1967 edition of the Lodi News-Sentinel, accessible on Google News (Lodi is another Central Valley town, not far from Stockton--John Fogerty wrote a famous song about it, occasionally performed by the New Riders).

It seems that the Grateful Dead performance at the Stockton Ballroom (on 9650 Thornton Road) was an event sponsored by the Pacific Student Association, the student organization of Stockton's University of The Pacific. The dance was part of an annual week of events celebrating Mardi Gras (yes, in April). The theme of the week was "A Thousand Clowns." Friday night began at 5:30 pm with a barbeque on campus, then at 7:30 the "Mardi Gras Queen" and "Ugly Man" contestants were introduced at the school auditorium. Prizes would also be awarded for a special beard growing contest. The Grateful Dead performance was later that evening.

The Stockton Ballroom was some miles from campus. While it appears that regular people could gain admission to the show, the event was sponsored and produced by the Student Association, so that explains why there was almost no publicity and no review of the concert, as it was more of a dance. I can see from YouTube videos of the Stockton Ballroom (from 2009, not 1967) that the facility is pretty small, with room for perhaps 1000 people, but the show would have been subsidized somewhat by the school, and in any case the Dead weren't doing anything else that night. Since it was a school event that started late (after the beard-growing prizes were awarded), there did not seem to be room or a need for an opening act.

The University of The Pacific was founded in 1851(as California Wesleyan College) in Santa Clara, and was California's first college. It was also the first California college to admit women, which it did when it moved to San Jose in 1871. The school has had a substantial history since then, and after a number of mergers it moved to Stockton in 1925. The school is particularly well regarded for its affiliated professional schools, including McGeorge Law School, which is located in Sacramento (about 50 miles North).
Posted by Corry342 at 1:44 PM