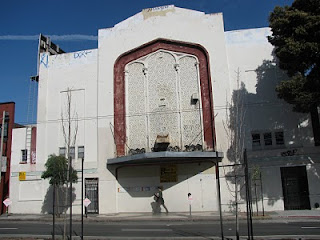 616 Divisadero Street in San Francisco, the former site of The Harding Theater, as it appeared in March 2010

Many Grateful Dead fans only know venues as part of a tape label. For many decades, I was only aware of San Francisco's Harding Theater because of a widely circulated KSFX-fm broadcast from November 7, 1971. I knew nothing else about the venue, and I didn't know where it was. I learned over the years that the Dead had played November 6 as well, and I even learned (only in this century) that the New Riders of The Purple Sage had played there on September 23, 1971. That apparently thinly-attended performance seems to represent one of the first instances of the Dead using one of their spin-off bands to check out a venue. Very recently, I learned of a lengthy weekend long benefit in Halloween 1970 for the nearby Both/And jazz club (at 350 Divisadero), where the New Riders may have played. Big Brother may have played there at that time (ca. November 1) as well, possibly as part of the same event.

Whatever the story of the venue, however--I had read somewhere that it was a converted church--after the November 1971 Grateful Dead shows the Harding Theater dropped off my radar. Without thinking about it, I had assumed that the venue was long-gone, converted to condos or office buildings like so many properties near the Haight Ashbury. Due to the miracle of Google, however, and blogging in general, I did recently discover the address of the long-gone Harding Theater.

Thus I was quite surprised by a recent check of the address on Google Street View to see that the building at 616 Divisadero was apparently intact. A recent trip to San Francisco confirms this, as the above photo attests. Even more remarkably, the site of the former Harding Theater was just across from a Cafe where I have eaten and drank coffee many times (The Bean Bag Cafe, at 601 Divisadero), so the venue had been staring me in the face, but I wasn't listening.

A close-up look at the building reveals that it is for lease, which according to a local resident, it has been for many, many years. Although its hard to tell from the outside, the building does not look large by modern rock concert standards, so it probably had little chance of being viable as a music venue. Divisadero Street is a main thoroughfare on the downtown side of the Haight Ashbury, and the Harding was just West of Alamo Square, on Diviz (as the natives call it) between Hayes and Grove. The parking situation is never attractive on Divisadero, and although there are some cool places on the street now (like The Bean Bag), it was probably somewhat sketchier back in the day. The City seems to be taking steps to improve the street, with a nice tree-lined central strip, so perhaps the Harding Theater may have a "Furthur" story to tell. 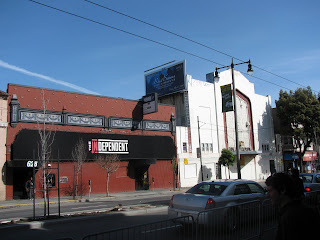 A photo of 616 Divisadero in San Francisco, the former site of the Harding Theater, and 628 Divisadero, the current site of The Independent nightclub, in March 2010

As if to add to my myopia, the Harding is next door to a building that has been a long-time music venue in San Francisco where I have seen many shows. 620 Divisadero, sometimes advertised as 628 Divisadero, became the second site of the Both/And jazz club, probably in the late 1970s (after it moved from 350 Divisadero). Since Use Permits tend to remain in force, the establishment has presented music more often than not the last few decades. In the mid-80s, 620/628 Divis was a club called The VIS, where I once saw fiREHOSE (after seeing Humble Pie earlier that evening at The Stone, thus getting 20 years of rock history in one night). From the late 1980s until well into the 1990s, the venue was called The Kennel Club (I saw NRBQ and many other bands there). By now its called The Independent (at 628), and it still seems to be thriving, more or less.

Did I ever go to The Bean Bag, or the Kennel Club, and listen to the Harding Theater tape as I drove home over the Bay Bridge? Even though I probably didn't, I could have, with no inkling that the building was waiting quietly for me the whole time. Given the passage of time, its startling how much history remains intact.

Update: It turns out that the Harding Theater was built in 1926, and is still remarkably intact inside (see here). After it ceased being a music venue in the early 1970s, it was a Church and Community Center until 2003.  The San Francisco Planning Commission declared the building an historic landmark in 2006.
Posted by Corry342 at 9:04 PM