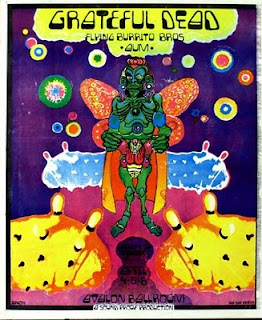 The live broadcast of the April 6, 1969 Avalon Ballroom show provided one of the best of the 1969 Grateful Dead shows that were widely circulated in the earlier days of tape trading, and it provided one of the best recorded examples of the early Flying Burrito Brothers, a much rarer commodity (as well as an AUM tape). Although I think the KPFA-fm (Berkeley) show was broadcast in mono--I'm not certain--it may be one of the earliest live remote broadcasts of a rock concert. Oddly enough, a peculiar twist in the history of California tended to obscure the fact that the Dead and Burritos shows were recorded on the same night. As a result, it is hard if not impossible to verify my assertion that the Flying Burrito Brothers were a significant catalyst for Jerry Garcia, almost certainly because of this weekend's run of concerts.

The Flying Burrito Brothers, led by co-singer/writers Gram Parsons and Chris Hillman, along with pedal steel guitarist Sneaky Pete Kleinow, bassist Chris Etheridge and drummer Michael Clarke, only released two albums in their original incarnation (1969's The Gilded Palace Of Sin and 1970's Burrito Deluxe), yet these fine but poorly sellling albums have had a huge mythology built upon them. The early death (on September 19, 1973) of the hard-living Gram Parsons has helped ingrain the myth that Parsons was at the center of everything: the myth says that he introduced the Rolling Stones to country music, transformed the Byrds (on Sweetheart Of The Rodeo), invented country rock with The Flying Burrito Brothers (who spawned the Eagles and ultimately Garth Brooks) and "discovered" Emmylou Harris. Even Parsons' death was the subject of a movie (Gram Theft Auto), and he remains a fascinating figure.

All this is true, up to a point, although John Einarson's 2008 book Hot Burritos (Jawbone Press) shows that the less flashy Chris Hillman had a considerably larger role in the Byrds and Burritos migration towards soulful country-rock than has usually been assumed. In any case, thanks to the KPFA broadcasts and the 2007 release of the double cd Gram Parsons with The Flying Burrito Brothers Live At The Avalon Ballroom 1969, we have a very good idea what the Burritos sounded like when they opened for the Dead (note, incidentally, how Gram Parsons name figures more prominently in the re-release). The cd features the Burritos complete sets, recorded by Bear himself, from April 4 and 6, 1969. Besides great songwriting, Everly Brothers-style harmonies from Hillman and Parsons and a soulful rhythm section anchored by Chris Etheridge, the revelation in the performance is the unique pedal steel playing of Sneaky Pete Kleinow.

Sneaky Pete (1934-2007) was already 34 years old by 1969, quite aged by Avalon standards. He had spent most of the 1960s working as a stop-motion animator (he was a key animator for Gumby) while playing pedal steel in bars and studios with the "Bakersfield" country music crowd. The Bakersfield sound, led by Buck Owens and Merle Haggard, rocked harder and owed considerably more to Chuck Berry and the blues than Nashville country, which was why Jerry Garcia and other rockers liked it so much. Einarson's book includes an interesting interview with guitarist Bernie Leadon (ex-Burritos and ex-Eagles) who describes the complexity of Kleinow's approach to the steel guitar.

Sneaky Pete Kleinow was one of the first genuine practitioners of "rock" pedal steel guitar--I think Poco's Rusty Young was the only other one at this time. Although Kleinow could play all the country licks as well as anyone, the Avalon tapes show that his pedal steel was the Burritos lead instrumental voice, and Kleinow took full advantage of feedback and the dynamic range of amplified music. The Burritos were singing in what could be described as a "hippie Bakersfield" style, with Kleinow's unique steel guitar riding high. It sounds great on the cd, and it must have sounded pretty awesome on the Dead's sound system. I think Jerry liked what he heard--he bought a Zane Beck pedal steel guitar in Colorado the next week.

I'm not suggesting that Garcia's interest in pedal steel guitar and Bakersfield happened in a blinding flash after hearing the opening solo on "Close Up The Honky Tonks." Garcia had owned a Fender pedal steel in 1966, but had found it difficult to set up and tune, and sold it (to Banana Levenger of The Youngbloods). Certainly the Dead had dabbled with some hard driving country music since 1966, with songs like "Silver Threads And Golden Needles," and "Beat It On Down The Line" has a kind of Buck Owens/Don Rich feel to it (I know its a rocked-up bluegrass song; that's the essence of the Bakersfield sound). In an earlier post, I pointed out how the set up of rock concerts in the day encouraged bands to hear their opening acts (they didn't have much choice), and as a result Garcia was drawn to the sounds of Pentangle, who opened for the Dead at Fillmore West the month before.

Nevertheless, I'm convinced that Garcia's ears opened wide to the possibility of rock and roll pedal steel after he heard Sneaky Pete live, and when a chance to buy a pedal steel presented itself in Colorado, he jumped at it. I think Garcia's experiments with playing pedal steel live with the Dead in June 1969, particularly on seemingly inappropriate songs like "Hard To Handle" was an attempt to try on Sneaky's approach. Kleinow could have soloed on "Hard To Handle," but Garcia lacked the technique, having only played for a few months. The presence of John Dawson and his batch of newly-written songs in turn gave Garcia an outlet to work in a Burritos-like setting.

I think what Garcia got from Sneaky Pete and The Flying Burrito Brothers was a sound, and he heard the possibilities of the sound. He could have played electric guitar or banjo with Dawson, and that would have sounded great, too, but I think the sound of an amplified pedal steel on a huge  system flipped a switch in Garcia's ear, and made a passive curiosity about the instrument an urgent need. I'm sure if the Grateful Dead had been booked with Poco, and Garcia had heard Rusty Young, the same thing might have happened, but I'm convinced it was the Burrito show this weekend that re-activated Garcia's interest.

The long history of 20th century competition between San Francisco and Los Angeles was at its worst in the sixties, and while I don't think it affected the musicians themselves, many writers and partisans for the next twenty years or so rarely considered the history of Los Angeles and San Francisco bands relative to each other, so no one ever seems to have asked Garcia about the Burritos. While matters have improved (once Los Angeles gave back the Oakland Raiders, it was clear they were ascendant), and West Coast music is now seen more correctly as part of a whole, the habit of dividing the state has left the Burritos/Garcia connection unexplored.

The Avalon Ballroom
The Avalon Ballroom, at 1268 Sutter (next to the Masonic Temple at 1290 Sutter), had been the home court for Chet Helms and the Family Dog from 1966-1968, yet despite the many legendary performances there the Dog ran into financial difficulty and gave up the lease on the Avalon. In early 1969 other promoters (under the name Soundproof) took over the Avalon and presented a series of shows in the Winter and Spring. All the San Francisco bands loved the Avalon, the Dead in particular, and some fine music was made, but this venture too ended unhappily. As far as I know, these Dead/Burritos/Aum shows in April 1969 were the last rock shows at the Avalon Ballroom for about 35 years.

The Flying Burrito Brothers
The Flying Burrito Brothers were a wonderful, important band, but the original group only released two albums, neither of which sold well, and yet there are more books about them than most bands with many more albums. Gram Parsons and Chris Hillman had been in The Byrds for the album Sweetheart Of The Rodeo (in 1968) and left, forming a songwriting and singing partnership that was a unique blend of the Everly Brothers, Buck Owens and Bob Dylan, and they formed a band that merged country, soul and rock and roll. Bassist Chris Etheridge provided a soulful bottom (distinct from the country sound extant at the time), and the groundbreaking pedal steel guitarist Sneaky Pete Kleinow was the principal instrumental voice. They used various drummers in the studio, finally settling on ex-Byrds drummer Michael Clarke as a permanent member.

Gram Parsons (1946-73) only released five albums while he was alive, as part of the International Submarine Band (Safe At Home-1968), The Byrds (Sweetheart Of The Rodeo-1968) and The Flying Burrito Brothers (1969's debut album The Gilded Palace Of Sin and 1970's Burrito Deluxe) and his two solo albums (1973's GP and the posthumous 1974 Grievous Angel). A  number of live and studio demo recordings were released after his death. Nonetheless, Parsons has earned a reputation as a catalyst--introducing the Rolling Stones to country music, transforming the Byrds into a country-rock band, inventing a hybrid "country-rock" sound with the Flying Burrito Brothers which eventually spawned the Eagles, and laying the groundwork for alt-country as a duo with Emmylou Harris. The charismatic yet troubled Parsons also undermined every personal and musical relationship he ever had, dying under mysterious circumstances on September 19, 1973 (this spawned a movie, called Gram Theft Auto, based on road manager Phil Kaufman's book Road Mangler Deluxe).

Writer John Einarson has reconsidered the Gram Parsons legacy with the Flying Burrito Brothers, making a persuasive case in his 2007 book Burrito Deluxe (Jawbone) that Burrito co-founder Chris Hillman deserves much of the credit for the Burritos musical success, just as the underrated Hillman had done for The Byrds, Manassas and Desert Rose Band. Einarson makes the point that the early, legendary Burritos played very few live shows, and what few they played tended to be very sloppy. Kleinow's work as an animator initially discouraged the band from live work, and the erratic Parsons wasn't fond of rehearsal. They also had difficulty finding a permanent drummer until Michael Clarke came on board. Their debut album had probably just been released when they played The Avalon, and the fine recording and relatively disciplined performances suggest that this was a rare weekend indeed for the band.
Posted by Corry342 at 2:45 PM