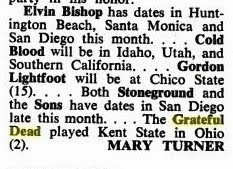 A correspondent forwards the fascinating information that the Grateful Dead appear to have played a gig at Kent State University in Kent, OH on Friday, April 2, 1971. The listing (above) comes from the cache of Billboard magazines accessible on Google Books. It is from the Talent section of the April 10, 1971 edition (p.21), in the San Francisco portion of News From Music Capitals Around The World. Many of the notes from correspondent Mary Turner refer to San Francisco based bands, rather than just events in San Francisco itself. I know of no other reference to this date for a Grateful Dead performance, so this may be a lost date.

Did The Grateful Dead Play Kent State On April 2, 1971?
As all American periodicals are forward dated (because of Second Class Mail rates), the press deadline for this issue of Billboard seems to have been about April 1. Most of the concert reviews are from March, and the latest is March 30. There is one news item that refers to a club (Ungano's in New York City) being closed April 1. This leads me to think that Mary Turner was reporting on a scheduled show, but that she did not know for a fact if it occurred. That being said, most canceled shows are canceled some time in advance, so there's no inherent reason to assume that the show was canceled.

April 2, 1971 was a Friday. The Grateful Dead were on their way to New York to play three nights at Manhattan Center on April 4-5-6, to begin an extensive East Coast tour, mostly of colleges. Although the Dead were already world famous by 1971, they were still in a precarious financial situation, so they made a point of playing as many gigs as possible. Two things make the Kent State gig seem very plausible:


Kent, OH
Kent State University is a substantial University. While generally in the shadow of Ohio State, and remembered today for the terrible tragedy of May 4, 1970 (when National Guardsmen killed 4 students during an Anti-Vietnam War protest, memorialized in the Neil Young song "Ohio"), Kent State was a large college town with a lively music and arts scene. The most famous musician to come out of Kent was Joe Walsh--today most people are only familiar with Joe Walsh because of his 1970s solo work and his membership in the Eagles, but his 60s band The James Gang were badass indeed (Pete Townshend said that Joe Walsh was his favorite American guitarist).

There were signs of life in early 1970s Ohio as well. Art student Chrissie Hynde was in a band with a future member of Devo (Mark Mothersbaugh), and despite the tragedy of 1970 Kent State was an interesting place to be in the Midwest. Certainly a Grateful Dead concert would have been well attended there, just as much as a concert would be in smaller places on the tour (like Bucknell or SUNY Cortland).

The most likely venue would seem to have been the MAC Center (also known as Memorial Gym). Built originally in 1950, and renovated a number of times,  the venue currently seats about 6,200 in basketball configuration. I don't know how much (or if) that is different than the 1971 configuration.

Conclusions
Although the Billboard listing for a Grateful Dead concert at Kent State on April 2, 1971 probably refers to a scheduled gig that may or may not have happened, the event definitely falls into the realm of the plausible.


Legislating against this remains the fact that no poster, ad, tape, ticket stub or memory of a 1971 Grateful Dead show at Kent State seems to have endured. It would be very interesting to hear from someone in the Greater Akron Metropolitan Area about any memories about whether this event occurred or not.
Posted by Corry342 at 7:21 PM