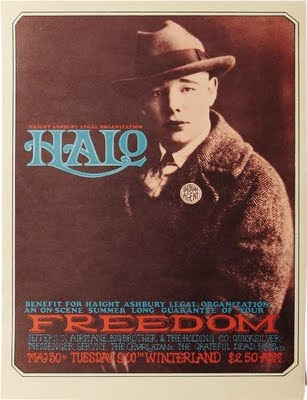 One of the foundations of rock prosopography has been looking at famous old posters to determine which bands played at which events. One famous poster (above) is for this concert

By May 1967, the underground bands of the year before were rising stars. The Jefferson Airplane's second album (Surrealistic Pillow) was a hit, The Grateful Dead had released their debut on Warner Brothers, and Big Brother had released some singles and recorded enough for an album, although it would not be released until somewhat later. Quicksilver Messenger Service were popular Fillmore headliners who had hitherto refused to sign a record contract. Only The Charlatans, in some ways responsible for founding the scene, had not found new success. The HALO concert (as its now known) was an increasingly rare event where all the bands who regularly headlined at the Fillmore and Avalon shared a bill together, just as they might have done the previous year. Winterland (capacity 5,400) was far larger than the Fillmore, and probably all the star power was needed to sell that many tickets. It was the Tuesday after Memorial Day, so bands did not have competing gigs.


The chronologies of all four of the major bands list the HALO concert on the basis of the poster. The only problem with that analysis is that we can only be certain Quicksilver Messenger Service actually played, and I am fairly certain that one or two of the bands didn't play at all. I am unable to determine which ones those might be, however, so I will speculate on the evidence here. Although it is impossible to say for certain, there are plausible reasons to think that the Grateful Dead were the ones who did not play the show.I am not aware of a review or eyewitness account of the show that positively confirms which bands played.


The Quicksilver Messenger Service set was broadcast on San Francisco's (and the world's) first underground rock station, KMPX-fm, probably on a tape-delayed basis. This may be the first live FM broadcast of a rock concert, an interesting subject in its own right, but not my focus here. As a result of the broadcast, we are fortunate to have a pretty good quality circulating tape (for 1967) of Quicksilver's opening set. KMPX founder Tom Donahue introduces the band by saying "We're going to do it in six sets tonight, all three bands will play twice." He also cryptically refers to a "mystery guest, imported from a far-off land." Donahue's introduction begs the question--who didn't play?

Quicksilver seems to be opening the show, and the entirety of Donahue's remarks seem to be preserved. Its always possible that another MC explained the running order prior to the set, and Donahue is just speaking of specific groups, but he does say "all three bands will be playing twice," not "these three bands" or some phrase that suggests there are other groups. At the time, it was expected at the Fillmore and Avalon that ever act would rotate through twice: the opening band played 1st and 4th, the headliner 3rd and 6th, and so on, so Donahue's remark would have been understood in that context.

We know Quicksilver played, so let's consider the likelihood of the other groups failing to make the show.

The Charlatans
The Charlatans were the least popular of the groups at this show, by a wide margin, so if they were no-shows that would have had the least impact on attendance. Anyone who wanted to see the Charlatans would still be happy to see the rest of the bands, so they could be dropped without fanfare. On the other hand, the perpetually struggling Charlatans needed the gig the most, and were most likely to be free on a Tuesday night, so they are also less likely than the other groups to have had conflicts.

It was not unheard of at the Fillmore to have an "opening act," usually one not on the poster, that would play an a set prior to the tripartite rotation of the headliners (this would mean that the final act would appear both 4th and 7th). Its plausible that the Charlatans played an opening set and did not repeat, so Donahue's reference to "all three bands" implicitly excluded the Charlatans. I think this is the most likely explanation: the Charlatans played a set, and an announcer explained that someone wasn't playing, so that when Tom Donahue said "all three bands" it was understood who that was. It remains to be discussed who that might have been.

Jefferson Airplane
The Airplane had actually been on tour. They had just spent the weekend in the Pacific Northwest, headlining at the Seattle Center Arena on Monday, May 29 (Memorial Day). The Airplane would have had to fly in with their gear to go to Winterland, and might have been delayed. On the other hand, its a short flight from Seattle, and the Airplane were experienced at touring by this time. Its important also to remember that the Airplane were real rock stars at this point, with hit singles, and a considerably bigger draw than any of the other groups. If the Airplane were not playing, it would have had a considerable effect on ticket sale. Given the relative size of Winterland, the finances of the show probably depended a lot on walk-up sales, so a sudden Airplane cancellation would have had the most significant effect on the gate.

There is apparently a circulating Airplane tape dated "May 29, 1967 Winterland," which I have not heard. I have no way of knowing whether this is mislabeled by location (on May 29 the Airplane were in Seattle) or date. We do know that part or all of the show was taped, because of the Quicksilver tape, so its plausible that its a misdated tape of the Airplane HALO set.

Big Brother and The Holding Company
Big Brother were in town and had no other conflicts. This doesn't rule out the possibility of someone getting sick or other problems, but there was no inherent conflict. No tape circulates that I know about.

The Grateful Dead
The Grateful Dead had not played live (per Deadlists) since Saturday, May 20. However, the Dead were about to embark on their first Eastern tour. They not only began a run at Greenwich Village's Cafe Au-Go-Go on June 1 (through June 10), but they apparently introduced themselves to New York by playing for free in Tompkins Square Park in the East Village (on E. 9th St and Avenue A) on June 1 as well. Thus while the Dead had agreed to play a benefit on a Tuesday night, they were playing live in New York City just 36 hours later.

Bands traveled with considerably less equipment in the 1960s than they do now, and the Dead certainly could have flown to New York on Wednesday (May 31) in order to play Thursday. However, unlike Big Brother and The Airplane, the Dead were gearing up to leave, and that increases the likelihood that some member or piece of equipment was not available for the Winterland show. Although the Dead were a popular local group, they were not nearly as popular as the Airplane, and arguably not as popular as Big Brother or Quicksilver either, so their unexpected absence from the bill would not have been as significant to the walk-up sales.

The Grateful Dead had the closest relationship to the actual Haight Ashbury Legal Organization (see below), but as a result they had also done the most for the organization, so they could beg off and make it up later if they needed to.

Paradoxically, the other plausible argument for the Dead not playing the HALO Benefit is the absence of a tape. We know there was taping equipment there, because of the Quicksilver broadcast. There at least appears to be a circulating Airplane tape. There is no Big Brother tape, but while a few Big Brother tapes circulate, neither the band nor their management made a concerted effort to accumulate and store live tapes (more's the pity). The Dead, on the other hand, were archivists from the beginning. If there was recording equipment, the Dead would have used it and would have preserved the tape. Its possible, of course, that the Dead have been squirreling one away all these years, but I doubt it. While not all stored Dead tapes have been heard publicly, most of the old ones are at least documented.

Five bands were booked at the HALO Benefit, but a surviving Quicksilver tape has Tom Donahue saying "all three bands will play twice." Best guess scenarios:

While the performance of any band at the HALO Benefit other than Quicksilver has to be treated as "unconfirmed," I feel that existing evidence points towards the Grateful Dead as the most likely of the no-shows. Anyone with other evidence or theories should post them in Commentsor email me.


Appendix 1: "Mystery Guest, imported from a Far Off Land"
At the beginning of the Quicksilver tape, Donahue says "all three bands will play twice...and we also have a mystery guest, imported from a far-off land." Since we have no eyewitnesses or reviews (to my knowledge), its impossible to know who this might have been. I will say that being familiar with Tom Donahue's laconic humor from KSAN-fm, the "far off land" was most likely Los Angeles. Assuming that the mystery guest was a musician, as Donahue's introduction implies, and not an actor or public figure, this suggests a brief acoustic set by someone. This hypothesis makes sense particularly if we assume one of the headliners didn't play, as the Mystery Guest would have been a "makeup."

You can speculate for yourself on the mystery guest. Just to pick a name out of thin air, I will note that the Airplane were playing in Seattle with The Byrds, and David Crosby was friends with all the bands, and he would have been an enthusiastic supporter of HALO, but of course its impossible to say without new information.

Appendix 2: The Haight Ashbury Legal Organization
The Haight Ashbury Legal Organization (HALO) was run by two young laywers, Michael Stepanian and Brian Rohan, and their focus was on providing representation for hippies who had been busted for marijuana. Rohan and Stepanian were very effective at throwing out arrests by overzealous cops, and often represented people for free (grateful parents probably paid for the rest). HALO was run out of 715 Ashbury, across the street from the Grateful Dead's house at 710 Ashbury. Don McCoy and other friends of the Dead lived at 715, and its no coincidence that Brian Rohan represented the Grateful Dead (Stepanian ended up representing Hunter Thompson, but that too is another story). With the Summer of Love coming on strong, HALO correctly expected that many naive out-of-towners were at risk for being rousted by the cops, so the San Francisco groups banded together for a benefit to fund HALO for the Summer.