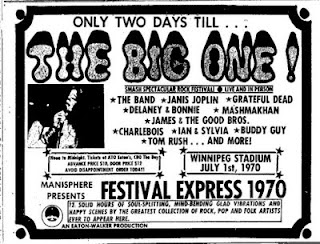 The Grateful Dead's participation in the cross-Canadian train trip known as Festival Express is well known from the movie of the same name and the song "Might As Well" which memorialized the party.

However, I came across this newspaper ad for the Winnipeg show from the June 29, 1970 edition of the Winnipeg Free Press (which was the local daily, not an underground weekly). I know of no other poster or ad for the show, so I thought I would post it for those interested in completeness.

Some notes on the Canadian groups (other than The Band, of course):

Mashmakhan was a popular Toronto band who had a well-known song called As The Years Go By off their Columbia debut album. Apparently there is footage of Mashmakhan performing in the Festival Express movie.

James And The Good Brothers later moved to the Bay Area, and Jerry Garcia and Jack Casady performed with them at Fillmore West in February 1971.

Ian and Sylvia Tyson were a Canadian folk duo who had started playing country rock music around 1968. Their pedal steel guitar player was Buddy Cage, who met Jerry Garcia and The New Riders of The Purple Sage on the train, and subsequently joined the Riders. Cage, Garcia and others join Ian and Sylvia and others for a closing night jam from the Calgary show in the movie.

Note that the New Riders Of The Purple Sage are not mentioned in the ad. At the time, they had no album, and had only performed live with the Dead, mostly on the East and West Coast.
Posted by Corry342 at 3:44 PM