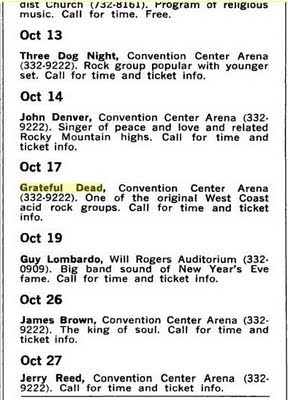 A correspondent sends a listing (above) from the Texas Monthy of October, 1973, available through Google Books. There is a tantalizing listing for a Grateful Dead show on Wednesday, October 17 at the Tarrant County Convention Center in Forth Worth, TX, just three days after John Denver and two days before Guy Lombardo (note: when I initially posted this, I thought the venue was the Dallas Convention Center, but alert commenters have proved otherwise, and I changed the post accordingly. The general points still hold, however).

The Fall 1973 Grateful Dead tour is generally known to have begun at the Oklahoma City Fairgrounds Arena on Friday October 19. This show, featuring an epic "Dark Star," was released as Dicks Picks 19. Nothing would make me happier to know that there was a show before that, since every note the Dead played in 1973 was gold as far as I am concerned, and I hope there is another one out there. It certainly fits the touring schedule, where there were two day gaps between cities (Omaha was October 21, Bloomington October 23, Madison October 25 and so on).

However, much as I want there to be another show on the Fall 1973 tour, I have to fall on the side of believing it didn't happen. If a Fort Worth show on October 17 didn't happen, then the tour simply started two days later, a very different scenario than leaving an empty date in the middle of the tour. While the Dead were always admirable in their willingness to invade new territory, I am not surprised to find that they did not play the Fort Worth Convention Center.

The Tarrant County Convention Center, now the Fort Worth Convention Center, features an 11,000+ capacity arena. Strange as it may seem to modern Deadheads, despite their legendary status the Grateful Dead were not at all a big draw outside of the two Coasts and some Midwestern strongholds for many decades. I find it an unlikely proposition that the Dead could fill an 11,000 seater in Dallas/Fort Worth in the 1970s. While even in the 1970s Deadheads were famous for traveling a long way for shows, Dallas was a long way from New Jersey or San Francisco, and Texas itself was a forbidding place for longhairs in the 1970s (Austin perhaps excluded).

Nonetheless, an alert commenter pointed out that there is an extant handbill for the show: 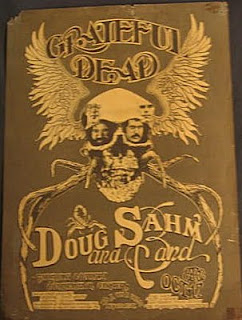 The discovery of this flyer (h/t Psyclops) suggests that the plans for this show were a lot farther along than merely a listing in some monthly magazine. While most shows after 1971 are taped, it was not unheard of for shows to lack a circulating tape, and Texas was far from the circle of regular tapers, so while the lack of a tape or review points away from this show having occurred, its not completely out of the question.

Although I retain hope that another 1973 tape lies in wait, I have to assume that this show was booked to open the Dead's Fall Tour and quietly canceled when ticket sales did not live up to expectations. Dallas is a big city, but a glance at the other acts in October gives a hint to entertainment in Dallas. Three Dog Night (October 13), John Denver (October 14) and James Brown (October 26) were all huge acts with hit singles on the charts and substantial track records behind them. Jerry Reed (October 27) was a big country star, and while he is in fact a fine guitarist and an excellent performer, it is telling that a Nashville star (with an occasional crossover hit like "Polk Salad Annie") was playing the same venue as multi-platinum stars Three Dog Night.
Posted by Corry342 at 8:06 PM