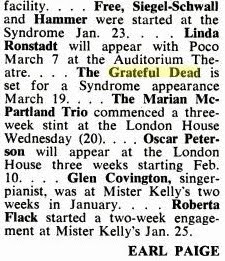 The February 6, 1971 Billboard mentions in its "News From The Music Capitals Of The World" for Chicago that the Grateful Dead are scheduled to play The Syndrome on March 19. There is indeed a blank spot on the Dead's Spring tour for Friday, March 19, between the Fox Theater in St. Louis (Thursday March 18) and the University of Iowa Fieldhouse (Saturday, March 20), but no sign of a Chicago show. The reason for this is simple: the April 10, 1971 edition of Billboard remarks on the abrupt closure of The Syndrome. It seems clear that the Dead had a gig booked there, and when the venue closed the band was simply stuck with an open date.

Not surprisingly, Chicago had a huge rock market, but various efforts to establish a Fillmore type venue were not successful. One such effort was The Syndrome. The site of The Syndrome was actually the Chicago Coliseum on Wabash Avenue (between 14th and 16th Streets). The Coliseum, actually the second building with that name, was built in 1899 and mostly housed sports teams, including the Chicago Blackhawks (NHL 1926-29), Roller Derby and the Chicago Packers (NBA 1962-63, they moved to Baltimore and became the Bullets). Starting in the late 1960s, it was used periodically for rock concerts. The capacity of the room for basketball was about 7,000. I do not know the rock concert capacity, but I have been told that Chicago promoters had a tendency to pack in as many people as humanly possible, since any fire or other building codes that were being violated could be overlooked for a modest consideration.

The venue had been used for rock concerts under the name Chicago Coliseum in the 1960s, generally for acts too large to play the Kinetic Playground or Auditorium Theater, Chicago's main rock venues. Cream played there on October 13, 1968, and Jimi Hendrix Experience played there on December 1, 1968. The venue became known as The Syndrome sometime in 1970. The promoters seem to have been The 22nd Century, and put on shows at both the Syndrome and the smaller, seated Auditorium Theater. The Dead played there on Friday, November 27, 1970. Since The Syndrome probably held at least 7,000, it was considerably larger than the usual venues that the Dead played in during the early 1970s.

Things must have gone well enough to be re-booked, but The Syndrome closed in early March. The building remained largely unused afterwards, and was torn down in 1982. Coliseum Park, at 1400 Wabash, stands on the site today.
Posted by Corry342 at 4:20 PM