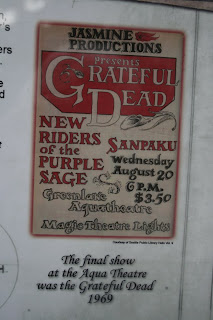 Earlier I wrote about the Grateful Dead's appearance at the Greenlake Aquatheatre in Seattle in August 1969. This event, originally scheduled for Wednesday, August 20, was rained out and rescheduled for Thursday, August 21. The Grateful Dead and the other acts on the bill took the night of August 20 to make a suprise appearance at a local bar, which intrepid research revealed to be a place called El Roach at 5419 Ballard Avenue.

The Aquatheatre show was interesting for any number of reasons, including the guest appearance of Sanpaku flautist Gary Larkey, the fact that it was the last performance at the Aquatheatre, and the peculiar physical setup of the Aquatheatre itself. Thanks to the intrepid photojournalism of blog reader Ron, we have been provided with some remarkable contemporary photos of the site. The site of the old Aquatheatre (5900 W. Green Lake Way N, Seattle, WA 98103) is now a public park, and Ron took some fantastic photos which he shared with me.

The Grateful Dead advertisement above is from the Seattle underground paper The Helix. It is a framed display at the site, which also includes information about a legendary Led Zeppelin show earlier that year. This poster is interesting not least because it may be the first formal publicity for the New Riders Of The Purple Sage. Their name had definitely not appeared on a poster or ad outside of San Francisco at this time, and may not have appeared in the Bay Area either (we are still working on that detail). 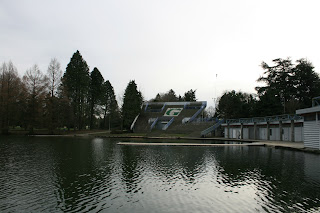 This photo by Ron shows a piece of the grandstand. The performers played on an extended sort of "pier,' separated by a small body of water, facing the grandstand. 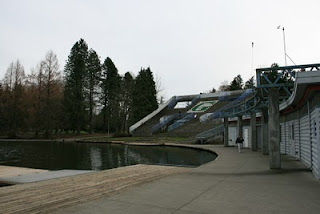 Here is another view. I think the performers played on the pier peeling off to the left of the photo. The grandstands were considerably larger, as the venue had 5582 seats, but even now these photos give an interesting perspective on the long gone Aquatheatre. Many Deadheads have seen the band in numerous venues, but inevitably they tend to be a laundry list of municipal auditoriums, "sheds" (like Shoreline Amphitheatre) and converted movie theatres. I cannot say if the Grateful Dead ever played another venue where they backed onto a lake and had water between themselves and the audience, but if they did I don't know about it. Every Grateful Dead show was different in its own right, but this one had to have been a lot more different than most of them.

Update
For those who have been following the saga of these two days in Seattle, Ron has also provided great current photos of the site of El Roach at 5419 Ballard Avenue, where the Dead played a surprise Wednesday night gig as a result of the Aquatheatre rainout. For those photos, see the bottom of the post here.

Thanks once again to Ron for his amazing photos.
Posted by Corry342 at 6:17 PM