I have had a number of posts about Grateful Dead shows in the Spring of 1967, and I thought I would summarize them, both as a navigational guide and in order to make a few points. What follows is a list of known or possible Grateful Dead performances from January to April 1967. Previously established gigs can be analyzed in Deadlists or elsewhere, and stand without comment (I have linked to existing posters where possible). Any remarks I have are usually in addition to the relevant posts, which I have linked to.

The general focus of this list is on the idea that the Dead, while underground legends, were living hand to mouth and looking for gigs. At the same time, almost all gigs were still on weekends, so my analytical goal is to try and fill in gaps on Fridays and Saturdays. Any insights, knowledge or corrections are eagerly welcomed.

January 6, 1967 Freeborn Hall, UC Davis Grateful Dead/Big Mama Thornton
This was a Friday night show, probably a Winter Quarter "kickoff" dance at UC Davis. Normally I would look for a corresponding Saturday night gig, but this near to New Year's there may have been nothing much going on in the Bay Area.

January 20, 1967 Santa Monica Civic Auditorium, Santa Monica Grateful Dead
It is surprising to see a Friday night (20) gig without a corresponding Saturday gig, but I am assuming that they were in Los Angeles to work on their album and their schedule may have been different. This was also an odd event because the Dead played on the same bill with Timothy Leary, and at least some of the time probably jammed while he gave a dull speech. Given the peculiarity of this event, I don't think this falls into the normal touring pattern, so I'm not assuming a Saturday night (21) Southern California show, although its still possible.

February 5, 1967 Fillmore Auditorium, San Francisco Benefit for the US Strike Committee
Jefferson Airplane/Quicksilver Messenger Service/Dino Valente/New Delhi River Band/Loading Zone/Country Joe and The Fish/Grateful Dead
This possible show was a new discovery. Ralph Gleason's February 3, 1967 Chronicle column lists the performers at the Sunday night benefit and says that the Grateful Dead will join them "if they're back recording from L.A." [not on Deadlists]

February 10, 1967 Santa Venetia Armory, San Rafael Grateful Dead/Blue House Basement/Baltimore Steam Packet
The Sopwith Camel were originally scheduled to play this Friday night Ralph and Al Pepe production at the Armory. However, the Camel ended up having East Coast obligations and the Dead took their place.

It may be that the Dead did not want to commit to gigs in case they were not finished recording, but after the speed with which they recorded the first album they were then free to look for gigs. With that in mind, I am looking around for a possible gig on Saturday night (February 11), most likely outside of San Francisco in a place like Merced or Stockton.

I am looking for possible gigs on Friday and Saturday, February 17-18.

March 3, 1967 Winterland, San Francisco The First Annual Love Circus
Grateful Dead/Moby Grape/Loading Zone/Blue Crumb Truck Factory
This controversial gig took place on a Friday night, and I am looking for a Saturday night (March 4) gig outside of San Francisco. I talk about some of the issues surrounding it here.

March 5, 1967 Avalon Ballroom, San Francisco Moby Grape/Country Joe and The Fish/Big Brother and The Holding Company/The Sparrow/The Grateful Dead
This was a benefit for the Straight Theater. The poster (by B. Kliban) is well known, but per the San Francisco Chronicle, the Dead seem to have been added at the last minute. [not on Deadlists] 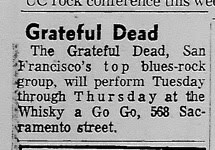 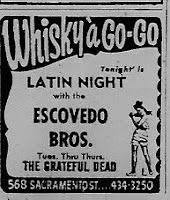 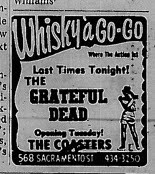 March 10-12, 14-15, 1967 Whiskey A Go Go, San Francisco Grateful Dead
I have written at length about this obscure satellite of the famed West Hollywood Whisky A Go Go, and I wrote about whether or not the Dead played there. At that time I felt they likely did not play, but I have since revised my opinion and think they played the shows. I will publish all this later--for now I think we can book the Dead as having played the San Francisco Whisky on March 10-12 (Friday-Sunday) and March 14-15 (Tuesday-Wednesday).

The tiny article and the first ad (mentioning the Escovedo Brothers) are from the Monday, March 13 SF Chronicle; the last ad (mentioning the Coasters) is from the Wednesday, March 15. Although there is an inherent contradiction over which day the Dead ended, and its possible that the "Last Times Tonight" is a misprint (note the grammatical inaccuracy), and the band closed Thursday, for now I will assume the Dead closed out their Whisky gig on Wednesday March 15.

March 20, 1967 Fugazi Hall, San Francisco 'The Grateful Dead'Album Release Party
The Dead played their Warner Brothers album release party at a tiny North Beach hall on 678 Green Street on a Monday night. They only played a few numbers before they lost power. This was a known event (it appears in The Illustrated Trip ) but it wasn't known until now if the band played.

March 24-25, 1967 Avalon Ballroom, San Francisco Grateful Dead/Johnny Hammond and His Screaming Nighthawks/Robert Baker
March 26, 1967 Avalon Ballroom, San Francisco The Grateful Dead/Quicksilver Messenger Service/Johnny Hammond and His Screaming Nighthawks/Robert Baker
This well known event does not appear in Deadlists, but it appears in other chronologies, so it seems to just be an oversight. On Sunday night, Eric Burdon and The Animals showed up and played a few numbers on the Grateful Dead's equipment.

March 26, 1967 Griffith Park, Los Angeles "Love-In"
There was an outdoor Be-In at Griffith Park, and some sources place the Grateful Dead there, while others do not, and still others recall nothing whatsoever. The band would have had to fly to LA, play the gig, and fly home to the Avalon, but with SF/LA airline tickets only about $19 one-way (not a lot of money even then) its well within the realm of the possible. 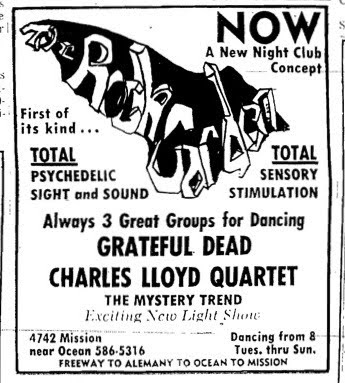 March 28-April 2, 1967 The Rock Garden, San Francisco Grateful Dead/Charles Lloyd Quartet/Mystery Trend
I have found out more about this mysterious venue, which I will write about in Rock Prosopography,  but not much more about the Grateful Dead's performance. The short version is that a Prankster persuaded a successful North Beach operator to open a rock club on the Southern edge of the City, but the venue was too far from both the Haight Ashbury and the suburbs, and at the time psychedelic bands drew more of an underage crowd, so the bar was more of a hindrance than a source of revenue (hence the adage "Never Trust A Prankster').

Charles Perry (in his book Haight Ashbury: A History) lists the Dead as playing the Panhandle on this Sunday afternoon. [not on Deadlists]

April 9, 1967 Longshoreman's Hall, San Francisco Week Of The Angry Arts West
Grateful Dead/Quicksilver Messenger Service/Sopwith Camel/Country Joe and The Fish/Big Brother and The Holding Company
"Spring Mobilization To End The War In Vietnam/Benefit Dance"
The poster for this event is well-known, but does not include the Grateful Dead. Ralph Gleason reported that they were scheduled to perform. That's not a guarantee they did in fact perform, but its at least a likely possibility [not on Deadlists]

April 14-15-16, 1967 The Kaleidoscope, Hollywood Jefferson Airplane/Grateful Dead/Canned Heat
The Kaleidoscope was a venture by Canned Heat's managers (Skip Taylor and John Hartmann) to open a Fillmore-style venue in Los Angeles. This original weekend was supposed to be at a building on 1228 Vine Street, but a last second injunction stopped the show.

For the weekend the show was moved to the Embassy Ballroom in the Ambassador Hotel, at 3400 Wilshire, which also housed the legendary Coconut Grove Ballroom. The Kaleidoscope then had a few gigs at Ciro's (at 8433 Sunset Blvd, now The Comedy Store), and reopened in 1968 at 6230 Sunset Blvd (yet another story). [not on Deadlists, but a known date]

April 17, 1967 Banana Grove at The Ambassador Hotel, Los Angeles Grateful Dead
The Banana Grove was the nickname for the Embassy Ballroom at the Ambassador Hotel. Why did the Dead play a Monday night after playing the whole weekend? I have to assume this was a Warner Bros album release party, similar to the March 20 event at Fugazi Hall in San Francisco, also on a Monday. [not on Deadlists]

April 28, 1967 Stockton Ballroom, Stockton, CA Grateful Dead
Historically there has been some doubt about this show because there were questions about the provenance of the circulating poster. While I am unqualified to comment on the history of the poster, a recently discovered quote from Jerry Garcia suggests that the Dead did indeed play Stockton on this Friday night.

Ralph Gleason has a column on Sunday, May 14 Chronicle (above) about the rising popularity of San Francisco rock bands across the nation. Garcia is definitely referring to the Saturday show in Santa Barbara (below), and the context suggests they played Stockton that weekend as well, so I am following my own premises and asserting that the band filled their Friday night with a gig in Stockton.

There is a modest amount of information about the Stockton scene, such as it was, on the Brotherhood Of Light website. Assuming that the current Stockton Ballroom is the same as the old one, the address would be 9650 Thornton Road, Stockton, CA 95209 [not on Deadlists]

April 30, 1967 The Cheetah, Santa Monica Grateful Dead/Yellow Balloon/New Generation
There were two shows at 3:00 and 8:00 pm (it was a Sunday). The Cheetah was part of a sort of chain of Cheetahs which included venues in Chicago and Manhattan. The Santa Monica Cheetah was the former Aragon Ballroom, at 1 Navy Pier on the water. [not on Deadlists, but a known date]

As I learn more information, I hope to update and re-publish this post periodically. The current "open" dates where I am fishing for possible gigs are
I do not think every one of these dates has a gig, but I'll bet some of them do. Open dates in January and early February can be presumed to have been taken up with recording-related activity, but otherwise the band had to work to survive.

In the meantime, please put any insights, thoughts or corrections into the Comments.