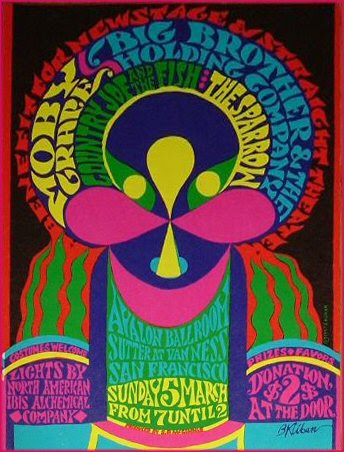 The March 5, 1967 poster for a Benefit at The Avalon Ballroom is well-known. It was not a Family Dog show, but the poster advertises a Benefit Concert with Moby Grape, Big Brother and The Holding Company, Country Joe and The Fish and The Sparrow. All of these groups were popular bands in the San Francisco Underground, and quite legendary now (The Sparrow, then living in Sausalito, would move to Los Angeles in June and transform into Steppenwolf). The benefit was for "New Stage and The Straight Theatre." The Straight Theatre was a converted movie theater at 1702 Haight Street, which various community members were trying to convert into an Avalon/Fillmore type venue, with much resistance from the City. It is a credit to Chet Helms, whatever his complex motives may have been, that he allowed his own venue (The Avalon) and band (Big Brother) to be used for a benefit to help create a competitor.

Since much of the audience for the Fillmore and the Avalon actually came from the Haight-Ashbury, to some extent the Straight Theater was seen as a community resource--I think that is what "Newstage" referred to. Nonetheless, there was an extensive struggle to get the venue a Dance Hall Permit to allow concerts to be held, so it was unquestionably conceived as a competitor to the Fillmore and the Avalon. Its remarkable that Helms was so willing to help; perhaps he had designs on the space himself. In any case, at this time, with public events not permitted, it was used as a rehearsal hall by a group called The Outfit. Later in the Spring--I am not sure of the exact date--the Grateful Dead moved their rehearsal hall from Sausalito Heliport to the Straight. They only rehearsed there for a few months, before moving again to the Potrero Theatre (on 308 Potrero).

The poster for the Straight Benefit is well known because it was created by B. Kliban, who became extremely well known in later years. However, up until now, like everyone else, I have assumed that 4 legendary Bay Area bands--Big Brother, Moby Grape, Country Joe and The Fish and The Sparrow--were enough. But apparently not, since the February 28, 1967 San Francisco Chronicle (above) includes a brief notice, certainly from a press release, that the Grateful Dead and poet Michael McClure would be special guests at the event.

The Grateful Dead were in town, because they played a show at Winterland on Friday, March 3, 1967. They had played a previous Straight Theater benefit on May 19, 1966 and in any case it became their rehearsal hall, so its not surprising to see them onboard.
Posted by Corry342 at 8:55 PM