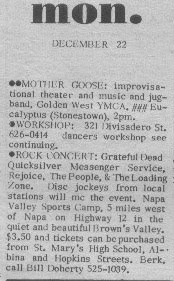 The "Scenedrome' entertainment listings of the December 19, 1969 Berkeley Barb yielded the unexpected information that the Grateful Dead would headline a benefit concert on Monday, December 22 in  the Napa Valley. In its entirety the listing says


You now know as much as I do.

The Dead would have played The Old Fillmore on December 19, 20 and 21 (Friday, Saturday and Sunday), and did not have a gig until Texas on December 26. While non-Californians may wonder at an apparently outdoor concert on a Monday in December, remember that many people are on holiday during Christmas, and daytime winter temperatures are about, oh, 65 degrees or so. This show would be very plausible in terms of the Grateful Dead touring schedule as known.

As near as I can tell, the location would have been in between Napa and Sonoma, probably around the current location of the Domaine Carneros Winery. In those days, Napa was fairly rural and agricultural, so while hippies may not have been entirely welcome, they would have been mainly only bothering cows.

What is particularly rare about this show is that it may represent a 1969 show by Quicksilver Messenger Service. There is no good Quicksilver tour history on the Web yet (I haven't gotten to it), but this would be only the 8th known show of 1969. The band definitely included John Cipollina, Nicky Hopkins, David Freiberg and Greg Elmore. Dan Healy occasionally played guitar and bass on stage with them during this period. Gary Duncan and Dino Valenti would rejoin the group on New Year's Eve, though perhaps they used this as a warmup gig. Their album Shady Grove had just been released in November.

The People were probably the San Jose band, although I'm surprised they were still together. Rejoice is a common band from bills at the time, and The Loading Zone were old friends from the early days of The Fillmore.

As to what this was a benefit for, or any other details, I am counting on the magic of the Internet.
Posted by Corry342 at 7:32 PM