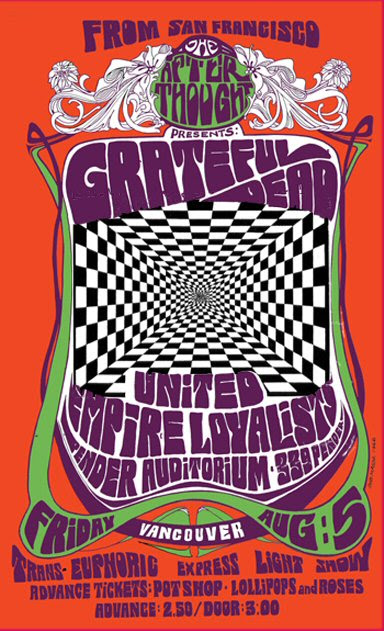 (The Bob Masse poster for the Grateful Dead's performance at the Pender Auditorium in Vancouver. H/t Ross for the scan)

Free outdoor concerts are an essential part of the story of the Grateful Dead and San Francisco rock. Part of the international fascination with the San Francisco music scene in 1967 was the idea that popular bands simply played for free in a  public park, and anyone who wanted to could come hear them. They weren't scheduled events, they just happened, because the musicians felt like playing. Such an idea was unprecedented in popular culture, and it had enormous ramifications. The Human Be-In of January 14, 1967 was picked up by the National TV networks, presaging the Summer of Love. By Spring there had been Be-Ins of different sorts around the country, and through 1968 at least, when the Grateful Dead or the Jefferson Airplane played a new city, they played somewhere for free in a public park.

Up until the Summer Of Love, making money in the Entertainment industry had been about reducing access, not granting it. Touring performers--whether 19th century opera singers, early 20th century vaudeville performers or late 20th century singers--made sure that their public performances were a rare and exclusive commodity. Musicians were initially nervous about the radio until they discovered that radio airplay increased audiences for public appearances, but of course a 2-minute recording was hardly an entire concert. As Television rose up in the 1950s, musicians and their managers rapidly figured out that TV appearances would increase ticket sales, but it too was a limited medium. As far as live appearances went, it was considered strategically important to make each show a special event, so that people would pay for the privilege. Playing for free was for unknowns, has-beens or the desperate.

In 1966 and 67, The Jefferson Airplane, Grateful Dead and other San Francisco bands were all headlining at the Fillmore and The Avalon. Their recording careers were just starting, but they were already stars around town, making a modest hippie living by headlining the local dance halls. It defied all business knowledge to simply play in the park for free. Ironically, however, the Dead and other bands' willingness to play for free evinced a confidence that the more you heard them, the more you would want to, to the point where you would pay for the privilege. In that respect, the Grateful Dead anticipated Internet marketing before the Internet was even invented.

It is particularly ironic then that the first free Grateful Dead performance in a public park actually took place not in San Francisco but in Stanley Park in Vancouver, British Columbia on Friday, August 5, 1966. The first Grateful Dead performance in the Panhandle, just East of Golden Gate Park and in the center of Haight Ashbury, did not take place until October 6, 1966. I am aware that there are various assertions (such as on Deadlists) that the Dead played for free in San Francisco in the Summer of 1966, but that is sadly wishful.

In fact, the Dead did not even live in San Francisco until around September of 1966. After they had moved from Palo Alto to Los Angeles in February of 1966, putting on Acid Tests with Owsley and the Pranksters, they returned not to San Francisco but Marin. They lived at Rancho Olampali, where many famous (and well-photographed) bacchanals took place, and then spent several weeks at a disused Summer camp in Western Marin. The band did not fully relocate to 710 Ashbury until September, so the chances of playing casually in San Francisco prior to that are fairly unlikely.

The Vancouver Trips Festival
The Grateful Dead and Big Brother and The Holding Company were invited to perform at the Vancouver Trips Festival from July 29 to 31, 1966. This event kicked off psychedelia in earnest in Vancouver. Vancouver, British Columbia, a free thinking seaport with balmy weather, had a very interesting music and arts scene in the 1960s. One of the peculiar characteristics of Canadian hippiedom, however, was that it had very little political strife attached to it, as Canada was neither involved in a ruinous war in Southeast Asia nor had a history of oppressing black people. As a result, though Vancouver hippies were no less enthusiastic than anyone else on the West Coast, the scene was more about music and the arts, with considerably less of the "Us vs Them" confrontation between straights and squares that characterized America in the 60s.

Vancouver promoter Jerry Kruz had a club called The Afterthought, which was putting on shows at the Pender Auditorium (at 399 Pender). He invited the Grateful Dead to stick around Vancouver and play a show on Friday, August 5, for which the above Bob Masse poster was made. Opening the show was a band of hip high school students, the United Empire Loyalists. Up until a few weeks earlier, they had called themselves The Molesters, as a cheeky joke, but Kruz told that they needed a more reasonable name if they expected it to be on rock posters around town, so they adopted the name of Americans who had resettled in Canada after the Revolutionary War. The Vancouver teenagers found themselves as the hosts of the Grateful Dead between Sunday's Trips Festival event and Friday's concert.

The band's website picks up the story from here, from drummer Richard Cruickshank:


However, between the Sunday and the Friday The Dead needed at least one practise; and unbeknownst to Richard's parents who were away on vacation, that practise ended up chez Cruickshank. The one problem lay in the location of the Cruickshank residence being in staid, upper middle-class West Vancouver: "Picture this: nobody'd seen people with hair that long - people with shoulder-length hair. Nobody here had hair that long!" remembers Richard.

Jeff [Ridley, the guitarist] also recalls: "So we all paraded into Dick's parents' place with The Grateful Dead and their hippie entourage and all the neighbours peering out from behind their curtains!"

"This was an upper middle-class neighbourhood of dentists and businessmen and retired people, and nobody could believe this was happening!" continues Richard, "They rehearsed on our equipment, and the neighbours could hear it. They made our equipment sound good too! As a sixteen year-old, you tend to think that you'll sound good when you can afford better gear. But there was not a single problem; the only damage that was caused was by me: I left a cigarette in an ashtray which burned a hole in the top of my parents' stereo cabinet. And all our food went missing - the fridge was empty, but at least it was clean! They were the nicest people as I remember them, really sweet guys. Very good people." Naturally, after the practise extended well into the evening and eventually turned into a party, a neighbour did call the police and shut the festivities down.

Then comes the interesting part. By Friday, the Loyalists are driving around Vancouver in the band's van, when serendipity strikes. Ridley:

"They wanted to do some publicity for the gig they were playing that night so they were driving around Vancouver and saw the bandstand at English Bay. Without getting any permission, they decided they'd play there; they set up and were promptly shut down by the police. Everywhere they went they got shut down! Another time they were planning on playing Kits Beach on a flatbed truck which was all set up for that and we opened up. But by the time we finished out set the cops had already arrived and shut the whole thing down and again they didn't play."

Stanley Park is a huge bayside park on the water, and English Bay is on the Western edge of the city. There appear to be a number of bandstands on the English Bay side of Stanley Park, which may have been revised considerably over the decades, so I will leave it to British Columbians (past or present) to attempt to parse the exact location of the performances. Rock Scully recounts another version of the story, from the Dead's point of view, and I have read another interview with a Loyalist that recaps the stories as well.

The essence of it seems to have been that the Dead simply pulled up to a stage in Vancouver's largest public park, set up quickly and began to play. After a few numbers the police came along and shut it down, since the Dead had no permission whatsoever. Since it was Vancouver and not America, however, while the cops can hardly have been pleased, there was no harassment or hostility as there would have been with American police. So the Dead of course simply followed the teenagers directions to another bandstand and pulled the stunt again, until the cops came, and then again (at Kits Beach), this time letting the Loyalists play a number before the police stepped in.

By the time of Friday night's show at the Auditorium, there must have been some kind of buzz around town, since the gig seems to have gone off well. By the time the Grateful Dead return to California and migrate into San Francisco (once Rock Scully and Danny Rifkin have found room for them at 710 Ashbury), the Dead adopt the San Francisco version of the Vancouver trip. Starting with the Panhandle show on the day LSD was made illegal in California (October 6, 1966), the Dead and then other groups made a regular habit of appearing in the Panhandle and Golden Gate Park without even beginning to ask for permission. Similar events started to occur in Berkeley, in Provo Park, and bands rapidly figured out that without an album there was no better way to get heard. The implicit confidence that the more you heard a band the more you would want to hear of them evoked the idea that San Francisco rock bands were making Art, not just disposable entertainment.

The Grateful Dead's final free concert was November 3, 1991 at the Polo Grounds, in a memorial to Bill Graham.

The Afterthought moved from Pender Auditorium to the Kitsilano Theatre at 2214 West 4th. It closed by 1969, but it was fondly remembered (along with the Retinal Circus) from the golden age of Vancouver psychedelia.

The United Empire Loyalists, after having spent a day racing around Vancouver playing guerilla shows with The Grateful Dead, decide that its a rock and rollers life for them and become one of Vancouver's leading underground bands. They were a popular and successful band in Vancouver, although save for one single they did not release an album while they were still together, because Vancouver wasn't a big enough market. The band managed to have some remarkable adventures, including opening for Cream and nearly becoming Country Joe McDonald's backing band (too long a saga to explain here), but the group started to split up by 1969, and completely ended in 1970. Fortunately, however, a 1998 cd of demos and live performances gives a good idea of their sound.

Afterthought on The Afterthought
Existing lists of Grateful Dead concerts show the band playing the Afterthought (at Pender Auditorium) in Vancouver on Friday and Saturday, August 5 and 6, 1966. In fact, the poster (above) does not support that--it clearly states the band as playing only August 5. Initially, I thought that there may have been no gig on Saturday, August 6, but apparently the Bob Masse poster is commemorative, so the Dead very well could have played Saturday night as well.

The next Grateful Dead gig was Sunday August 7 at the Fillmore, which doesn't answer the question either way.