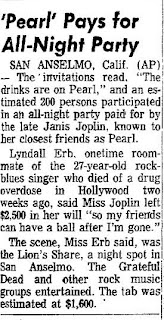 (Update: a Commenter has shown that the Janis wake was on Monday, October 26, 1970. The general thrust of this post is true, but I now think that Jerry Garcia flew back after the St. Louis show on October 24 and then again the next week. See below for further details)

The Grateful Dead toured the East Coast extensively in October and November 1970. From October 10 through 31, playing mostly weekends, they criscrossed the East and Midwest, going from Queens (Oct 10) to St. Louis, MO (Oct 24) and back to Long Island for some famous shows at Stony Brook on October 30 and 31. The tour picked up again the next Thursday (Nov 5) for an epic stand at Port Chester, followed by extensive touring up and down the Eastern seaboard throughout November. An alert researcher, however, pointed out that not only are there PERRO tapes from San Francisco with Jerry Garcia dated November 3 and 4, there is evidence of a booked New Riders gig in San Francisco on Halloween weekend. This begs the question: why would Jerry race home that quickly for a tiny gig, knowing he was going to return to the East Coast just 5 days later?

A November 3 AP Wire story, published in many newspapers, gives the answer. Janis Joplin, who had died October 4, had left instructions in her will to throw a giant party for all her friends. The AP story says


'Pearl' Pays For All-Night Party
San Anselmo, CA (AP)
The invitations read "The drinks are on Pearl," and an estimated 200 persons participated in an all-night party paid for by the late Janis Joplin, known to her closest friends as Pearl.

Lyndall Earb, onetime roommate of the 27-year-old rock-blues singer, who died of a drug overdose in Hollywood two weeks ago, said Miss Joplin left $2,500 in her will "so my friends can have a ball after I'm gone."

The scene, Miss Earb said, was The Lions Share, a night spot in San Anselmo. The Grateful Dead and other rock music groups entertained. The tab was estimated at $1,600.

The article appears in a variety of newspapers on November 3 (I used a clipping from the Appleton, WI Post-Crescent from November 7 because it was easier to read). The party could have been no later than Monday November 2, and if it was an all-night party it could not have appeared in newspapers on the 3rd, so that points to an event on Sunday, November 1, extending well into the early morning of Monday Nov 2. Monday is typically the working musician's weekend, so Sunday night is a good time for an all-night bash.

A number of timeline threads fall into place:

The Lions Share was a tiny club at 60 Red Hill in San Anselmo. It was mainly a musicians hangout. Throughout much of 1970, the house band had been called Nu Boogaloo Express, featuring Mike Finnegan or Bill Champlin alternating on keyboards and vocals, and other local players like Danny Nudalman (guitar) Dave Schallock (bass or guitar) and Bill Vitt (drums), but I do not know if they were still featured there. Local residents like Phil Lesh or Van Morrison regularly hung out or played there.

I doubt the Dead played a formal show, and they wouldn't have had their equipment, but the jams must have been pretty interesting. Of course, no one who was there probably remembers a thing, and the one guy who could have been counted on to tape the proceedings, Augustus Owsley Stanley III, was not available due to a prior booking (at the Terminal Island Correctional Facility in San Pedro).

Update: an intrepid researcher has found a copy of the actual invitation, which puts the Janis Joplin wake definitively on Monday, October 26.  The general thrust is still true here, in that the Grateful Dead flew home for the wake, but they did it between St. Louis and Stony Brook, thus answering the question of their activities during that time. It still appears that Garcia, at least, flew back to San Francisco between the Stony Brook and Port Chester shows, based on the dating of the PERRO sessions and the likely performance at the Harding.
Posted by Corry342 at 12:56 PM