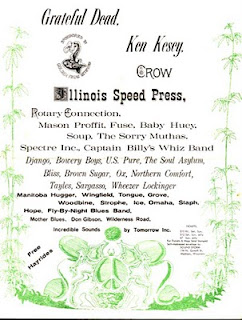 The Grateful Dead are intimately connected to the history of outdoor rock festivals. The Dead's first free outdoor performance was actually in Stanley Park in Vancouver on August 5, 1966. The then-underground Grateful Dead needed a way to publicize their shows in Vancouver, so they spent the day with a flatbed truck, playing hit and run songs in the park, guided by the teenagers in the opening band (The United Empire Loyalists), playing a few numbers before the local cops chased them away. This strategy caught on in San Francisco, but the expensive and popular nature of rock music forced outdoor rock festivals to turn into more commercial events.

The first rock festival on a field on private property was certainly the "Piano Drop" on Van Over Farm in Duvall, WA on April 28, 1968, featuring Country Joe and The Fish and a piano dropped from a helicopter. This was followed up by the three day Sky River Rock Festival and Lighter Than Air Fair on an organic raspberry farm in Sultan, WA. From August 31 through September 2, dozens of California, Oregon and Washington bands, along with a few out-of-towners (like Pink Floyd) kept the music going for three straight days over Labor Day weekend. The Dead heard about the fun Friday night and flew up to join in, playing Monday (Sep 2).

The Woodstock and Altamont Festivals in 1969 are the most famous Rock Festivals, since there were popular movies made of both of them. While those two events are rightly famous, the fact is there were attempts to hold large outdoor rock festivals all over the country in 1969 and 1970, so every region had their own "Woodstock"(good) or "Altamont" (bad). Almost all rock fans of a certain age those two Summers either attended a giant outdoor festival, tried to attend one, were not allowed to (by parents or the military) or refused to join their friends in attending one. While not every rock festival had a movie or an album, the experiences were just as memorable--good or bad--for the thousands of people who attended each one.

By 1969, the Grateful Dead were legendary, but not particularly successful. They had various financial problems, and substantial debts to Warner Bros (incurred in recording Aoxomoxoa) insured that album royalties would be close to non-existent. This left the band little choice but to make money as a touring outfit, but fortunately they loved to play. Jerry Garcia has commented various times that he saw the Dead as carrying on the Prankster tradition, bringing psychedelic consciousness to places it hadn't been yet. Some rock festivals had substantial backers (like the ones at Woodstock, Texas or Louisiana in  Summer 1969), so they were able to book a slew of well-known bands. Yet many other rock festivals were the hopes and dreams of some inspired locals, and regular touring acts were considerably less likely to take a chance on a long journey into the countryside with an inexperienced promoter, risking no payday and worse.

The Sound Storm, held at the York Farm in Poynette, WI from April 24-16, 1970 was one such festival. The vision of local promoter Peter Obranovich, it was a determined effort to bring a hippie rock festival to Wisconsin. Tiny Poynette was just 30 miles North of Madison, and 100 miles West of Milwuakee, but 79-year old Irene York heard about the promoters efforts to find a venue, and offered her family farm. The town was in an uproar, but there was little they could do legally to stop the event, as it was held on private property.

Although Obranovich and his partners in Golden Freak Enterprises had never put on a rock festival, since almost nobody had, he wasn't completely naive. He had spent time in San Francisco, Oregon and Washington, had visited Ken Kesey's farm and had helped the Grateful Dead move equipment when they played the Northwest. There were a number of rock festivals in Oregon and Washington in 1968 and 1969, so he seems to have had some idea of what he was attempting. The sound equipment was hired from the Kinetic Playground in Chicago, and money was raised by selling concessions for food and drink in advance.

Since Obranovich knew the Grateful Dead, he was able to hire the band to headline the Festival. There were numerous bands on the bill, but they were all local bands, with a few regional acts from Chicago, like Rotary Connection, Mason Profitt and Illinois Speed Press (which I have commented on here). Obranovich was friendly with Jerry Garcia, so the Grateful Dead agreed to play for $9,500, which was well within the promoter's budget. The Dead were playing Friday and Saturday night at the Mammoth Gardens in Denver, so the extra Sunday gig fit in nicely with their touring schedule.

With the Grateful Dead as headliner, with their Fillmore-and-Woodstock pedigree, the show had the indelible stamp of a real rock festival, not just some local fun in the sun. The town was frantic, of course, since the Dead were seen as the harbingers of doom, bringing bikers, drugs and loose morals to the hitherto peaceful Wisconsin countryside. Sound Storm had little national impact, but it was the biggest event in Wisconsin rock history up to that point (and perhaps after), and although the event was well off the radar for most folks, Sound Storm was an event of great importance to that state.

Over the course of the weekend, about 30,000 people seem to have showed up. That wasn't large by big city or Woodstock standards, but it was the largest event that rural county had ever seen. The weather was perfect, the police took an appropriately hands off attitude, there was enough food and supplies, and the music went on around the clock. While there seem to have been plenty of drugs, they appear to have been the sort that make people relax, and there were few arrests. Local shopkeepers appreciated the fact that almost every single item in their stores was purchased. The AP Wire story (from a Wisconsin paper, the Stevens Point Daily Journal) anxiously reported in Saturday's edition (April 25, 1970) that everything seemed manageable, but the air of expectation hangs over the article. Up until this point, it was just sort of a regional event--what would happen when the headliners made their appearance, if in fact they did?

After flying in from Denver, The Grateful Dead arrived in Wisconsin and were driven to the site in a station wagon. The Dead began their set at about 2:30 pm on Sunday, April 26 on a bright, sunny day with the temperature in the 70s. The Dead were only contractually obligated for a 50-minute set, but the tour was just beginning, the band was feeling good and everything was flowing, so instead they played three sets until 7:30 pm. Memories were frazzled by events, but everyone recalls a fantastic performance and to begin the third set, Phil Lesh announced "we're going to do a Sunset Raga," and the band launched into "Dark Star."

The Dead had a reputation for blowing the big ones, like Woodstock or New Year's Eve. They also had a reputation for delivering a knockout blow in the unlikeliest of locations, like a gymnasium in Binghamton, NY just a few weeks later (or a deserted sports arena in Fresno in 1978). The hippies who organized and attended Sound Storm had the Grateful Dead as headliners because they were an integral part of the 60s rock explosion and everything associated with it. By all accounts, this was one of the winners: hippies who had driven a long way, and camped out, and put up with all sorts of things just to see a big-time headliner got a show for the ages, hours and hours of jamming on a perfect Spring day, reminding everyone how transporting great live rock music could be.

Sound Storm and the weekend at the York Farm in Poynette, WI seemed destined to remain a fond yet fuzzily recalled rumor, one of those events that may or may not have occurred in the manner in which it is recalled. Remarkably, however, esteemed historian Michael Edmonds has researched the history of Sound Storm in extraordinary detail, and the story will be told in the March 2010 issue of the Wisconsin Magazine of History. Even more remarkably, Edmonds discovered numerous unpublished photos of the Grateful Dead and other bands.

Unfortunately, according to Edmonds, as the concert wound down the tired organizers lost track of most of their gate receipts and also the tape of the concert. Sound Storm was the pinnacle of Wisconsin 60s hippiedom, but it ended in a financial bath for Golden Freak Enterprises. Nonetheless, photos turned up after all these years, so maybe a tape will too. And here's to hoping that there's missing treasure trove like this one for The Bullfrog Festival (August 23, 1969, Helens, OR) or Reed's Ranch (July 3, 1969, Colorado Springs, CO).

(thanks to Michael Edmonds for explaining what really happened--look for a great article in the March 2010 Wisconsin Magazine of History. For more information about the other bands at Sound Storm, see here).