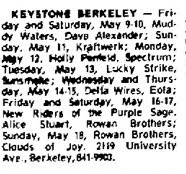 In a previous post, I pointed at evidence that Jerry Garcia played New Year's Eve shows at Keystone Berkeley under the name Lucky Strike, as the Keystone billings for both 1974 and 1975 listed "Lucky Strike" as the band. I mused that scholars should start looking for Lucky Strike billed at the Keystone.

Lo and behold, here are the Oakland Tribune listings (above) from Sunday, May 11, 1975 for the Keystone Berkeley, and the Hayward Daily Review listings for May 9, 1975 (right). The acts for the week are

The significant clue here is that according to the Jerry Site, Deadbase lists a Legion Of Mary show at Keystone Berkeley on May 12, 1975, complete with setlist. Now, "Lucky Strike" was booked for Tuesday May 13, but I am now much more inclined to believe that there was a Keystone Berkeley show this week. I would lean towards the May 13 date, under the circumstances.

I grew up in the Bay Area, and read the San Francisco Chronicle "Pink Section" entertainment listings with an eagle eye every Sunday, and I had no idea about Lucky Strike.

(update: Despite the awesomeness of my theory, it appears that it isn't true, and Lucky Strike was a local East Bay Band)

Footnotes
I cannot resist commenting on the other bands.

Kraftwerk/Paul Pena
Kraftwerk had become almost sort of semi-famous behind their 1974 Autobahn album, and did their only American tour. Their show had been booked for Berkeley Community Theater, but poor ticket sales caused it to be moved to the Keystone Berkeley. Kraftwerk is hard to explain if you don't know, and their impact at the time is even harder to comprehend. Suffice to say, America was not ready for Beach Boys influenced German industrial pop. Joel Selvin wrote perhaps his greatest review ever for this show.

Paul Pena, a Keystone Berkeley regular, was a blind guitarist and songwriter who wrote "Jet Airliner" for Steve Miller. He was a strange choice to open for Kraftwerk, but so was everyone else in the East Bay at the time.

Alice Stuart
Alice Stuart had been playing Berkeley and the East Bay since 1964, with a few interruptions (like briefly joining the Mothers of Invention in 1966). At this time, she was probably playing with her electric trio.