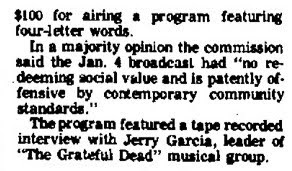 The "Washington Wire" of the Kokomo (IN) Tribune includes the following brief AP Wire story:


In a majority opinion the commission said the Jan. 4 broadcast had "no redeeming social value and is patently offensive by contemporary community standards."


The Dead were playing Fillmore East on January 2 and 3, 1970, and no doubt a Philly dj got a backstage interview with Jerry, who must have used the dreaded f-word at some point. Anticipating Michael Powell and the Bush-era FCC, the broadcast seems to have been deemed to have been of no redeeming social value.