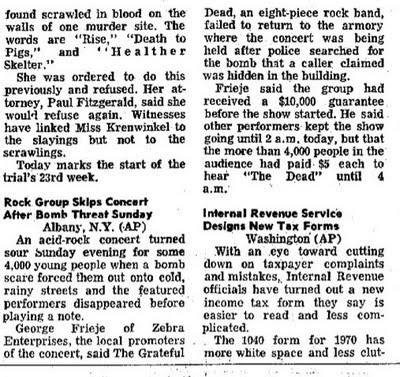 The AP Wire story from the Monday, October 16, 1970 edition of the Edwardsville (IL) Intelligencer is worth repeating in its entirety.


Rock Group Skips Concert After Bomb Threat Sunday
Albany, N.Y. (AP)
An acid-rock concert turned sour Sunday evening for some 4,000 young people when a bomb scare forced them out onto cold, rainy streets and the featured performers disappeared before playing a note.


George Frieje of Zebra Enterprises, the local promoters of the concert, said The Grateful Dead, an eight-piece rock band, failed to return to the Armory where the concert was being held after police searched for a bomb that a caller claimed was hidden in the building.


Frieje said that the performers had received a $10,000 guarantee before the show started. He said that other performers kept the showing until 2am today, but that 4,000 people had paid $5 each to hear "The Dead" until 4am.


Let's recap what we have here:
Good times, good times.

The Dead had just finished a 4-night run at the 46th Street Rock Palace in Brooklyn from November 11 thru 14 (Wednesday thru Saturday). They returned to New York to play a gig on the fly at the Fillmore East on Monday, May 16, 1970 with Hot Tuna (the Fillmore East was usually dark on Mondays, and this gig was added at the last minute).

Does anyone know who the other performers were? I'll bet there's a great story behind this, and I bet no one will ever tell it.

P.S. Incidentally, why are the Dead being referred to as an "eight-piece band?" I realize its probably just a meaningless mistake, but its more fun to think that Jack and Jorma were band members for the night.
Posted by Corry342 at 6:12 PM