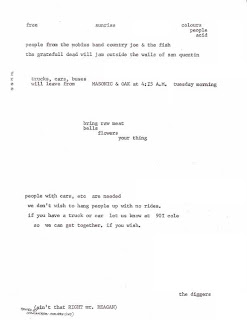 I am assuming that what you are about to read may be somewhat controversial as I am proposing a date for a previously undocumented Grateful Dead/Country Joe and The Fish show and I am proposing that the date of an existing show is incorrectly recorded by Deadbase. So here goes.

We start our little sojourn with this hitherto undated, at least by me, Grateful Dead/Country Joe and The Fish performance that I believe was scheduled for April 11, 1967. The event was organised by The Diggers, although quite how many people would have been available at four in the morning is unclear.

It is my belief that this event was organised as of the planned protests and vigil leading up to the execution of Aaron Mitchell on the morning of April 12, 1967. Having looked through contemporary documentation it is clear that this was a significant event – significant enough to draw the residents of the Bay Area north to the prison gates. When Aaron Mitchell died in San Quentin’s gas chamber he became the first person executed by the state in more than four years and the only person executed during the tenure of Ronald Reagan as State Governor. And you will note the question posed to Mr Reagan at the foot of the handbill - noting that Mr Reagan had stated that he saw capital punishment as a deterrent.

Reviews of the events of the previous 24 hours identified a lot of comings and goings at the prison with 250 protesters present at the time of the 10:00am execution and records of a lone harmonica player, a hippie band on a flatbed truck, and all of the church bells peeling at the time of the execution. As the item is undated I considered a number of other options that might have led the Diggers to organise such a protest – but none seemed significant enough or provide a good fit the timescales – between January and August 1967 – and more realistically between March and June 1967.

The handbill was printed by the Communication Company – who operated as the communications arm of the Diggers between January and August 1967. ComCo used their Gestetner 366 stencil duplicator (that was borrowed from the offices of Ramparts by Chester Anderson) to produce something of the order of 900 separate flyers during their brief existence. By June of 1967 Chester Anderson, together with his partners Claude and Helene Hayward, was being eased out of ComCo and on August 15 he was formally banned from entering the premises at all.

I also took a look at the schedules of both bands for the week – the Grateful Dead playing the Panhandle on the afternoon of April 9 and Longshoreman’s in the evening and on April 12 they played the Busted Mime Troupe Benefit before heading of to Los Angeles. More significantly, this was the Week of The Angry Arts part of the Spring Mobilization against the war in Vietnam and one of the busiest in the history of Country Joe and The Fish:

Assuming the San Quentin show went ahead, I concluded that April 11, 1967 fits best because of the involvement of both bands with the Diggers during a week of protest, the significant event at San Quentin, and the other facts fitting well as explained above. I wasn’t going to mention it, but the handbill urges people to bring raw meat and this could well be a reference to the impending event at San Quentin. 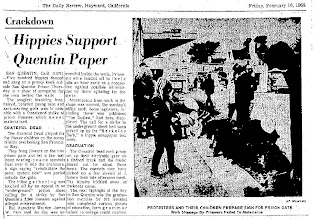 February 15, 1968 - San Quentin Prison, San Francisco, CA Country Joe and The Fish, Grateful Dead, Phoenix and members of the Jefferson Airplane. I have never really understood why the February 15, 1968 is more often than not misdated as March 7, 1968. Deadbase and dead.net both misdate this show as being on March 7 – and I would guess that the erroneous entry in Deadbase is the reason many other lists are incorrect. There is plenty of evidence supporting the February 15 date: (a) a mention at the end of the February 14 Valentine’s Day show at the Carousel that both bands would be playing for free outside San Quentin the following afternoon; (b) contemporary reports regarding the performances (c) photographs of the performers; (d) memories of a number of the performers; (e) and not least, Country Joe and The Fish were in New York on March 7.

On the basis of this evidence, I am very confident that the March 7 date is incorrect and the February 15 is correct.
Posted by The Yellow Shark at 2:22 AM